In Kashmir where the year has four clear seasons, my mother spoke of her childhood in the plains of Lucknow, and of that season in itself, the monsoon, when Krishna’s flute is heard on the shores of the Jamuna. While children run out into the alleys, soaking their utter summer, messages pass between lovers. Heer and Ranjha and others from legends, their love forbidden, burned incense all night, waiting for answers. My mother hummed Heer’s lament but never told me if she also burned sticks of jasmine that, dying, kept raising soft necks of ash. I imagined each neck leaning on the humid air. She only said: The monsoons never cross the mountains into Kashmir.
Agha Shahid Ali A disputed land between India and Pakistan since 1947, Kashmir is today one of the most militarized zones in the world. Soon after gaining independence from the British Empire, the two countries fought a war over Kashmir until the end of 1948. In the same year, the United Nations Security Council adopted the Resolution 47, urging the preparation of a plebiscite in order to let the Kashmiri people decide whether to join India or Pakistan. No such plebiscite has ever been held. Since the Nineties, Kashmir has been witnessing various political uprising against the Indian administration. Every time the Kashmiri people fought for Azadi (“freedom”, in Urdu), their struggle has been silenced with blood. Despite the unpredictable new season of protests, repression and martyrs, the situation has still not changed. The systematic violation of human rights perpetrated by Indian security forces has filled the hearts of Kashmiri men and women with disillusionment, resentment and sorrow. “Monsoons never cross the mountains” is a visual journey through the struggle of the Kashmiri people, trapped in an endless season of sorrow while waiting for the spring of Azadi. It is an attempt to depict the emotional landscape of the valley of Kashmir through the eyes of children, entangled in this cycle from the beginning of their life. 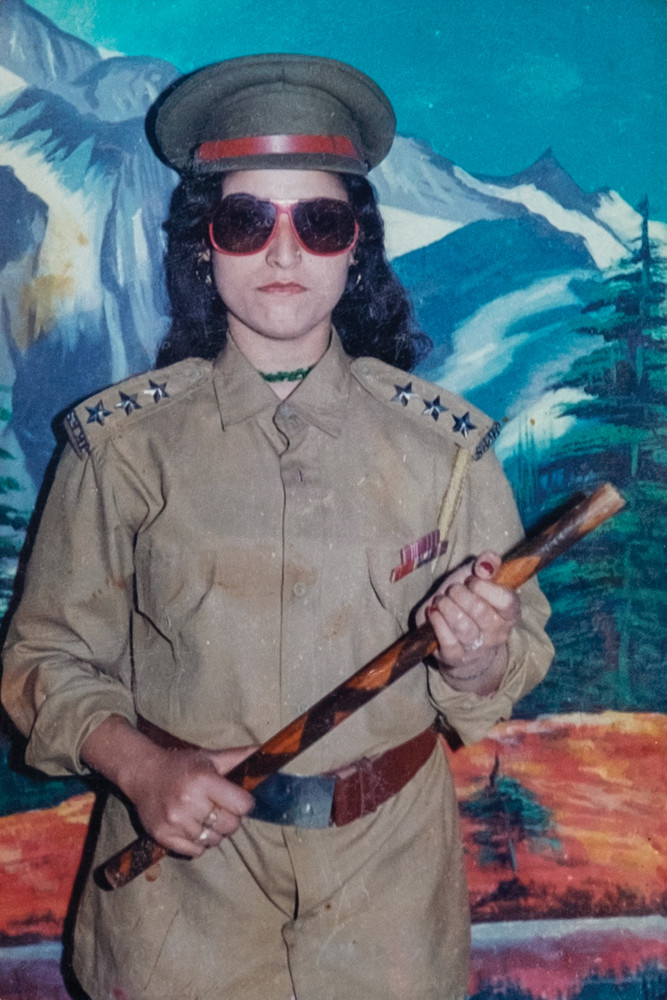 Z. family photo albums taken in a photo studio in Srinagar in the 90s. 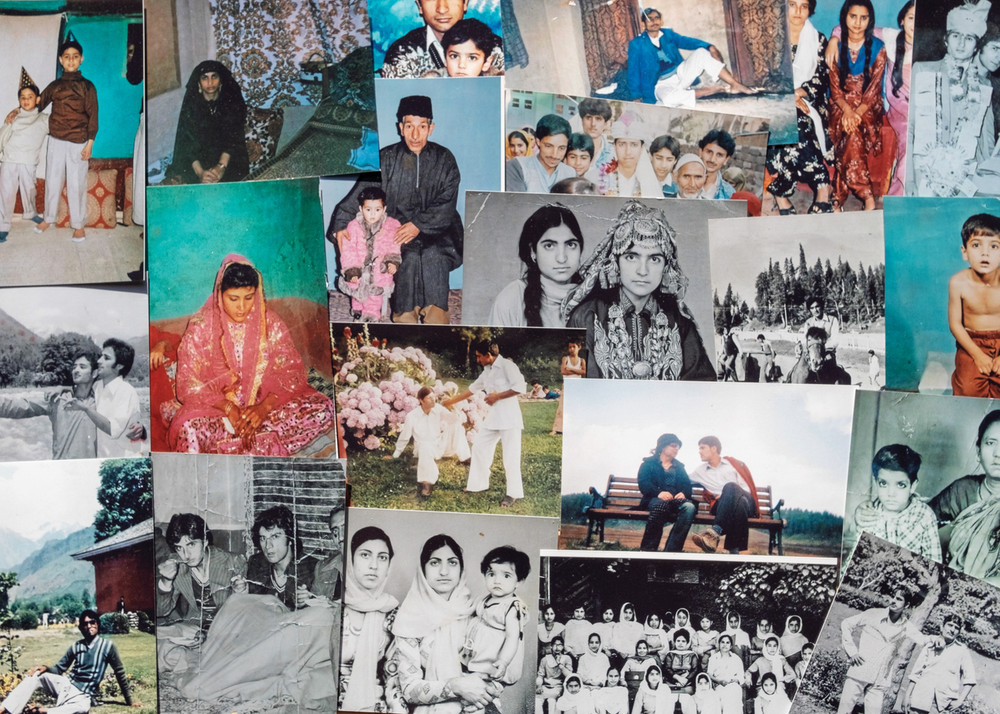 Collage of childhood photos and the relatives of Z. and B. from the 90s, during the armed guerrilla warfare against the Indian army. The security forces raged against the civilian population, carrying out atrocities of all kinds. In the collective and individual memory of those who lived through that period, we find the traces of a violent past that has never been resolved, unredeemed. These images want to point out the importance of memory within the question Kashmiri politics, as an engine of resentment towards India. 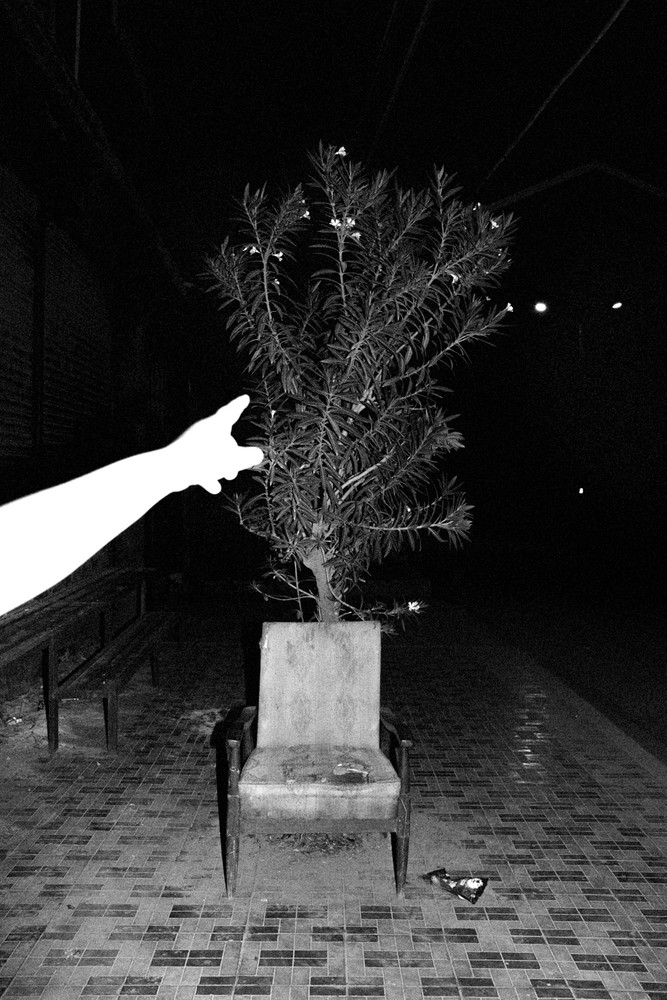 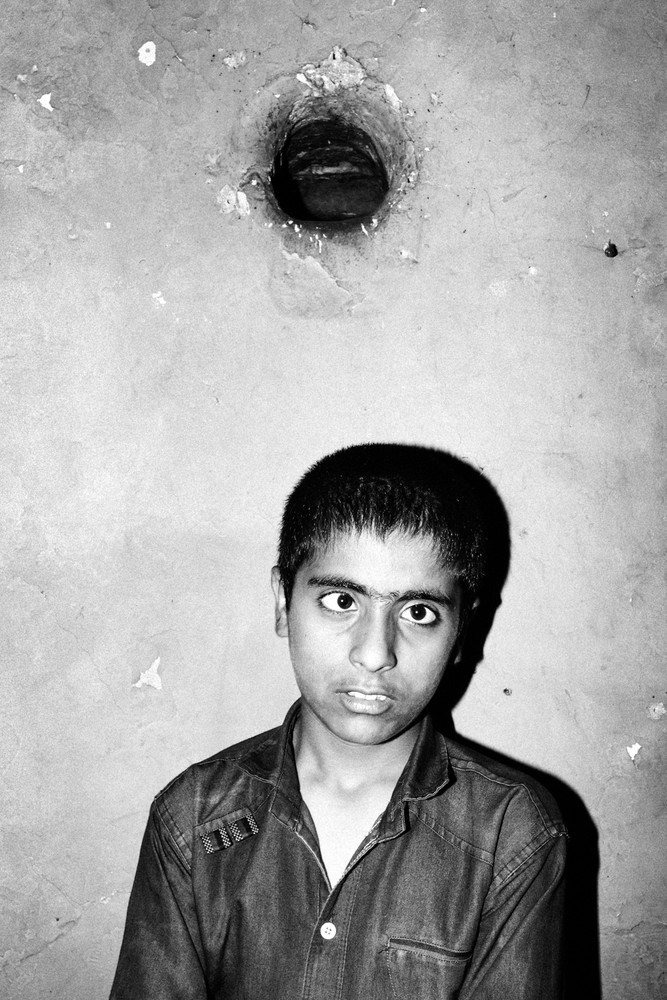 A young boy poses in Firdous cinema, where he lives with his family. The cinema was closed during the 90’s by the kashmiri rebel fighters deemed un-Islamic, was then occupied by the Indian army and eventually abandoned in the last years. 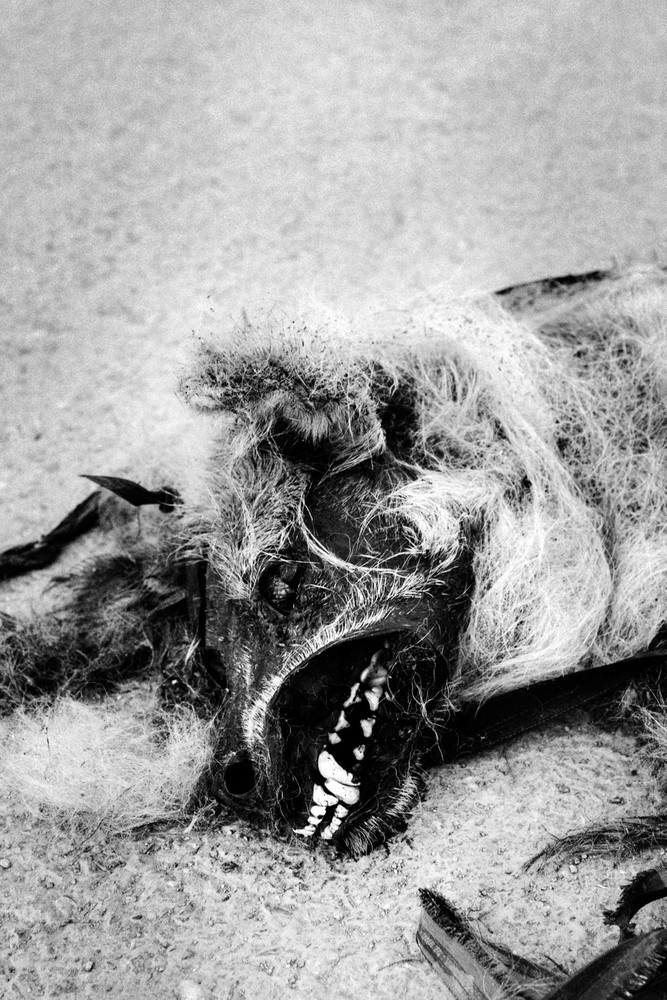 The carcass of a dog/wolf laying in the street of Dawar, Gurez Valley, just next to Pakistan border. 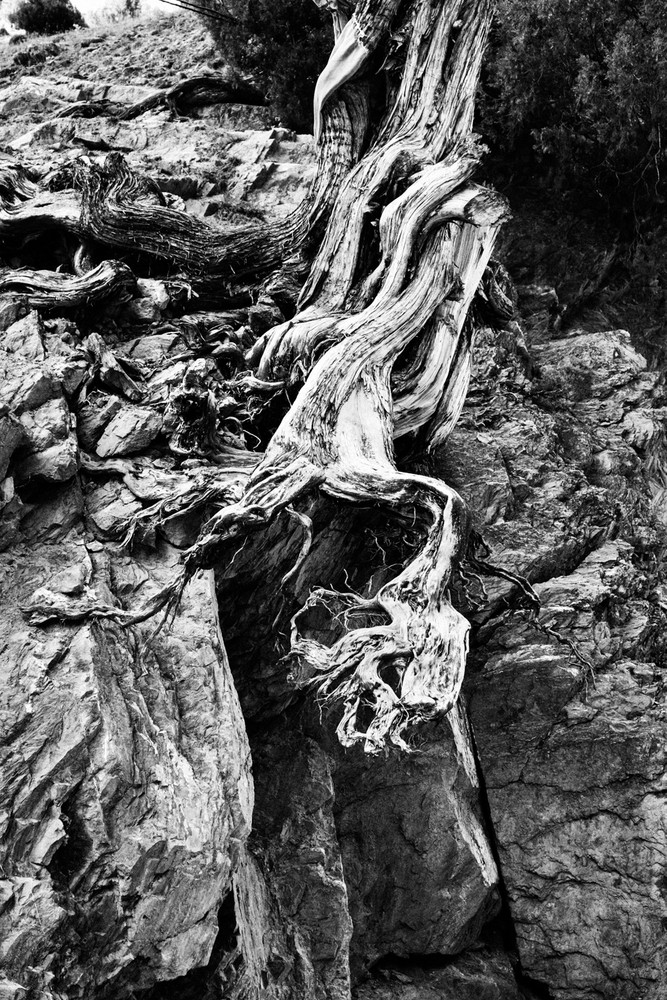 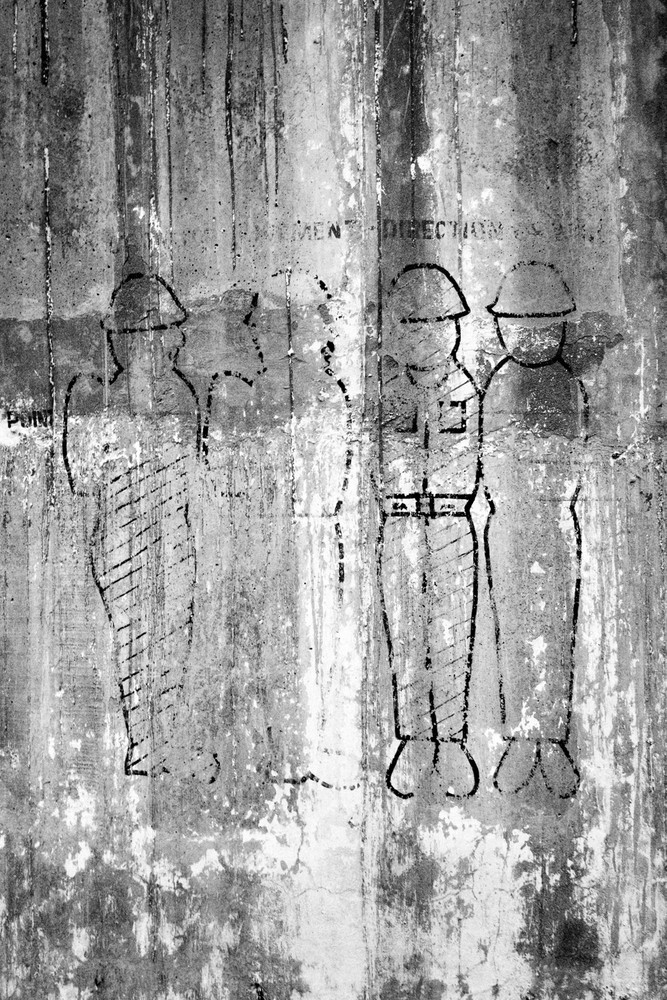 Graffiti inside an Indian army camp. 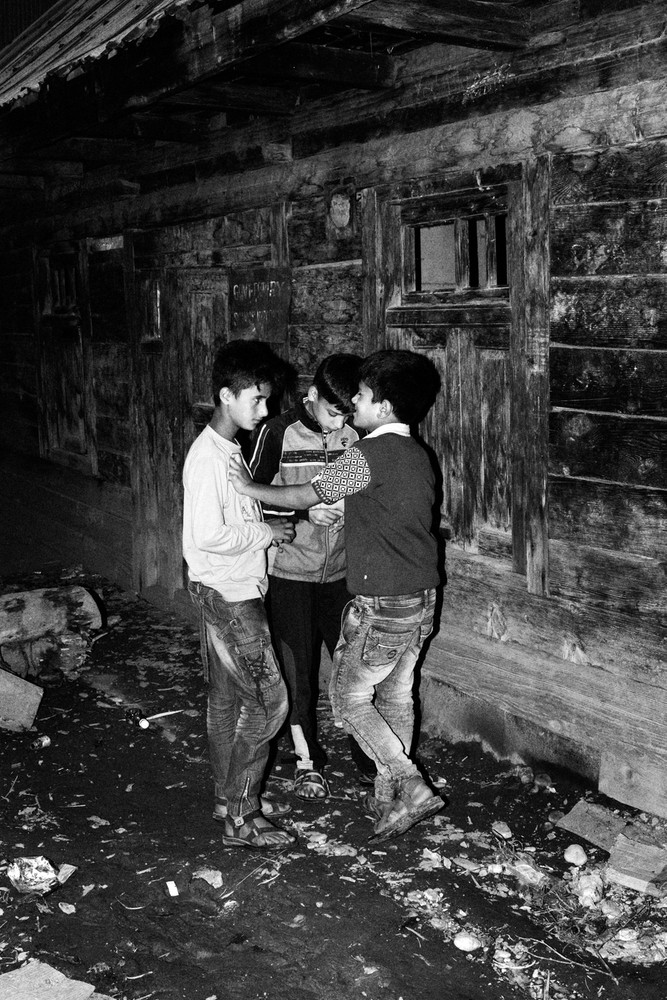 A group of children fighting in a remote village of the Gurez Valley, on the border with Pakistan. 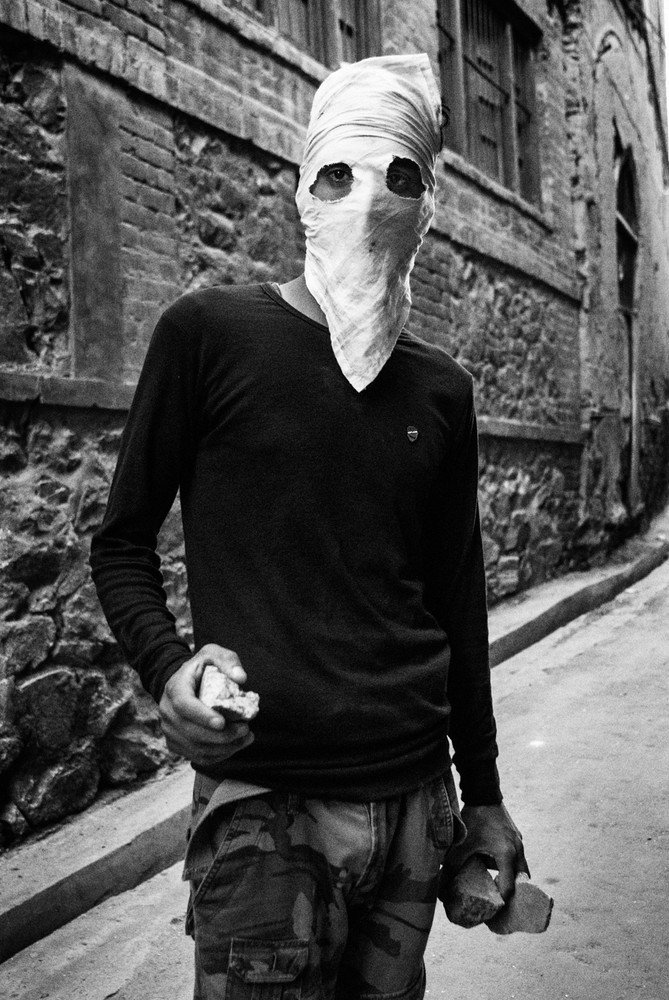 A boy poses holding stones in the alley of the old city of Srinagar during the clash with the Indian security forces. 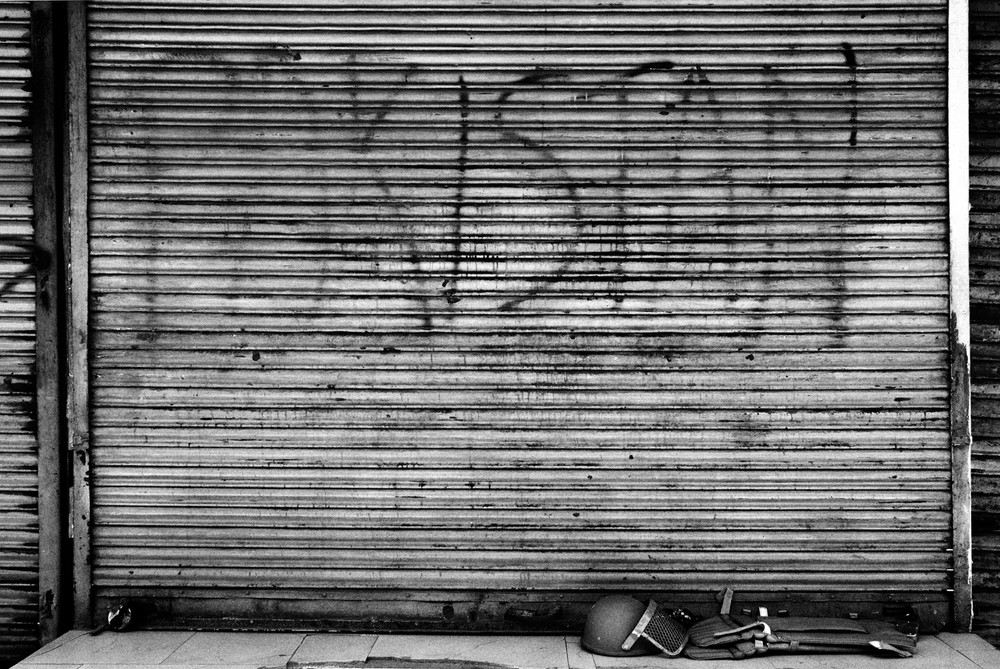 A graffiti during the curfew in Srinagar. 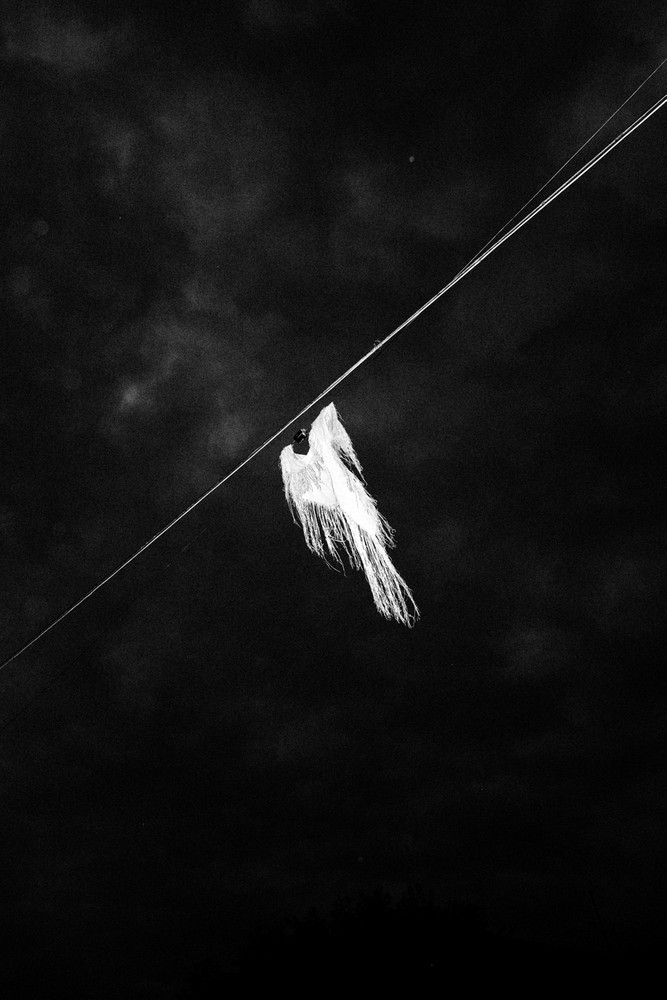 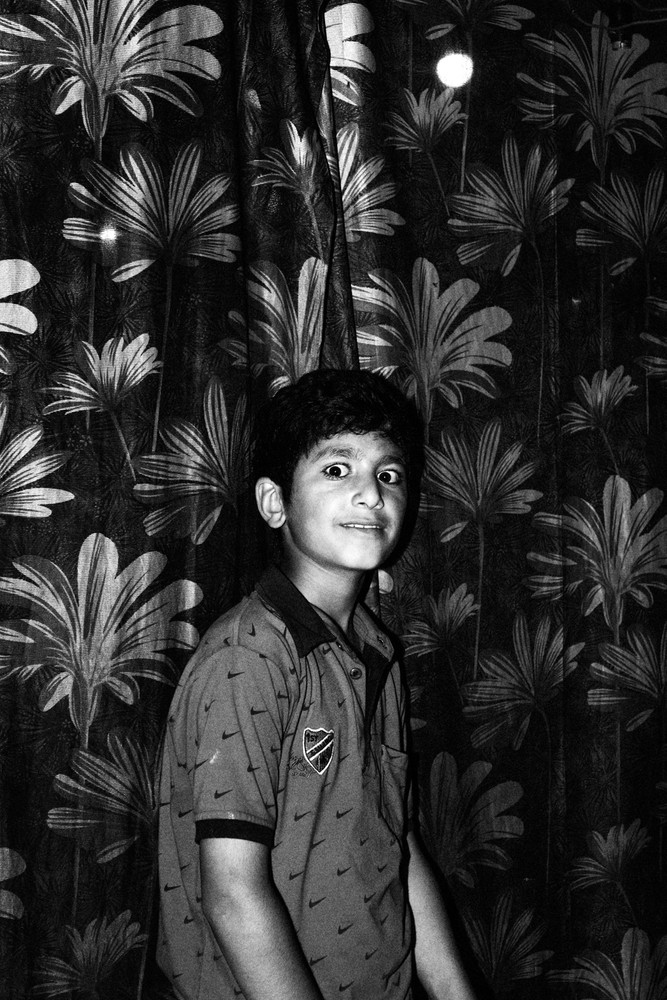 A boy posing in his small shop on the street of Srinagar. 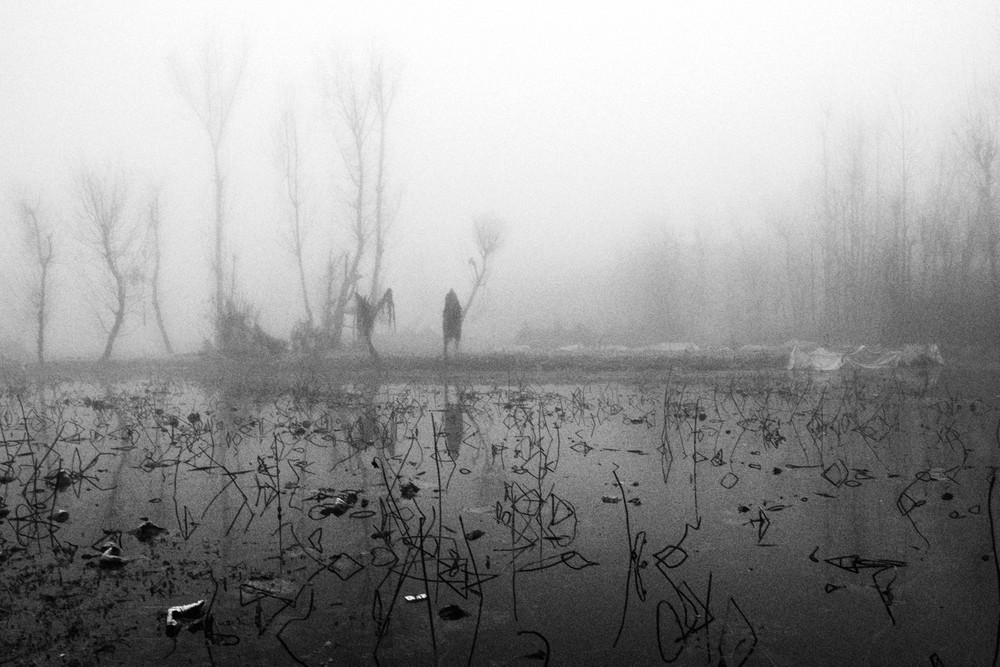 The Dal Lake at dawn during the winter. 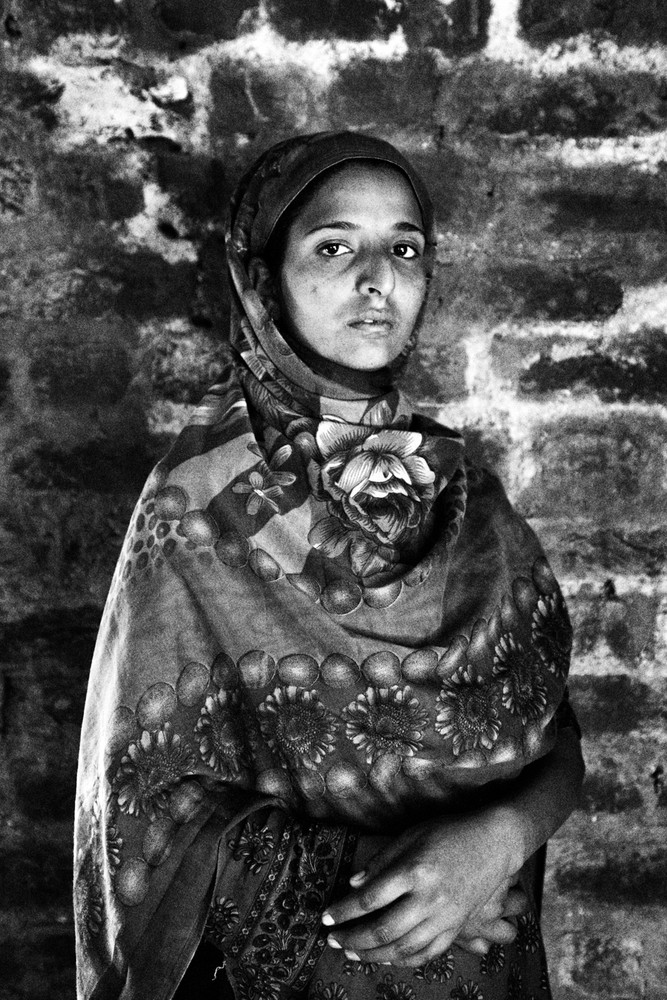 Mumtaz, 23 years old, poses in his house in the outskirt of Srinagar. 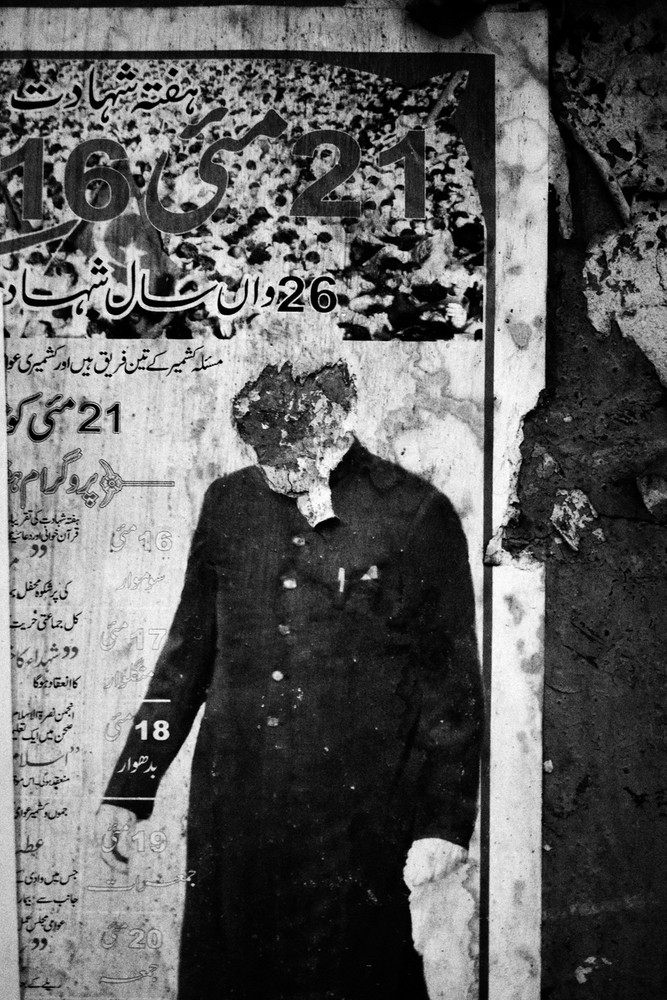 Poster of the procession called for Martyrs’ Day, organized by separatist leaders every year on 1May. On this date they commemorate the death of Mirwaiz Farooq, separatist leaderi killed in 1990. The killers have never been identified. 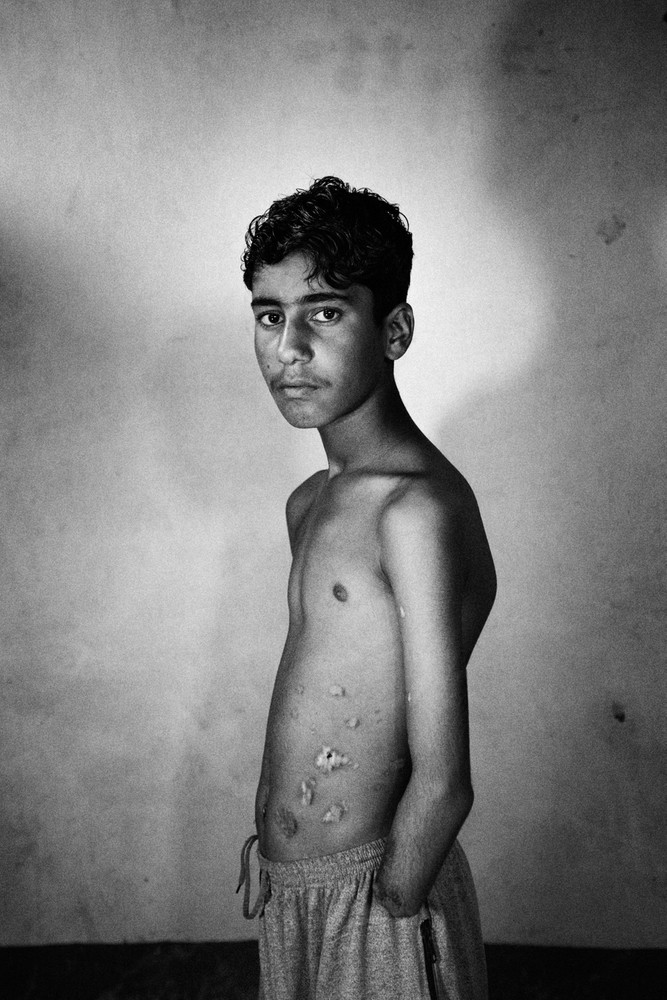 Sahil Rashid Lone, 14 years old, and his two friend were injured in a blast in Pazalpolra, a remote village in north Kashmir in 2017. The boys touched the explosive that was abandoned there after an encounter between the indian army and kashmiri rebels. The mother recall that day: “they were playing in the field then i heard the blast. I saw my son laying on the ground so i grabbed him and run to the army camp nearby asking for a vehicle for taking him to the hospital. The soldiers replied they don’t use their vehicle for such purposes”. The family buried Sahil’s hand in the backyard of their house.

The firing range in the Hari Parbat fort (Srinagar), builded by Mughal emperor Akbar in the 16th century, and converted into and army camp by the Indian forces since decades. 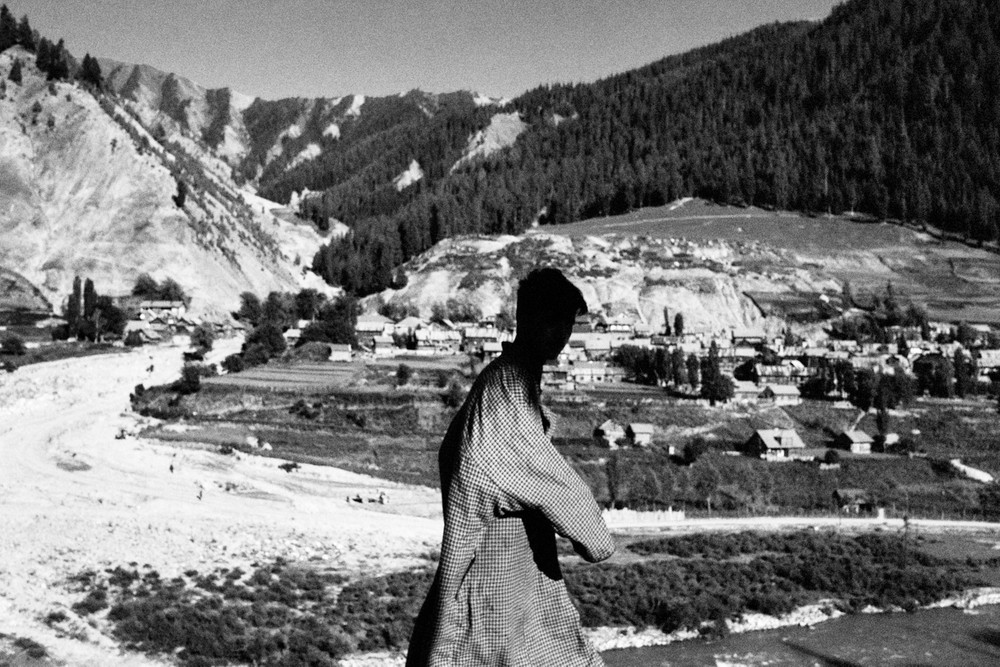 A boy walks into a remote village where the border between India and Pakistan crosses. 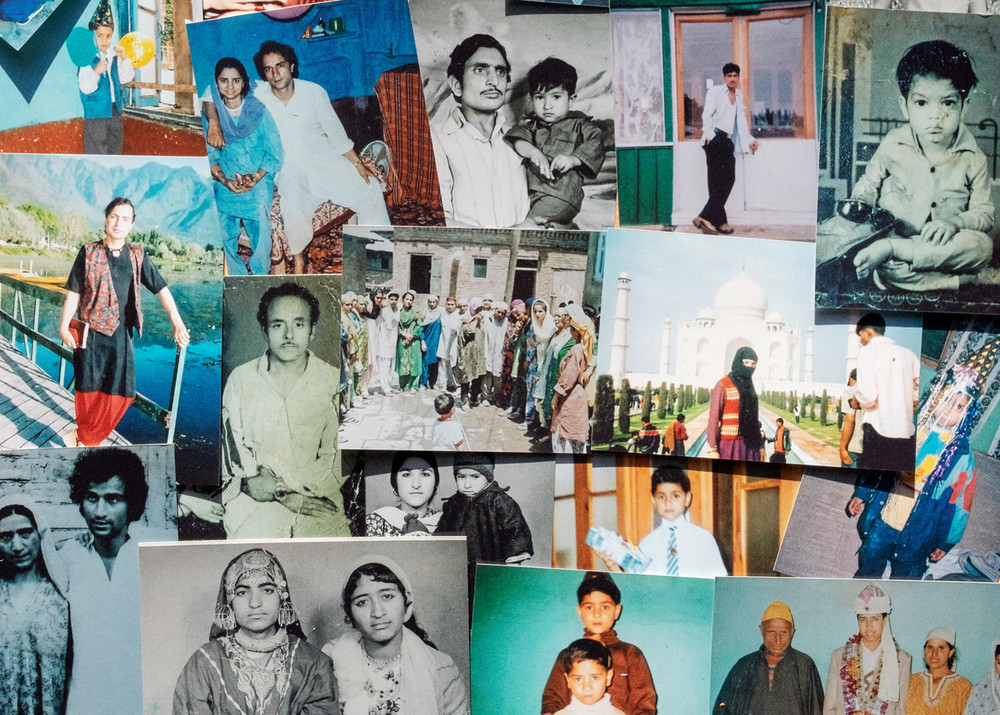 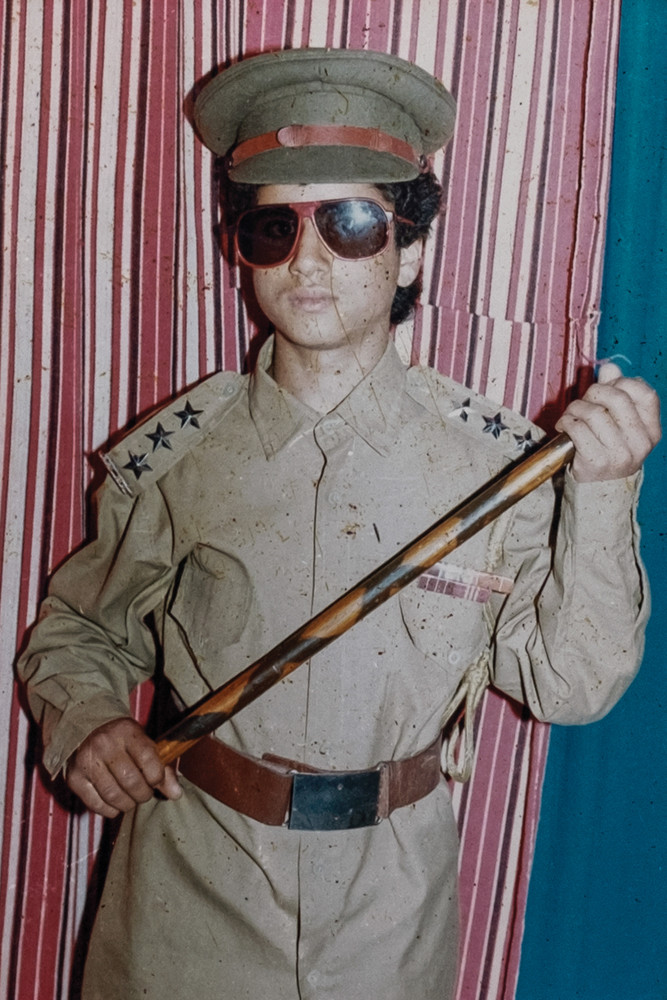 Z. family photo albums taken in a photo studio in Srinagar in the 90s.

Camillo Pasquarelli  1988, Italy
Rome – Genoa.
Camillo is interested in long-term projects adopting photography as a tool of knowledge contaminated by the self-reflective approach of anthropology.
In the last five years he has been working extensively in the valley of Kashmir, India, at first documenting the political conflict between the population and the Indian administration, and later trying to explore a more personal and oneiric approach to the issue.
He is one of the 20 artists selected for the FOAM Talent 2020. And in the same year he is among the four artists selected by CAMERA – Centro Italiano per la Fotografia for the European program Futures Photography.
His first photobook “Monsoons never cross the mountains” was published by Witty Books in December 2020.
His projects received several awards such as 1° Prize LensCulture B&W, Shortlist at PH Museum Grant, Best Rising Talent at Gomma Grant, Alexia Foundation Grant, Fotoleggendo Award, Shortlist Unseen Dummy Award.
His photographs have been exhibited in festivals and museums in Europe, US, Oceania and Asia.published on Time ,Der Spiegel , M Le Monde Magazine ,National Geographic , Financial Times , Internazionale , Polka ,BuzzFeed , Mashable ,Vanity Fair ,Sportweek , Politiken.