Since moving to Istanbul, Turkey, in 2015, I have been working on a photographic essay entitled ‘The New Sultan’ by traveling throughout the country, photographing many of the historic changes taking place there under the leadership of President Recep Tayyip Erdogan and his Justice and Development Party (AKP), inciting a wave of radical nationalism and promoting demonstrations of ultra-conservative Islamic religious beliefs in order to increase their political power.

Because of its central geographic location and its vital role in the ever-worsening global refugee crisis, Turkey’s political, social, and economic well-being are pivotal to the stability of the entire region. When viewed in its entirety, ‘The New Sultan’ is a photographic mosaic of events, that illustrate many of the key factors contributing to the current troubled climate of this country. These and other events I have witnessed in the past—and will witness in the future—make me keenly aware of the many opposing political, social, and economic conditions present in the country, which I feel need to be documented, examined and debated. 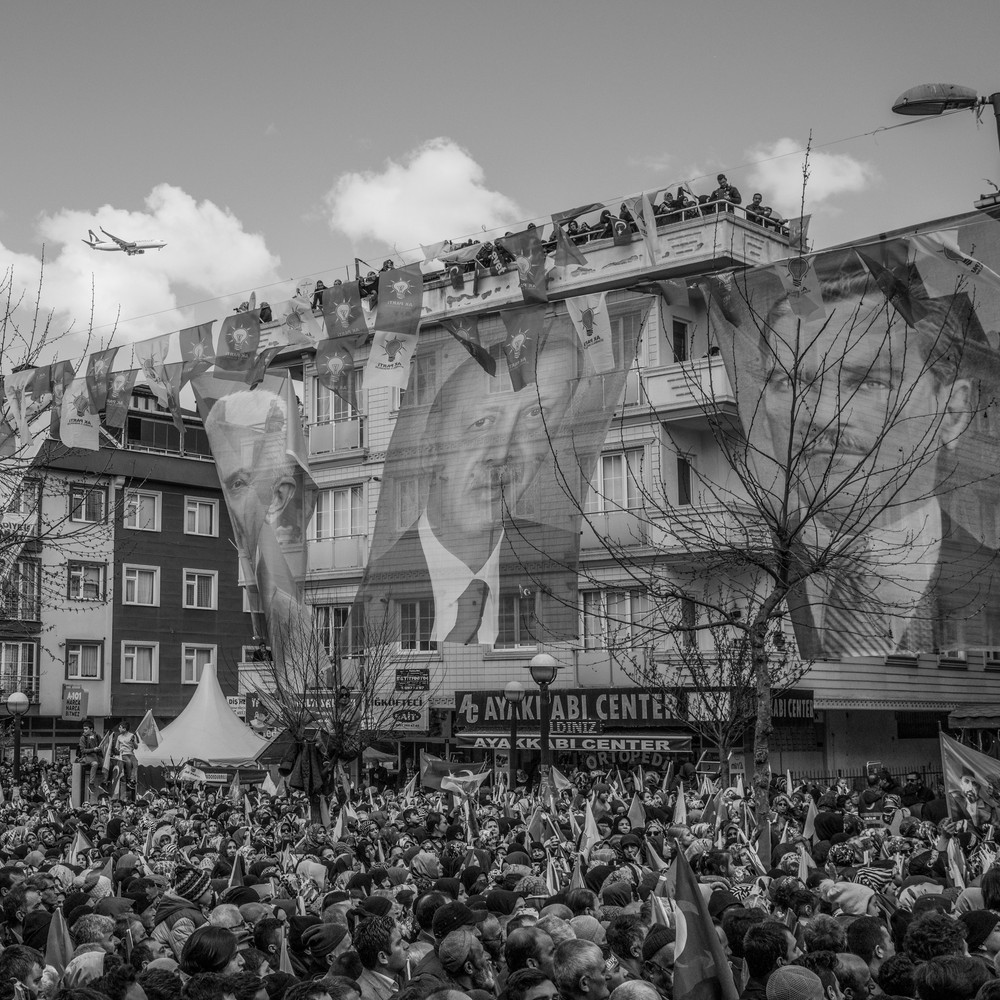 TURKEY. Istanbul, 29 March 2019 – Supporters of the AKP (Justice and Development Party) right before Erdogan’s speech during his rally campaign in support of his candidates for the municipal elections in Istanbul. 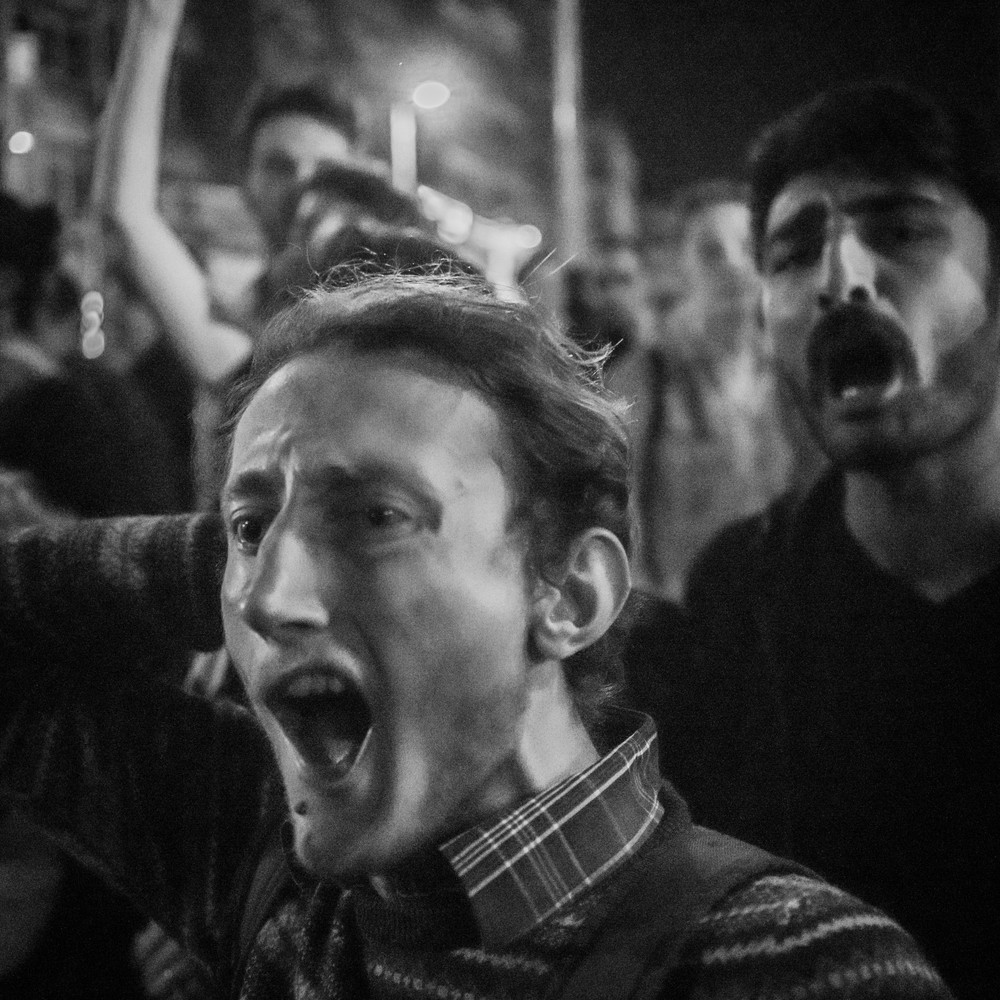 TURKEY. Istanbul, 07 May 2019 – Demonstrators in the Kadikoy District, Istanbul, during a protest against the High Election Board (YSK) decision to re-run the mayoral election, in Istanbul. The ordered to re-run the Istanbul’s mayoral election come after the party of President Recep Tayyip Erdogan complained about its shock defeat in the vote. 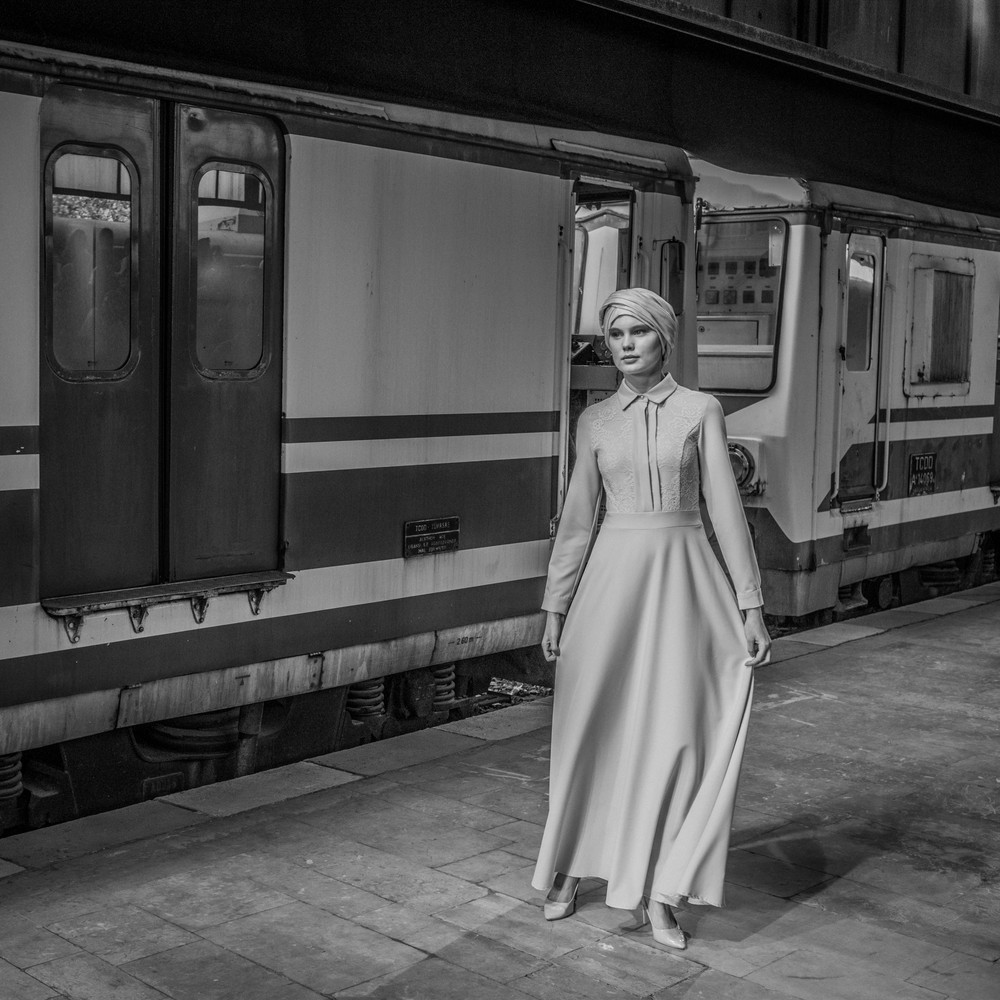 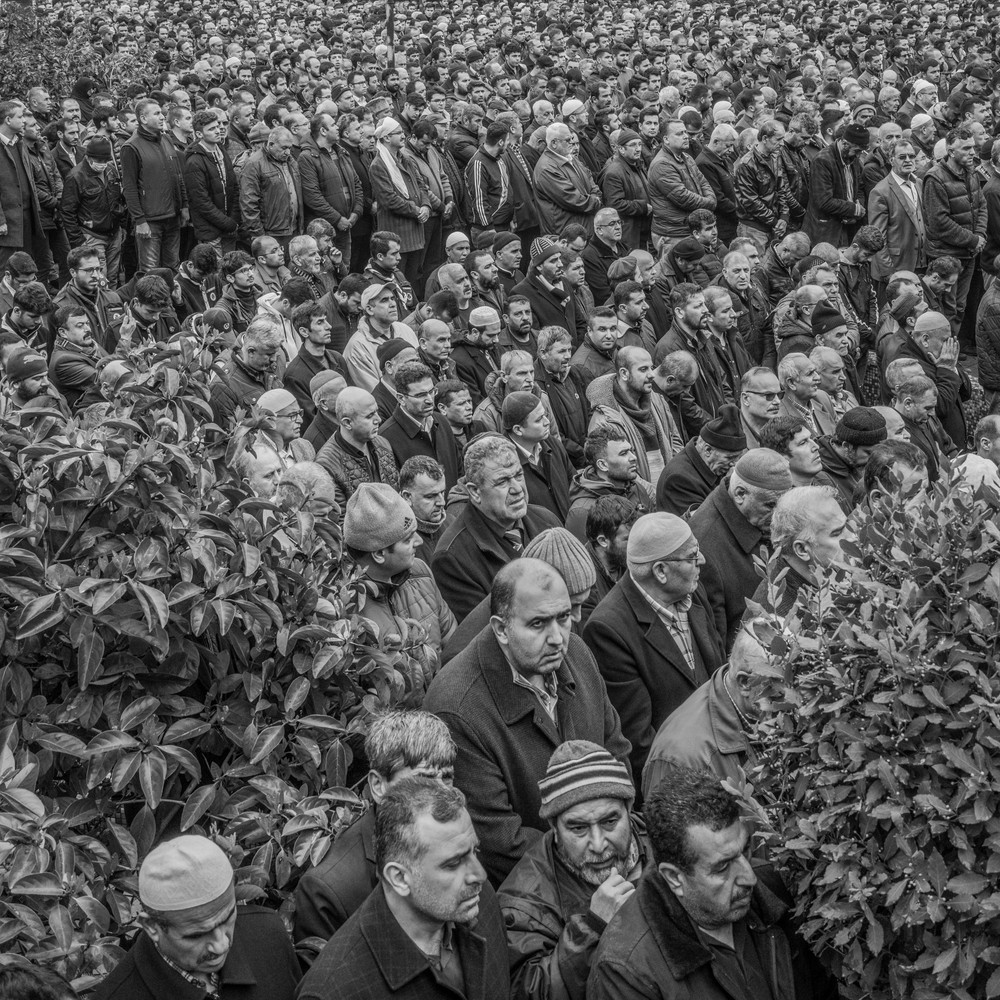 TURKEY. Hatay. February 2020 – People attend the funeral, at the cemetery mosque in Hatay, of Turkish soldier Mustafa Bayrakdar, who died in an airstrike in the Syrian town of Idlib that killed 33 soldiers. 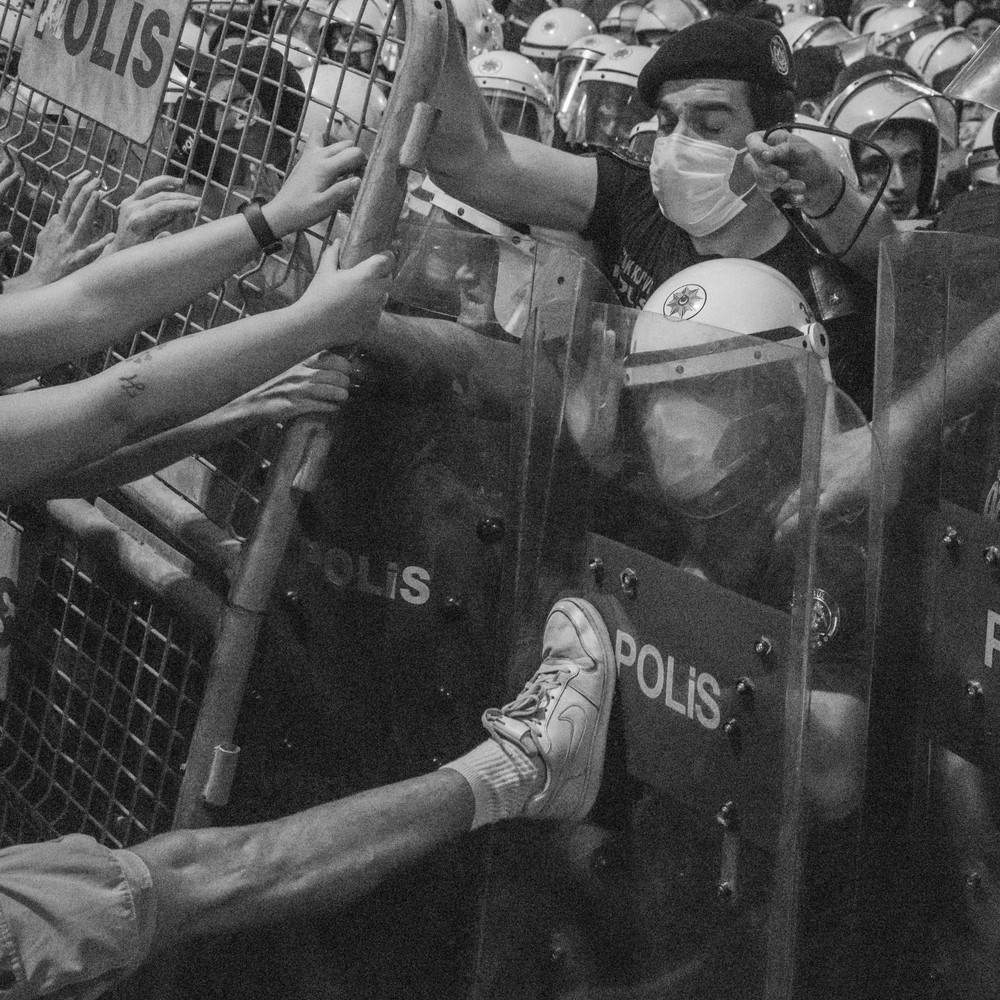 TURKEY. Istanbul. July 2021 – Turkish police clash with demonstrators as they protest against Turkey’s decision to withdraw from the Istanbul Convention, a human rights treaty aimed at preventing and combatting violence against women. 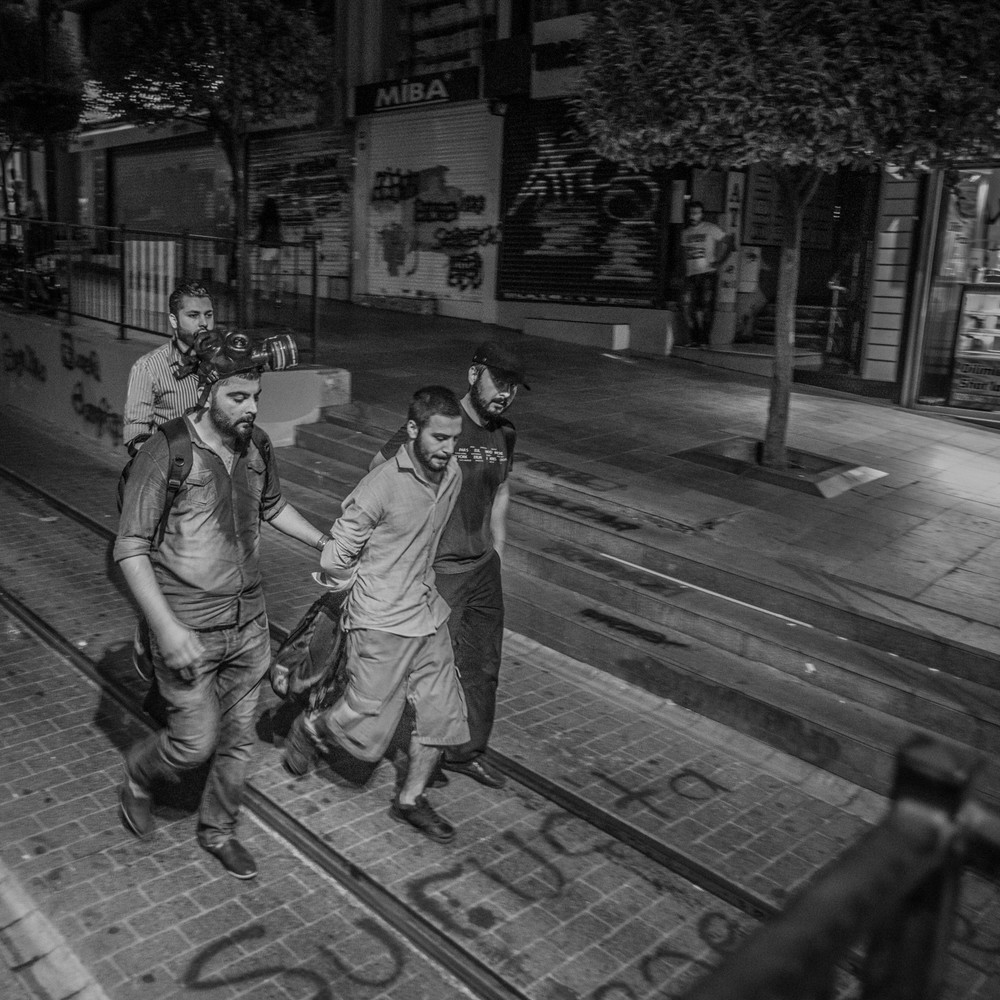 TURKEY. Istanbul, 21 July 2015 – A man is arrested in the Kadikoy District, Istanbul, during a protest again the Suruç suicide bomb attack, where 33 people were killed during a meeting of young activists discussing the reconstruction of the Kurdish neighboring Syrian town of Kobane. 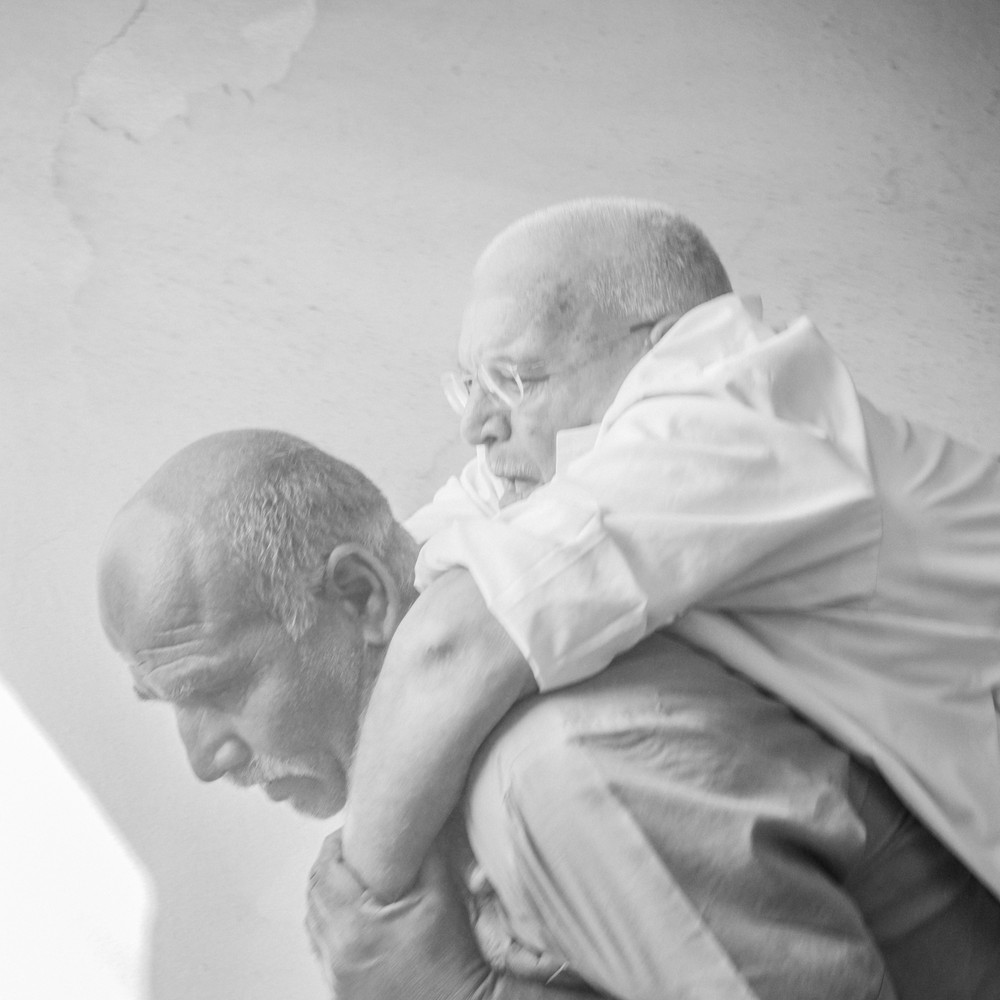 TURKEY. Akcakale, 13 October, 2019 – A man in Akcakale is evacuated from a building hit by a mortar reported to be fired from within Syria as a response to the ‘Operation Peace Spring,’ a military offensive launched by President Erdogan with the aim to create a 30-km “safe zone” in northeastern Syria. 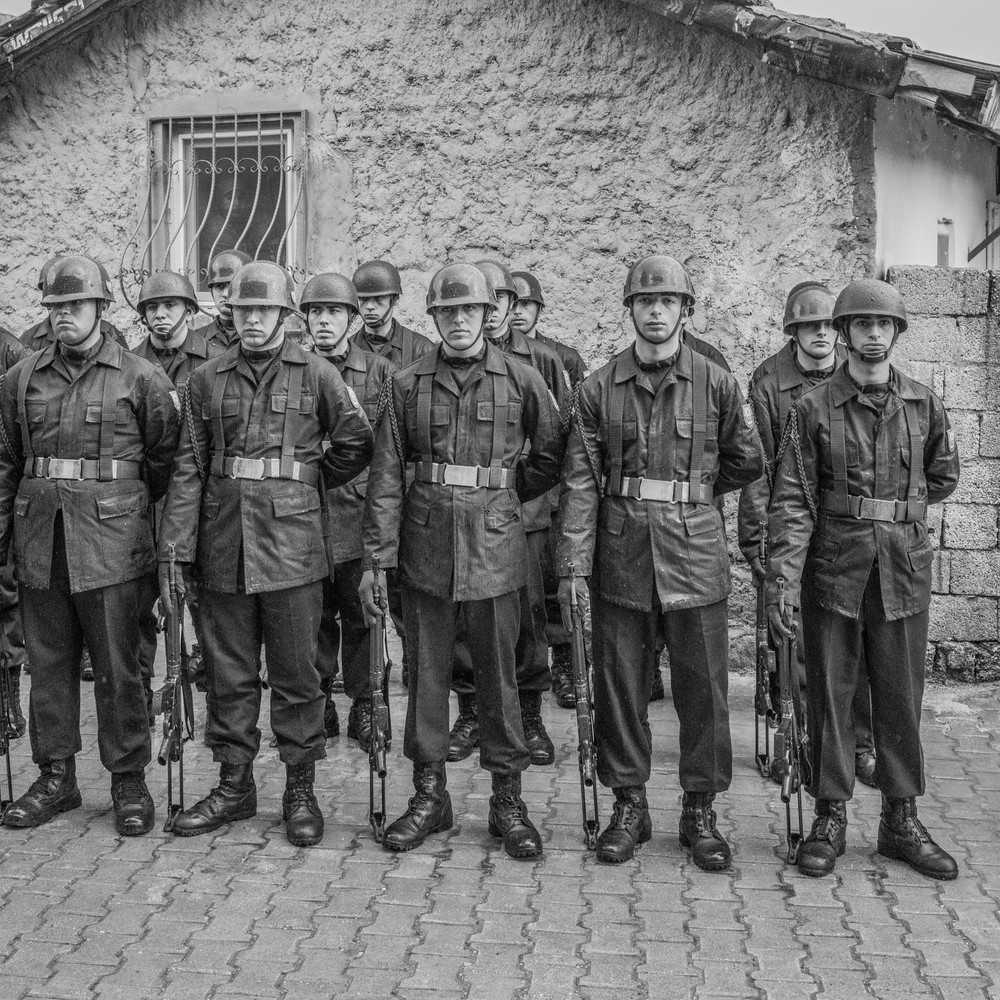 TURKEY. Hatay. February 2020 – Members of the Turkish Armed Forces (TSK) attend the funeral of Turkish soldier Emin Yildirim, in Akcurun village, Hatay, who died in an airstrike in the Syrian town of Idlib that killed 33 soldiers. 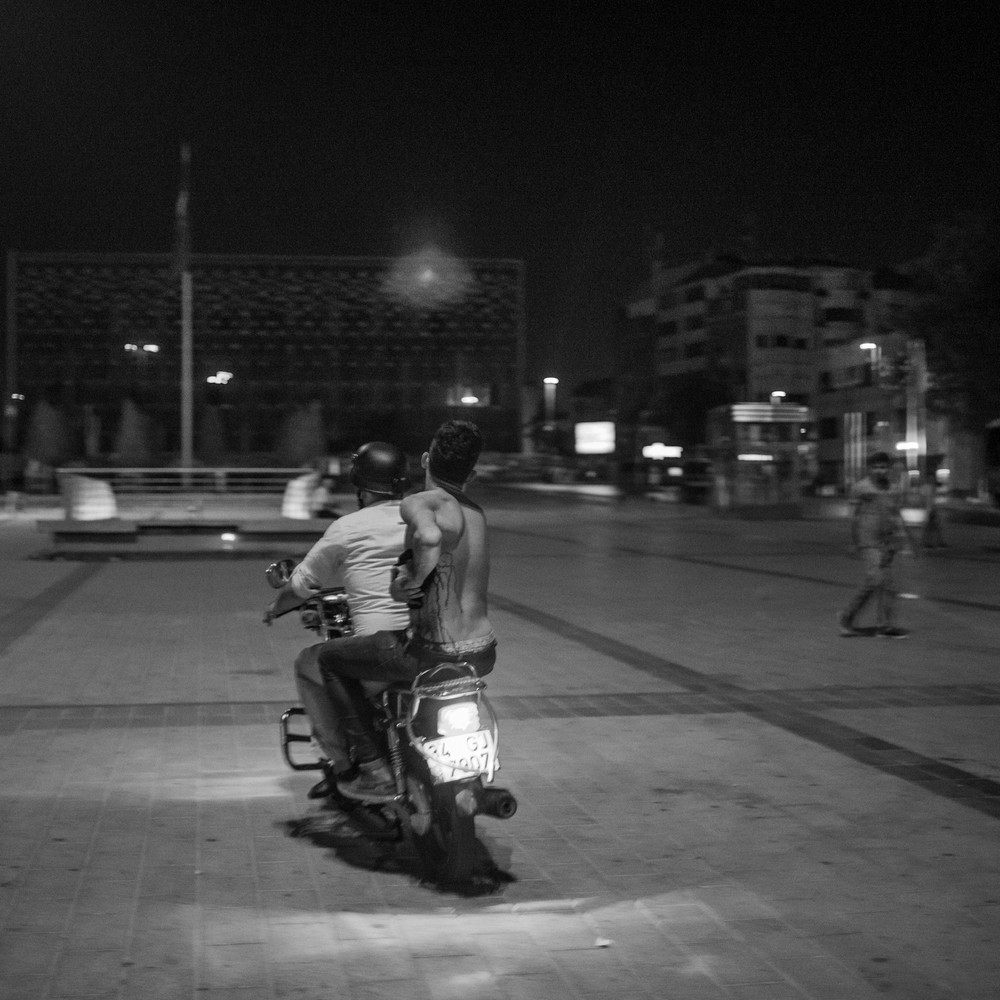 TURKEY. Istanbul, 16 July 2016 – A wounded man is rushed to a hospital during the failed July 2016 coup attempt. President Erdogan responded to the uprising by declaring a national state of emergency and by purging the government of any followers of cleric Fethullah Gulen, a longtime rival, who Erdogan blamed for the uprising. 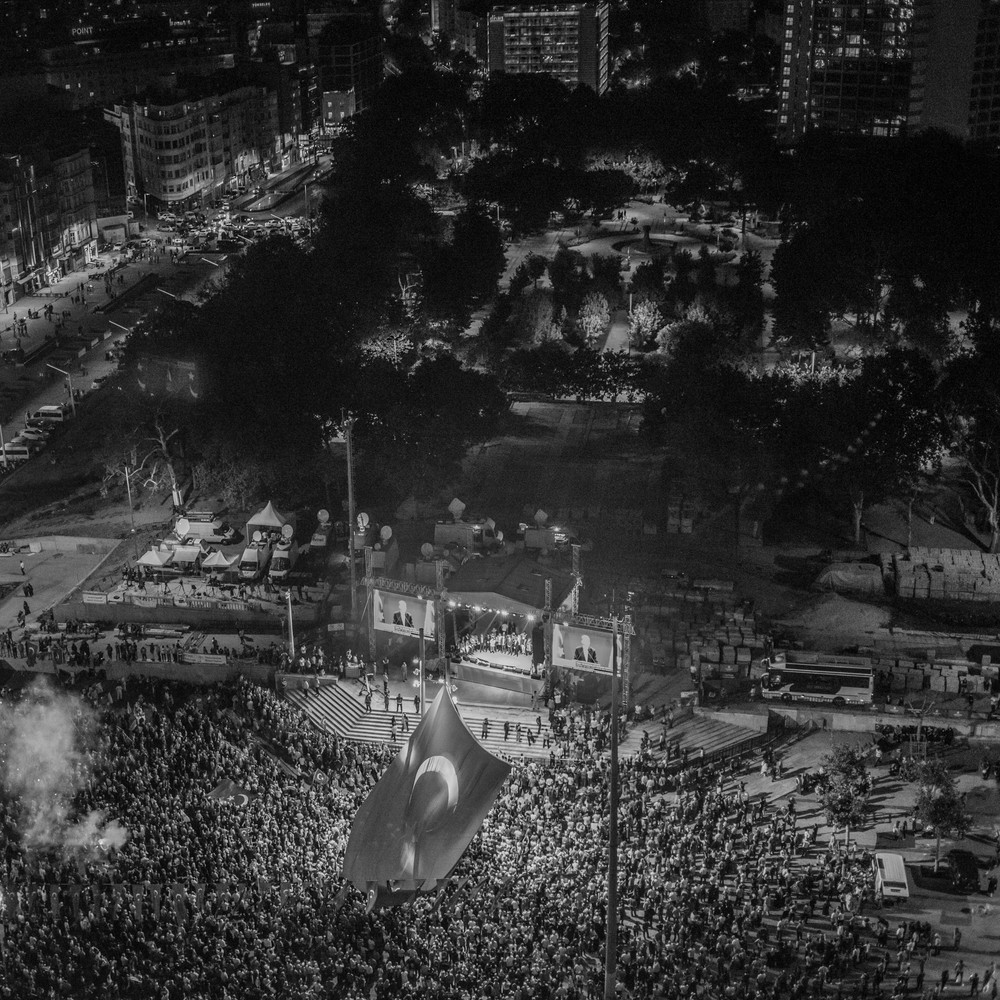 TURKEY. Istanbul, 20 July 2016 – After the coup attempt, a crowd gathers in Taksim Square to hear President Erdogan announce a temporary state of emergency, greatly expanding his government’s powers. This state of emergency would eventually last for a full two years. 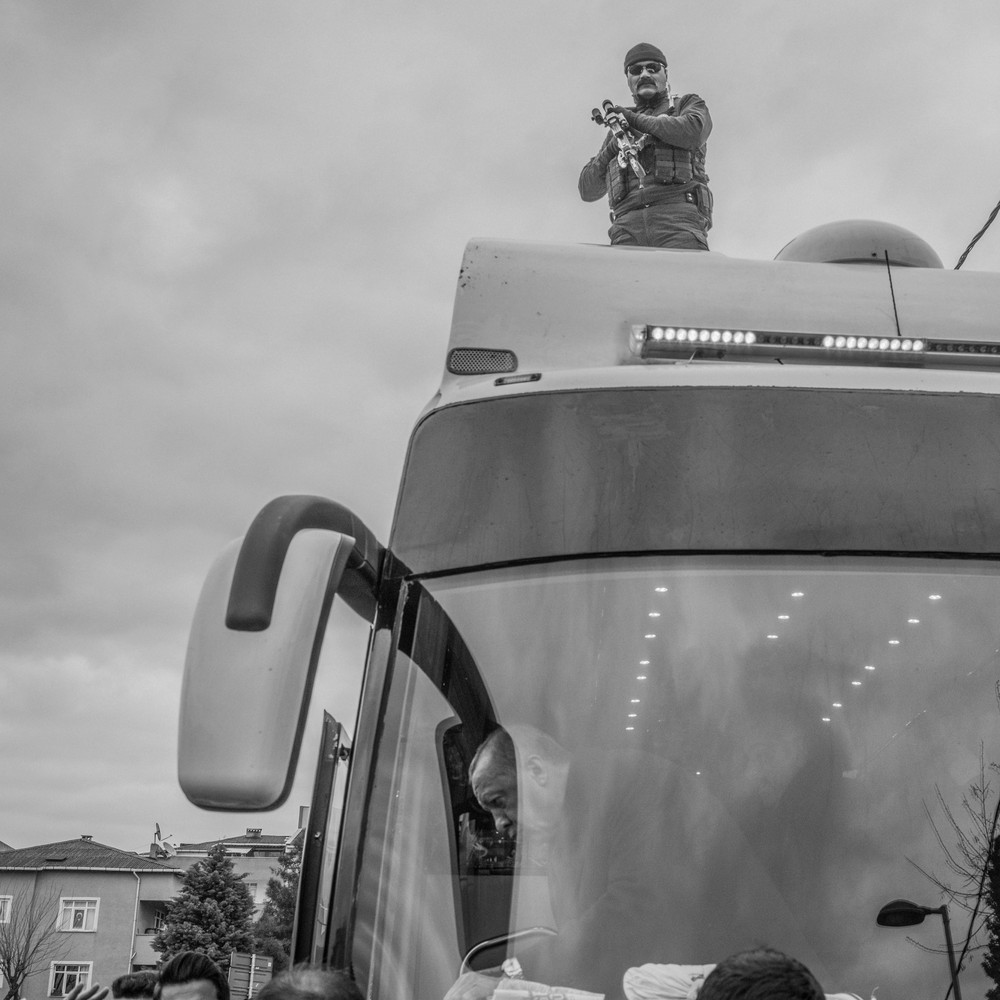 TURKEY. Istanbul, 29 March 2019 – A member of President Erdogan’s security force keeps watch from atop a bus where President Erdogan is getting off during his rally campaign in support of his candidates for the municipal elections in Pendik District, Istanbul. 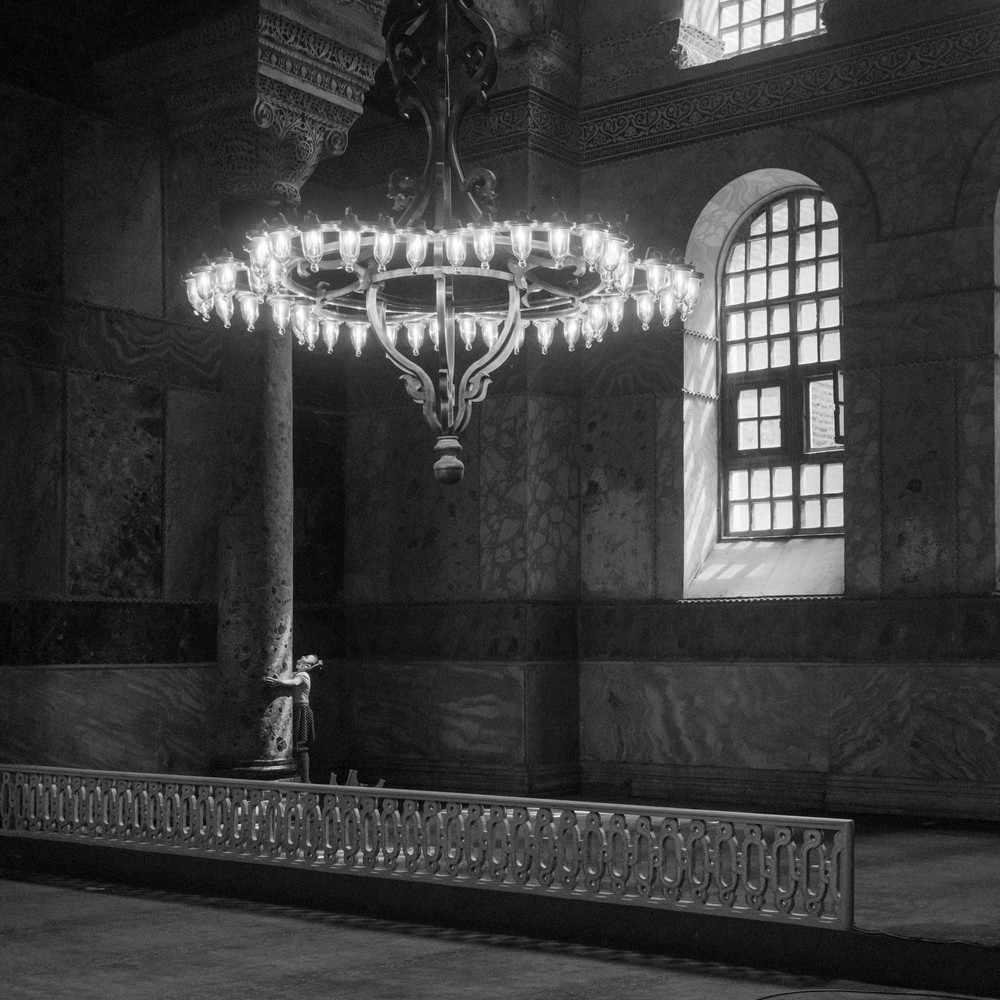 TURKEY. Istanbul, 25 June 2021 – A little girl hugs a column of the Holy Hagia Sophia Grand Mosque. In July 2020 the UNESCO World Heritage Site in Istanbul has been converted into a mosque under the pressure of President Erdogan. 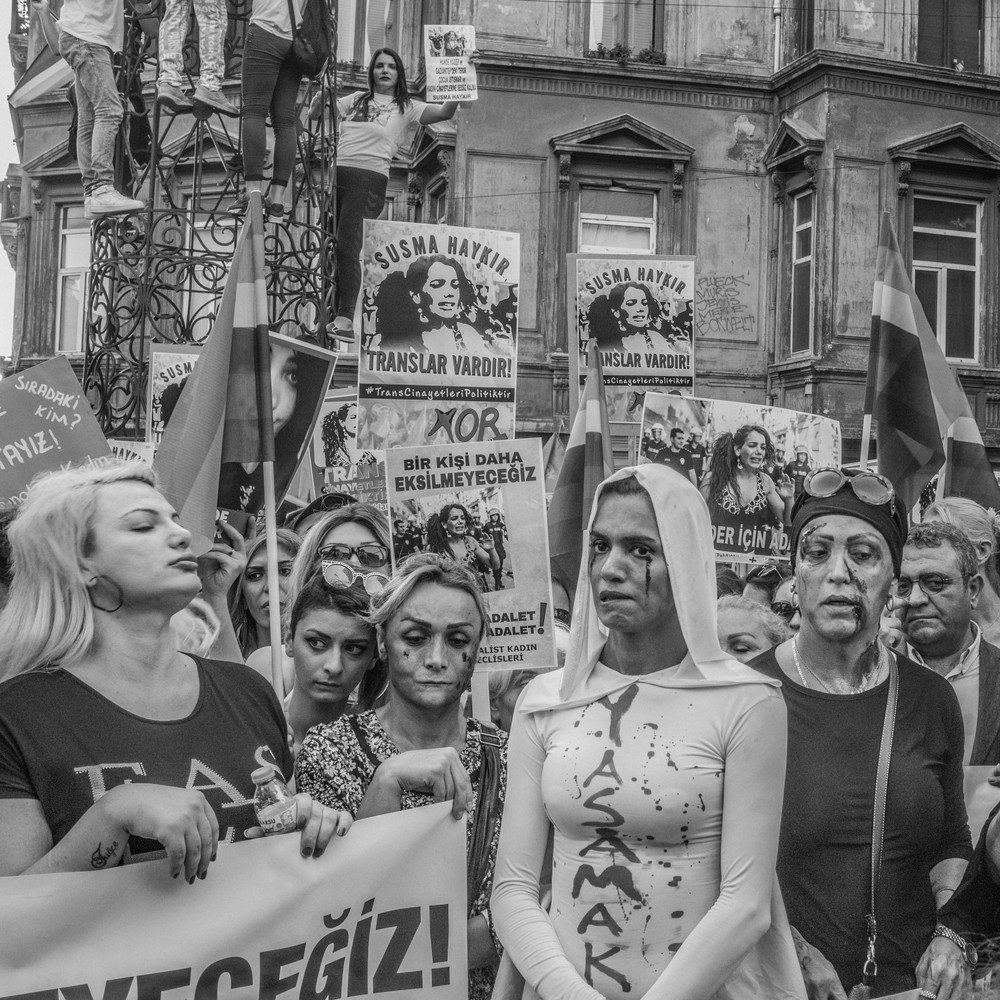 TURKEY. Istanbul, 21 August 2016 – Demonstrators protest the killing of a transgender sex worker in Istanbul, who was found mutilated and burned. Due to the country’s conservative attitudes and the government’s repressive policies, the LGBT community in Turkey often experiences discrimination, violence, and denial of their rights. 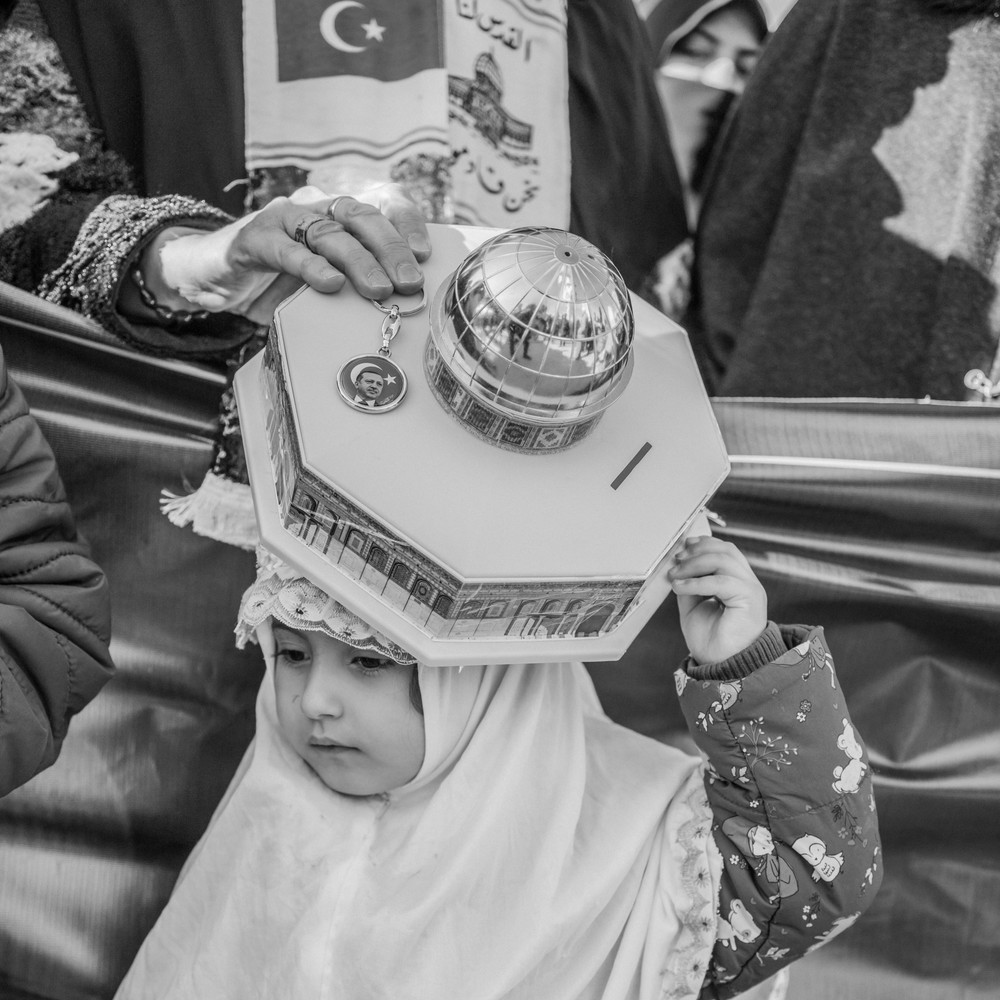 TURKEY. Istanbul, 31 January 2020 – A little girl takes part at a demonstration at Fatih Mosque, in Istanbul, organized to protest against the Middle East peace plan unveiled by the United States. 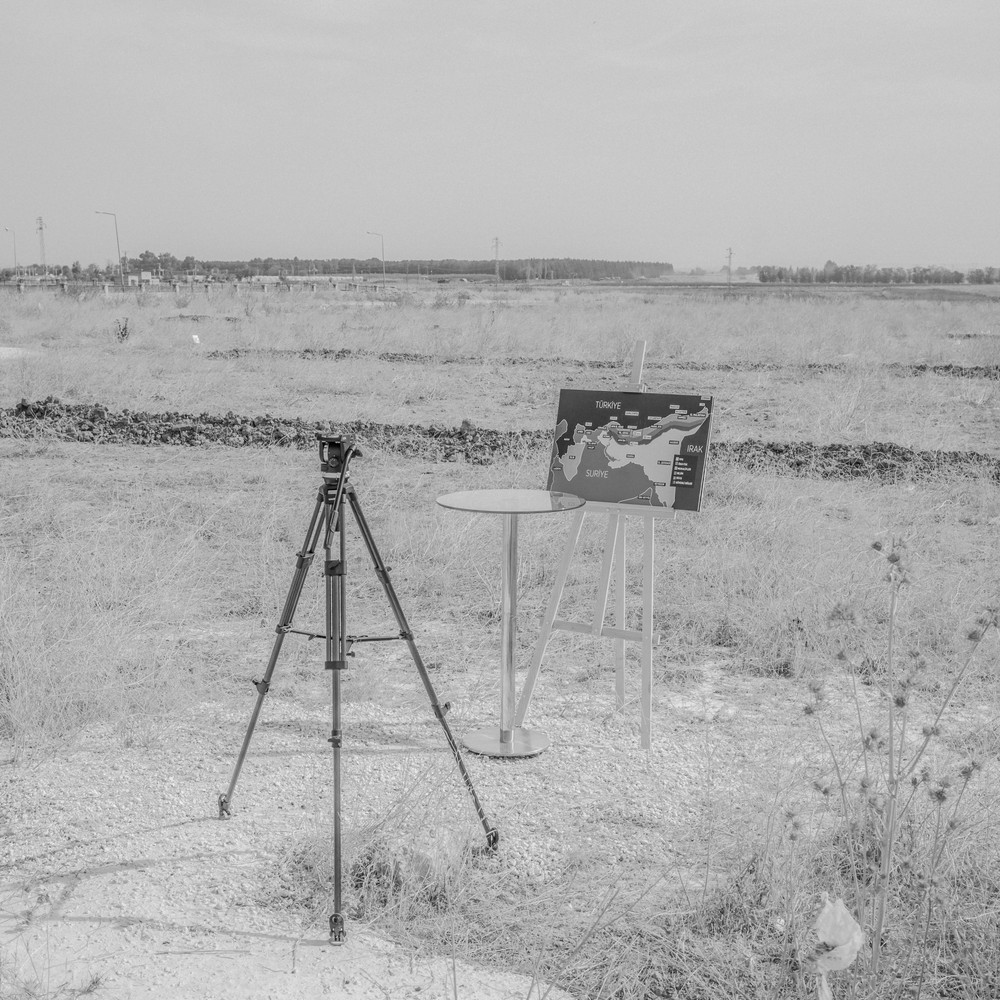 TURKEY. Akcakale, 11 October, 2019 – A map showing Turkey’s suggested operation in Syria, is displayed to be used for a TV broadcast by journalists in Akcakale. President Erdogan launched ‘Operation Peace Spring’ with the aim to create a 30-km “safe zone” in northeastern Syria. 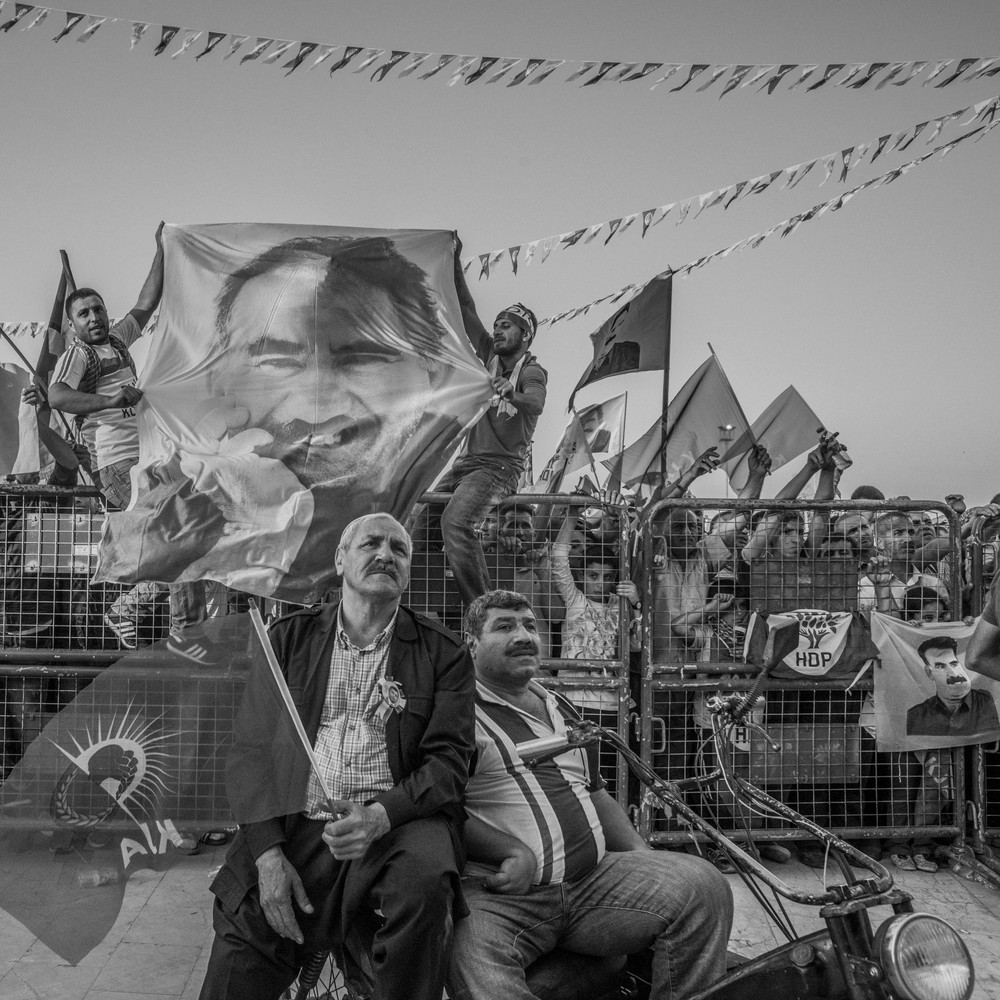 TURKEY. Diyarbakir, June 2015 – Supporters of the pro-Kurdish Peoples’ Democratic Party celebrate during the day after the election. Their party’s success in the parliamentary elections denied the AKP the majority they needed to call a referendum to convert Turkey to a presidential system. After the result of the election Erdogan called off the ceasefire with the Kurdistan Workers’ Party (PKK). 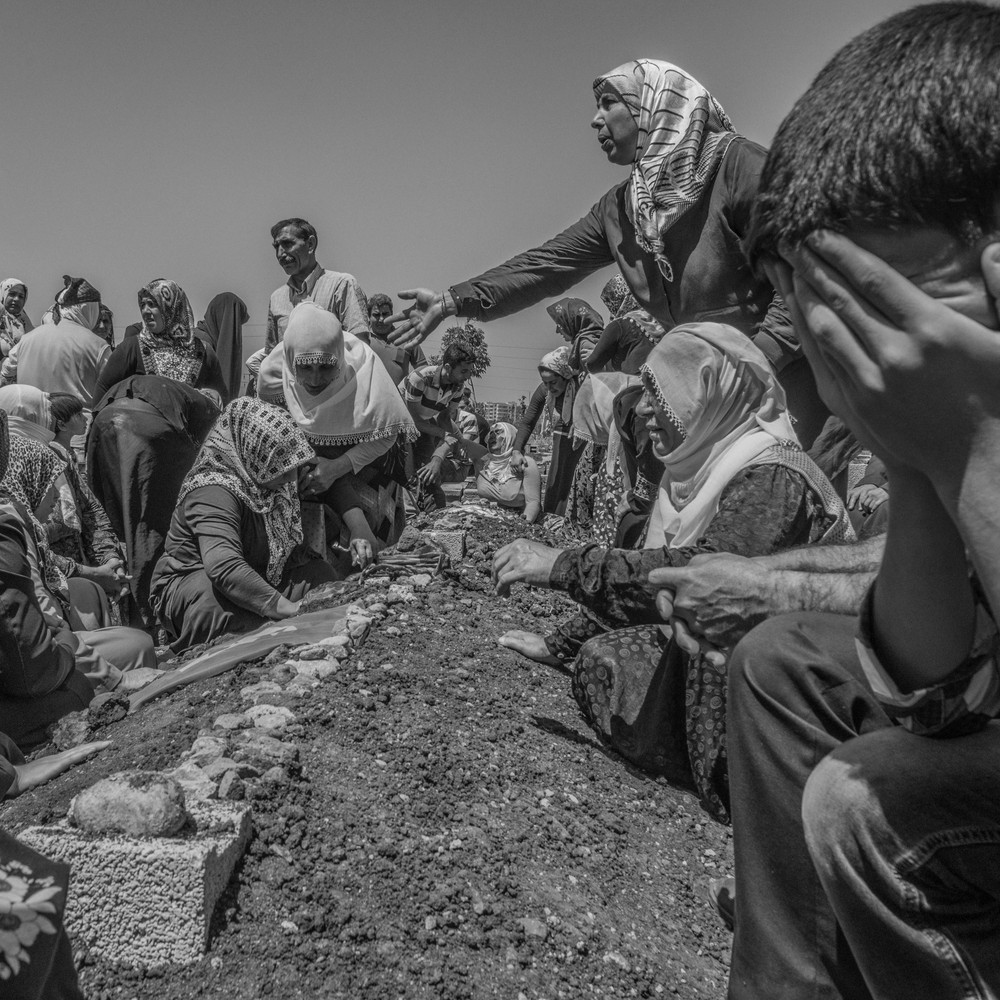 TURKEY. Diyarbakir, 10 June 2015 – Family and friends attend the funerals of pro-Kurdish Peoples’ Democratic Party (HDP) who died during post-election clashes with President Erdogan’s government supporters after the Kurds successfully denied the AKP the majority they needed to convert Turkey’s government to a presidential system, prompting Erdogan to call off the ceasefire with the Kurdish PPK.

TURKEY. Akcakale, 24 September 2015 – A view of the Akcakale refugee camp, southeastern Turkey. Of the 3.5 million Syrian refugees in Turkey, 30% live in 22 government-run camps. 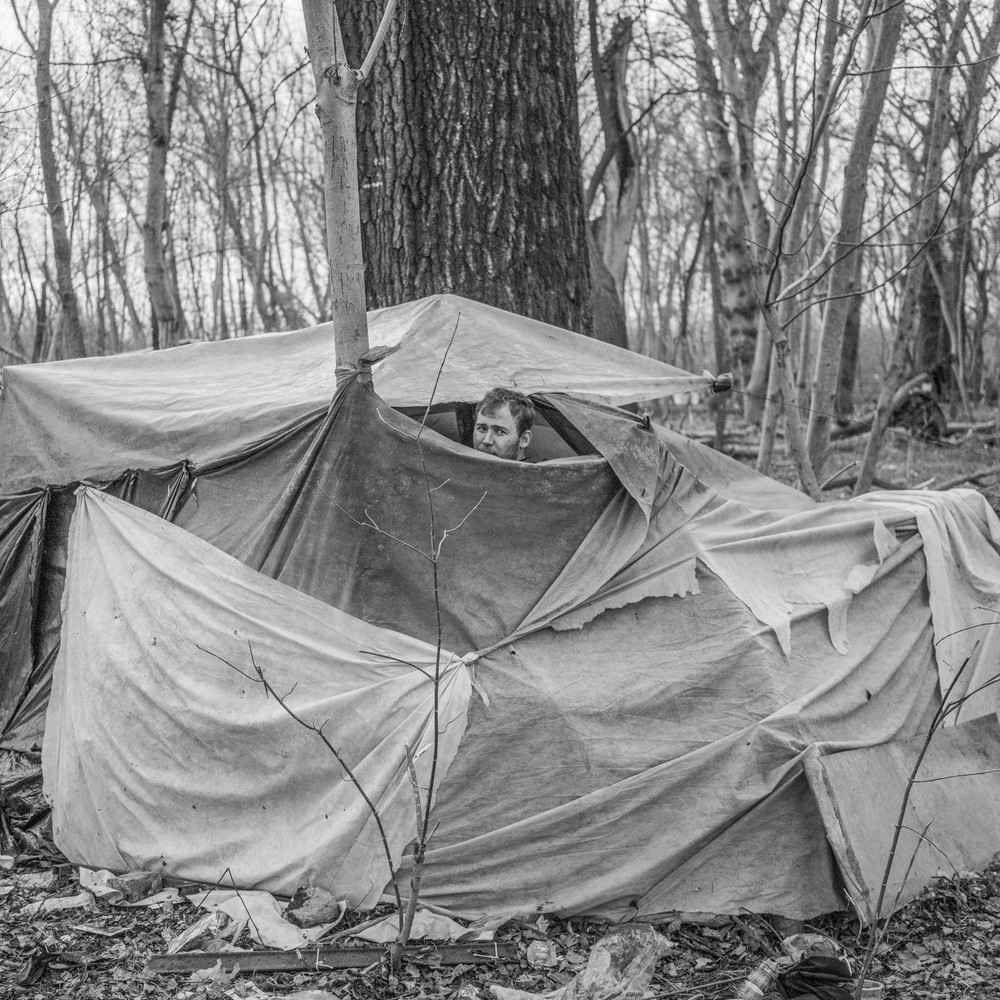 TURKEY. Edirne. March 2020 – A refugee stands inside a makeshift tent at the Pazarkule crossing gate. Thousands of refugees arrived after been encouraged by Turkey to leave for the European Union. 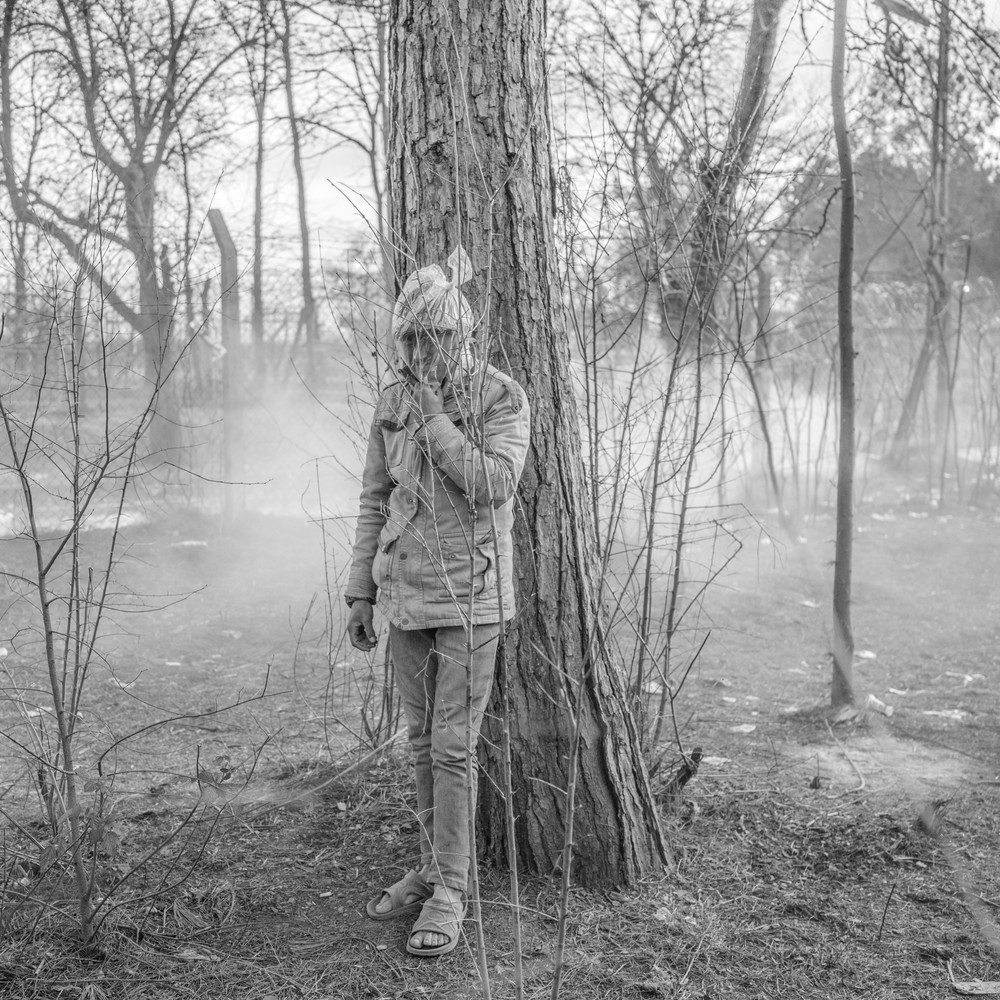 TURKEY. Edirne. March 2020 – Refuge covers his face with a plastic bag to protect from tear gas during clashes with Greek border police near the Pazarkule crossing gate. Thousands of refugees arrived after been encouraged by Turkey to leave for the European Union.

Born 1979 in Fabriano, Italy, Emanuele Satolli has specialized in photojournalism after obtaining his Masters in Journalism from the University of Turin. A frequent contributor to TIME Magazine he works extensively in the Middle East where he has photographed such pivotal events as the battle to free the Iraqi city of Mosul from ISIS and the fall of the Islamic State in the Syrian stronghold of Raqqa. In 2018, Satolli documented the protests in Gaza as the US moved its embassy from Tel Aviv to Jerusalem.
His base in Istanbul provides him with ready access to the Middle East and a view of the social, economic, and political tensions in Turkey. Currently, he is documenting these tensions, which extend from radical politics to revolutionary turmoil to the attempted integration of Syrian refugees living throughout the country.
His work has been published in the main magazine worldwide and exhibited in many galleries.