Cracolândia, is the name of a single block of buildings in the center of São Paulo, Brazil. The area is host to some 1,600 people a day, who either live on the streets or come in to buy and consume crack cocaine, day and night. This land is a limbo, a sort of community, with its peculiarities and rules: whoever gets lost in the streets of Cracolândia chooses to live in a kind of total freedom outside of society; but for those who let themselves be dominated by their addiction the price to pay is often very hight. For decades, the neighborhood has been a challenge for the city government. From 2014 to 2017, the project “Open Arms” offered addicted drug users alternatives including housing, food and employment. But after 2017, a change in the city’s administration from a left-leaning to more right-wing government saw the strategy shift to coercing drug users in rehab clinics, as well as massive police operations that rounded up addicted drug users.

On one side this war on drugs and addiction has been used as a justification for gentrification: demolishing old houses and building new ones, which hands profits to construction companies and often displaces locals as middle and upper class residents move in. On the other, the void left by the state was filled by the presence of organizations mostly linked to evangelical churches: today in Cracolândia the only way to break free from crack is to embrace God. Documenting this land for three years, I got to know many drugs users and I found that the factors that result in their ending up on the streets go beyond their crack consumption: inequality, unemployment and a lack of supportive public policies. Most of the people who frequent this area are black or brown, and many have spent time in prison: up to a certain point and not for everyone, being part of Cracolândia is a choice. In today’s Brazil, which every day becomes poorer and more uneven, crack is not the root of evil, but the symptom of a sick society. 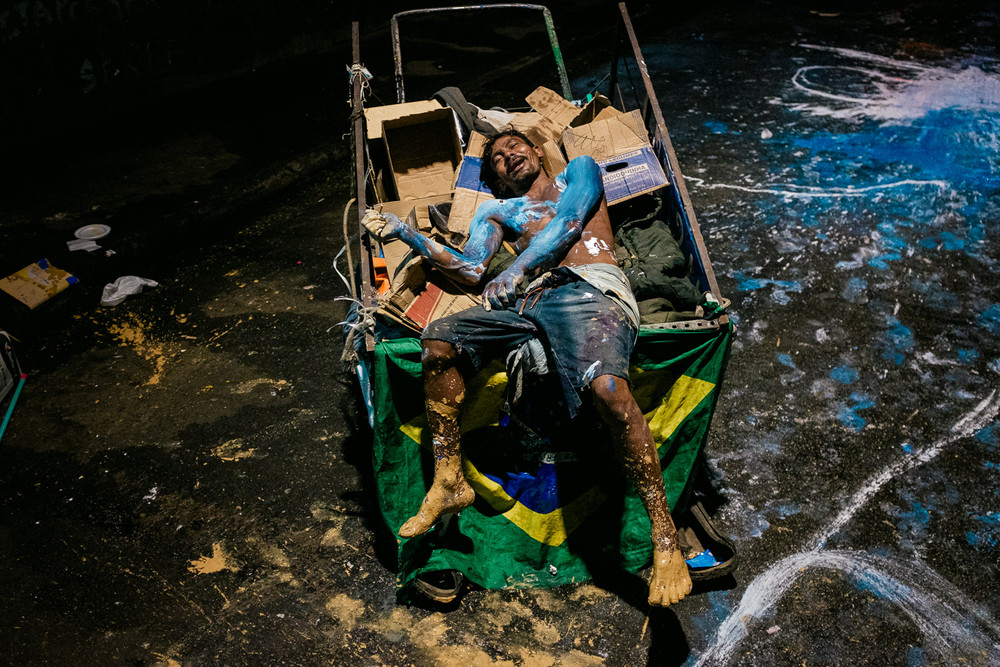 Índio Badaross
Índio Badaross, who lives in the streets of Cracolândia, develops paintings and performances using paint and supports found on the street while practicing his profession as a recyclable material collector. He is a member of the collective Biricoarte, a group of artists united to strengthen projects in this stigmatized territory.

Jhonatan and his cachimbo
Jhonatan smokes a crack rock in a “cachimbo”, a handmade aluminum pipe, in the region known as Cracolândia. The crack is a substance obtained by mixing cocaine-based paste with sodium bicarbonate and water. The result is a small rock that is smoked. The effects are 6 times stronger than cocaine and do not last longer than 5 to 7 minutes. 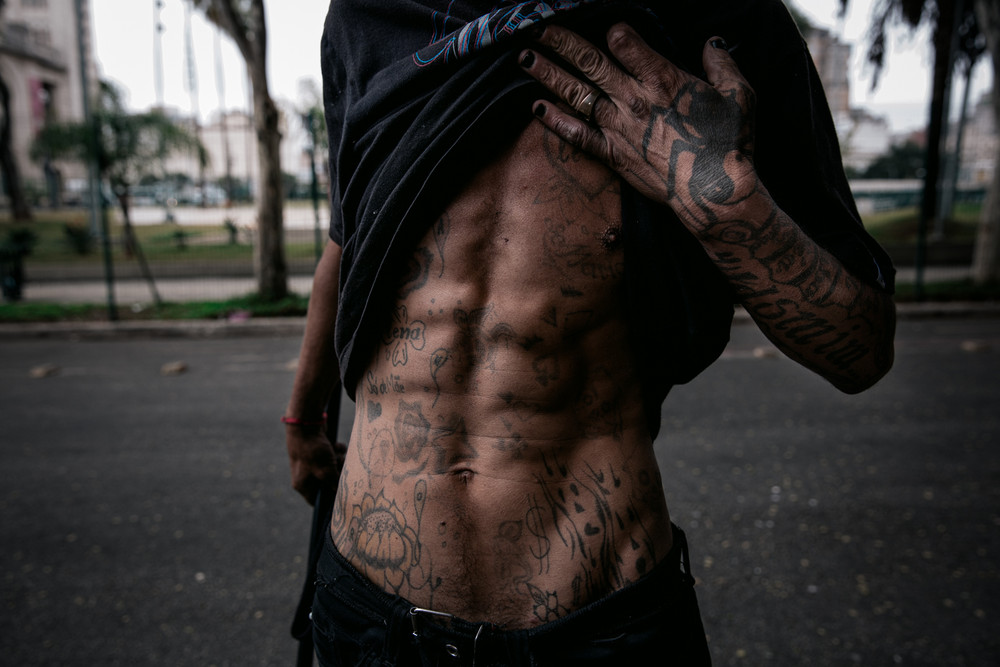 Fábio
Fábio, who has been coming to Cracolândia’ for many years, proudly displays his tattoos. During the day, he washes car windshields at traffic lights. 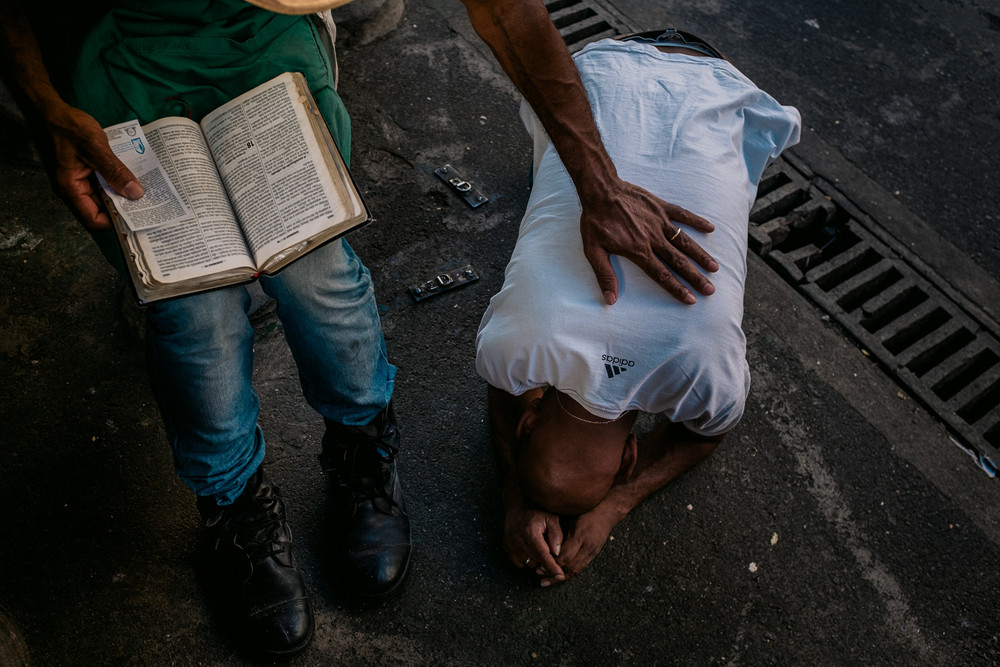 The bread shepherd
José Carlos, also known as the “bread shepherd”, is one of the most emblematic figures of the region. Five years ago, he began to attend the flow of drug addicts handing out bread, juice and words of comfort. He does this every morning, while at night he works as a street sweeper to support his family who live in the suburbs. 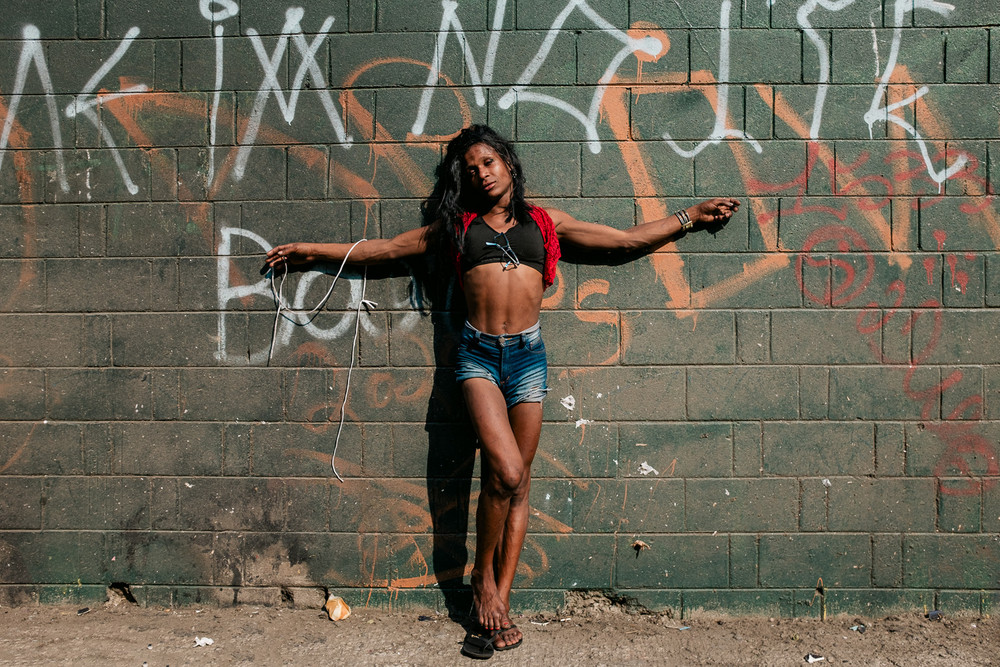 Aika
Aika is a transsexual from the eastern state of Bahia and moved to São Paulo some years ago in search of a better life, but she started smoking crack and has lived on the streets of Cracolândia ever since. Brazil is the country with the highest number of lethal crimes against LGBT people in the world. 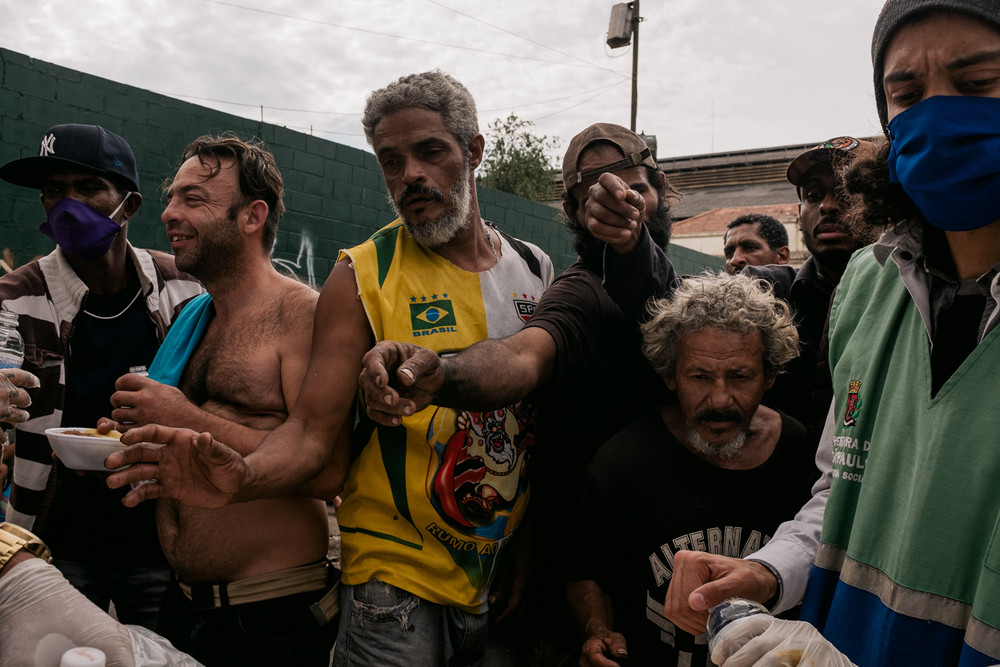 In God’s name
Every day, the fluxo-goers (fluxo is called the open-air crack market) stand in line and thank God before receiving the meal. Most of the organizations that work in the area are linked to evangelical churches. 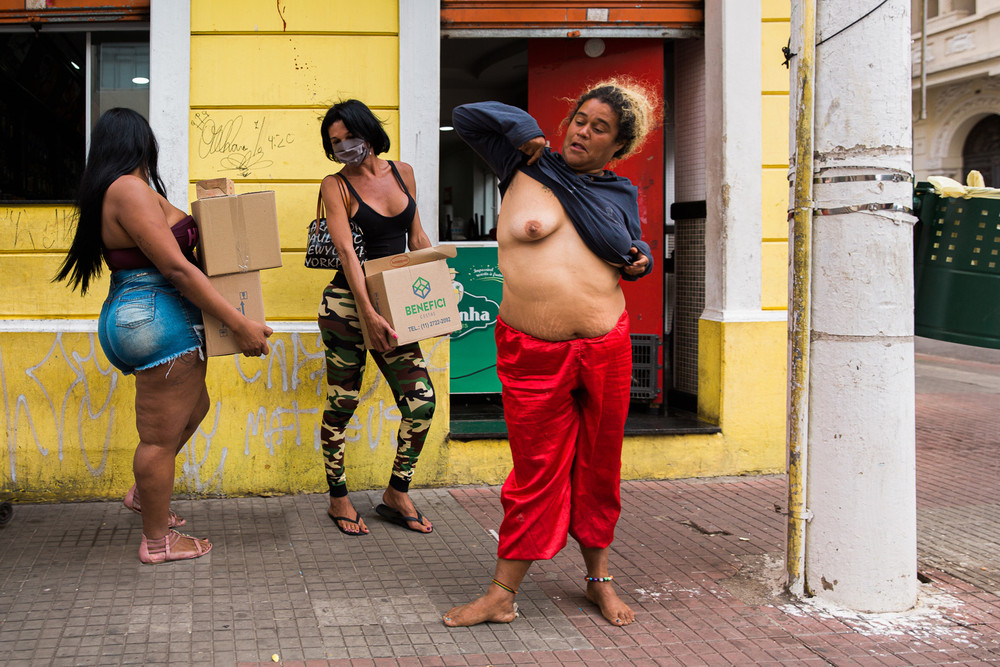 Boca do lixo
Two transsexuals have just received a basic basket as a donation. Cracolândia is an open-air theater. Certain street scenes take you back to when the area became known as “Boca do Lixo” ( Trash Mouth) and several films were produced. The cinematographic genre of “pornochanchada”, a popular comedy combined with a good dose of eroticism, was born in the early 1970s in this region. 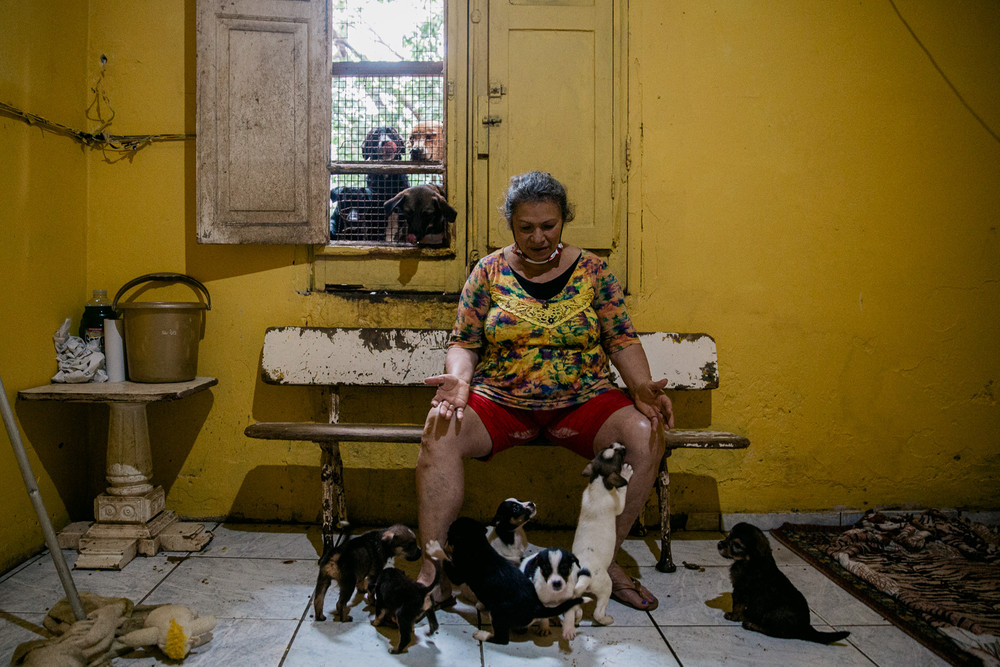 Dona Graça
For more than 20 years, Dona Graça has managed Pensão Dino Bueno, located right in the heart of Cracolândia. With a few rented rooms, the hostel also serves as a refuge for abandoned animals in the neighborhood. Currently, about forty dogs, twenty cats and a duck live together there, spread among the different floors of the building. 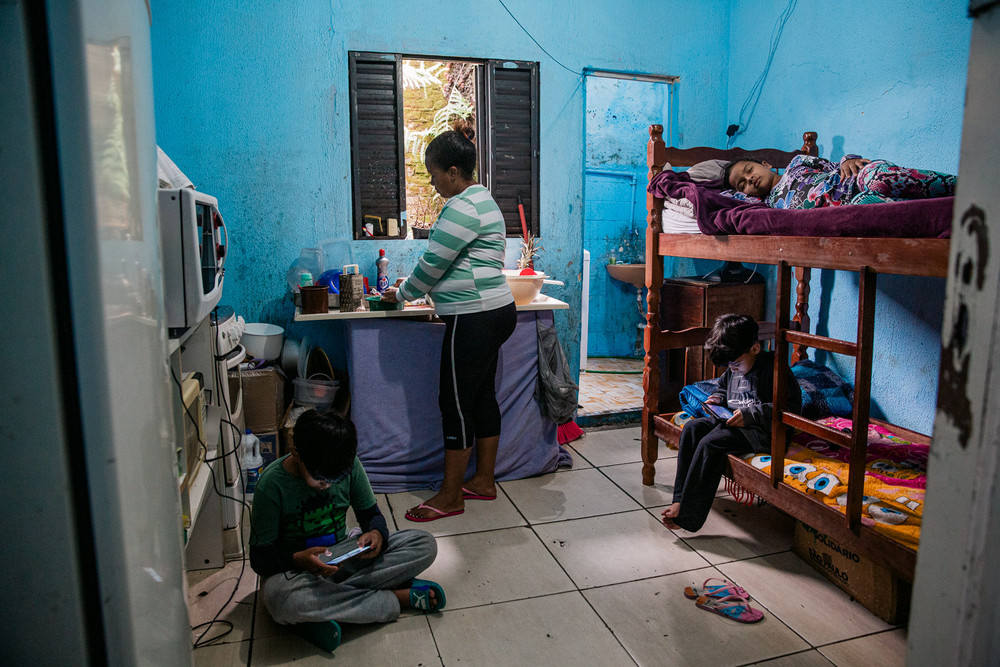 Mara
Mara lives in a tenement in the neighborhood with her three children. As two of her three children suffer from cognitive disabilities, Mara was given an apartment in a suburban neighborhood by social services. This apartment would be bigger and cheaper, but Mara doesn’t want to leave Cracolândia because over the years she has built strong bonds and relationships in this community. 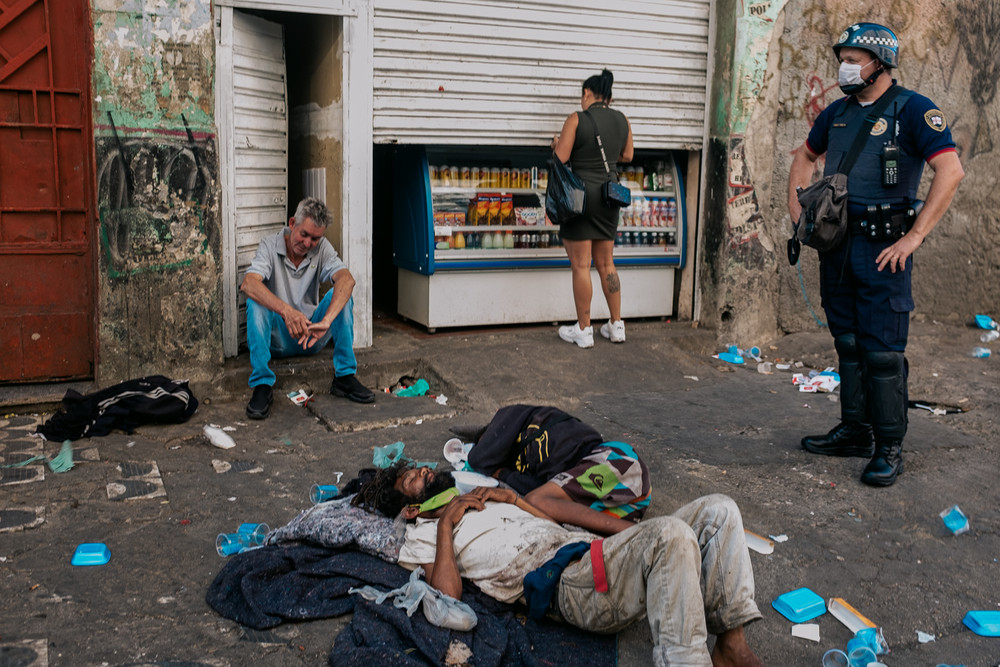 A complex microworld
A sidewalk in the heart of the neighborhood. This context is a microworld much more complex of what is usually described on the surface. In addition to drug dealers and Crack users and police officers patrolling the area, many families live in dilapidated buildings on the block and there is no shortage of commercial activities. 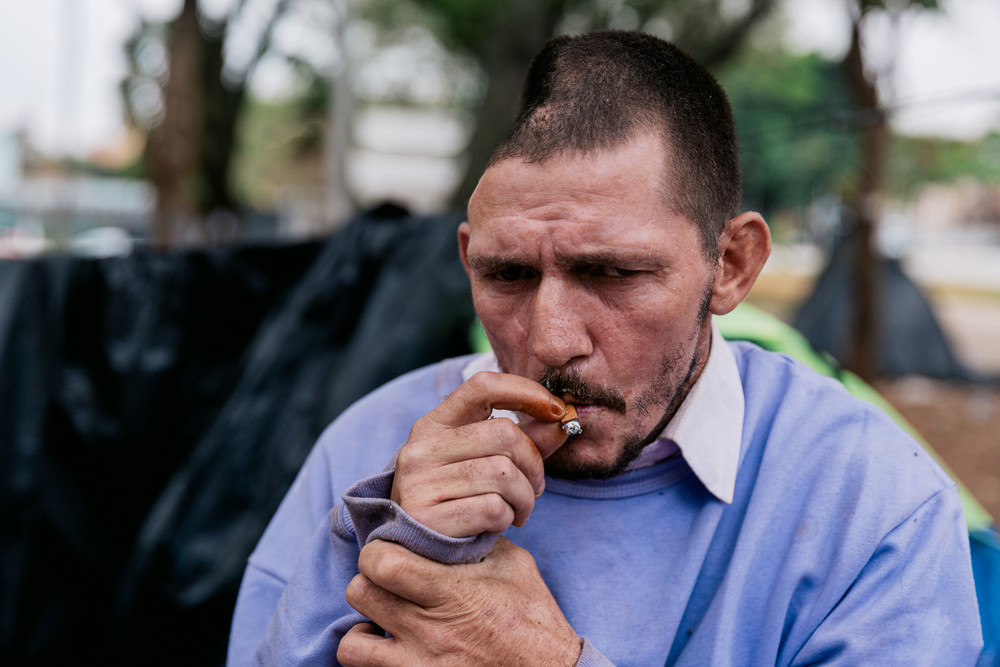 The metralha brother
Edson claims to be the last survivor of a group of thieves called “Metralha Brothers”. During a shootout with the police, he lost a cerebral hemisphere while his two brothers died. Today he lives in a tent in the Princesa Isabel Square, a few blocks from Cracolândia. 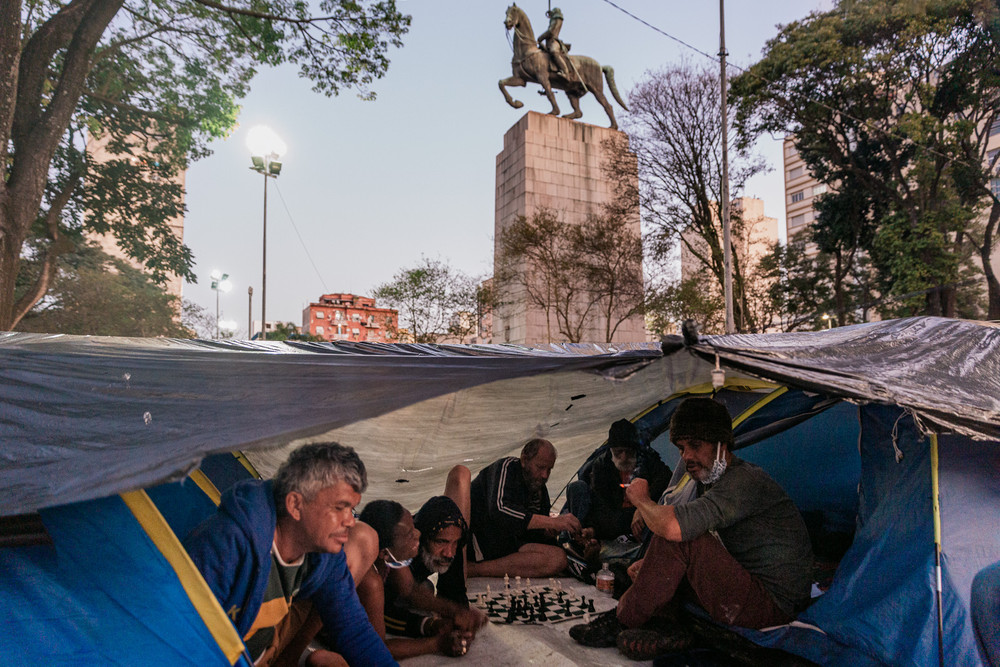 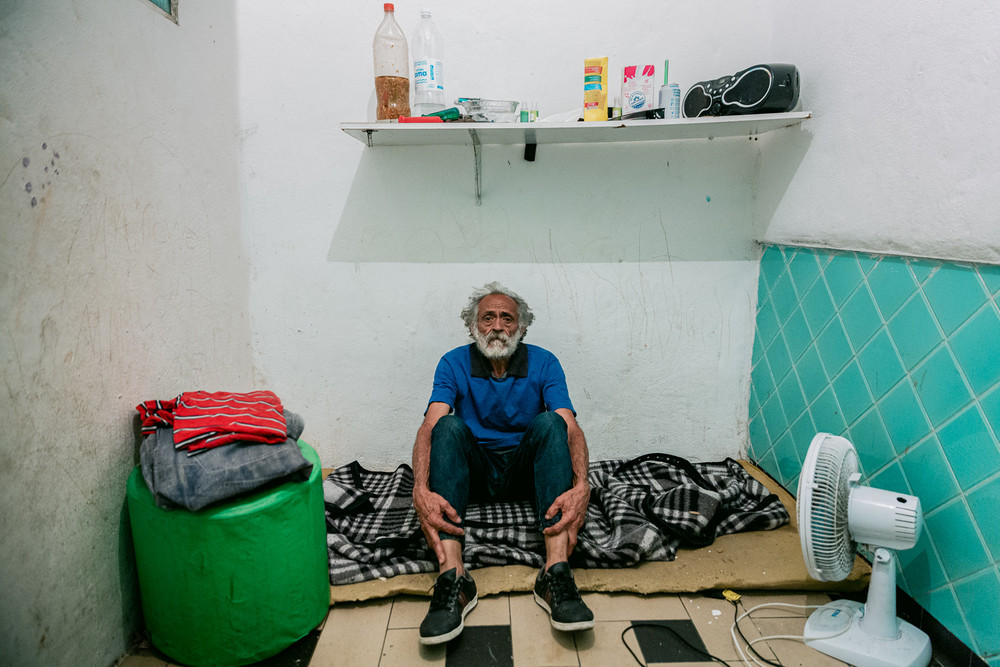 Abinel
Abinel is 65 years old. He was a transporter, but due to an accident he had to stop working. He has no family and with the money from the disability pension, the maximum what he can afford is a humble room in a boarding house in the heart of the neighborhood. 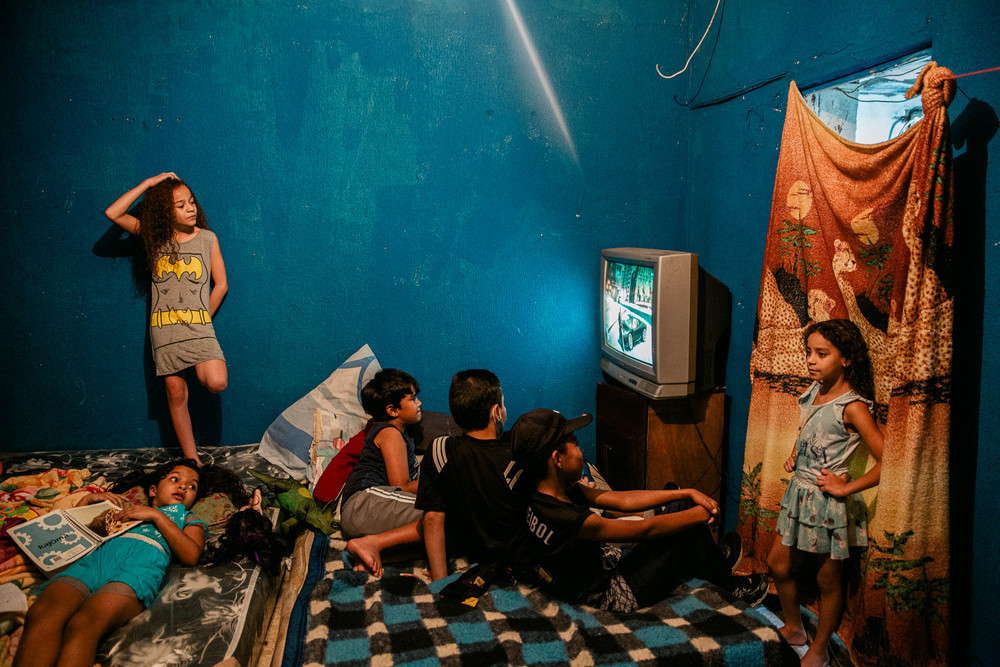 The Cortiços
The Cortiços: most of the tenement housing areas in the neighborhood consist of a single bedroom and a small bathroom. Children play in the corridors and gather in the rooms where large families sleep together. Although the structures of these buildings are very degraded, there is a spirit of solidarity and a sense of community. 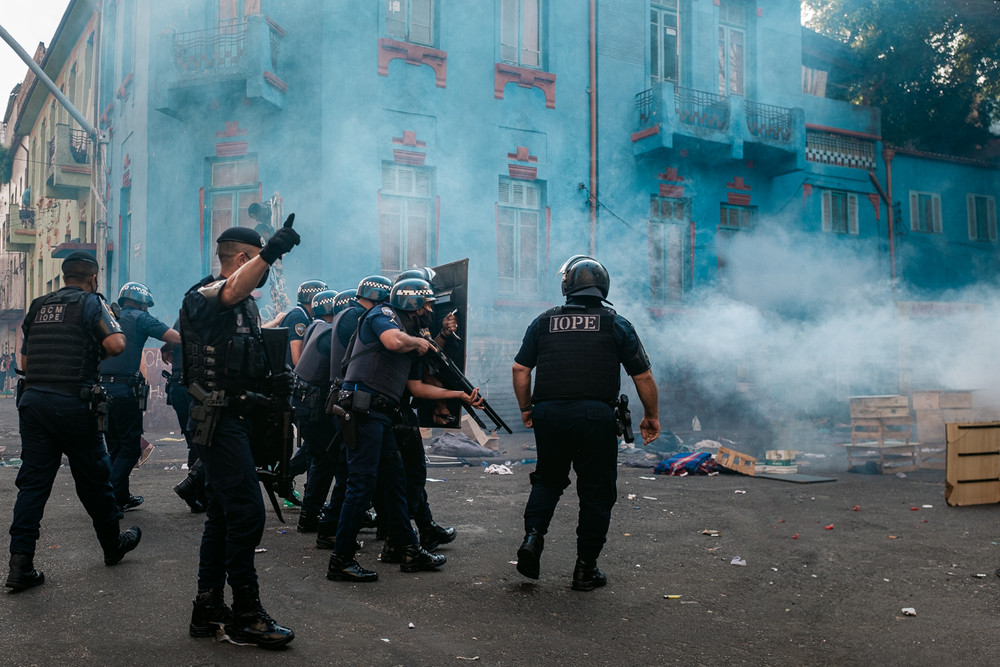 Violence in the neighborhood A moment of tension in october 2020 between police officers and addicted drug users. Such confrontations are frequent; In september 2020 , the city’s human rights commission declared that the measures adopted by public security have led to a surge in violence, with the misuse of non-lethal weapons, teargas and torture. 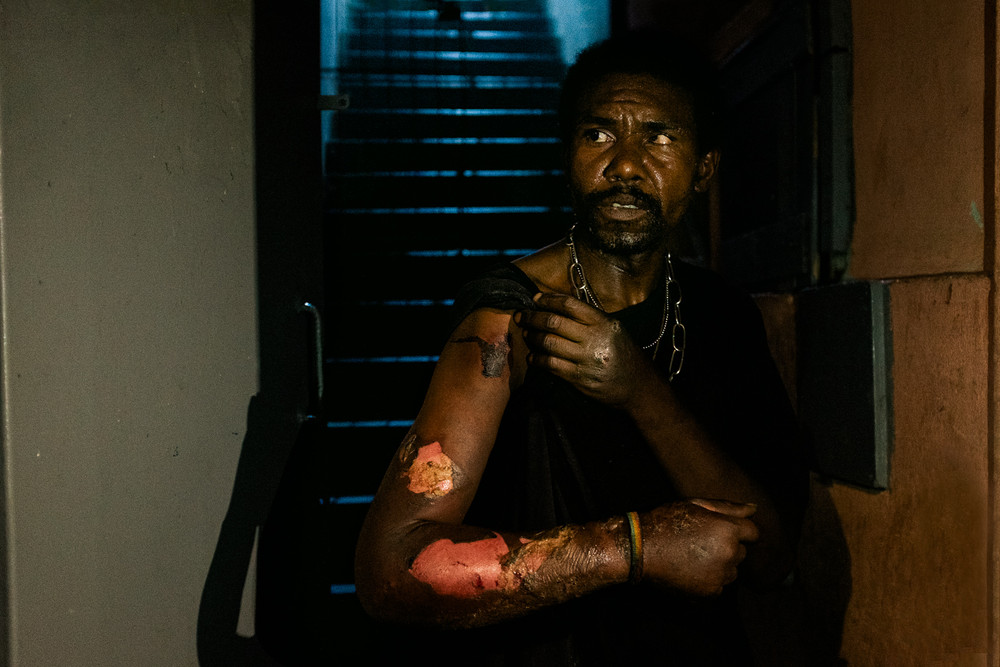 José Carlos
José Carlos was injured in one of the frequent conflicts between users and police. 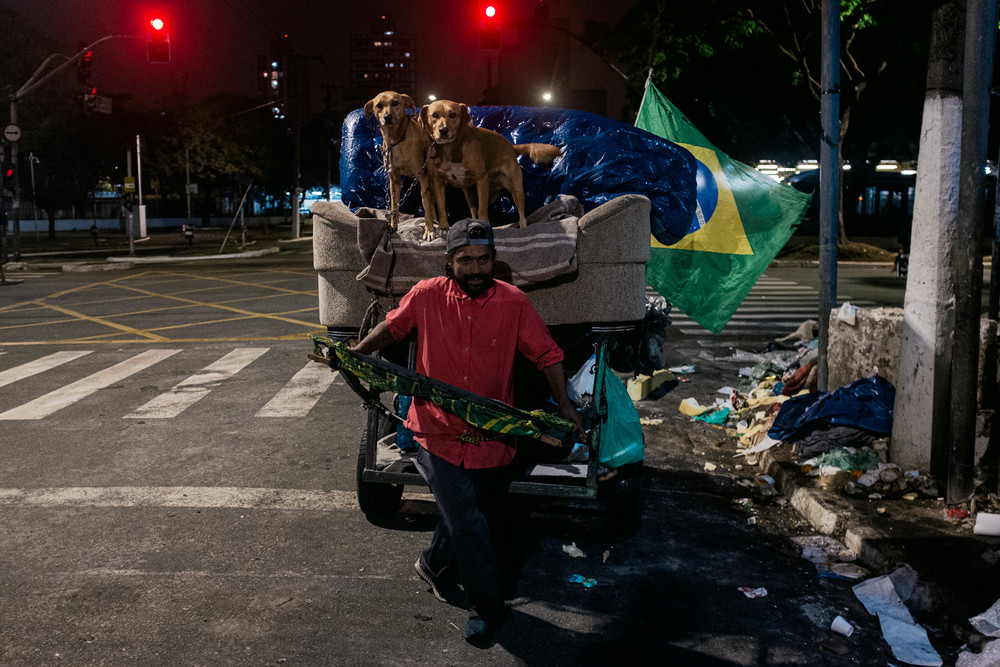 Walder
Walder with his dogs Maiara and Mayarisa. For Walder, his cart is a house and, at the same time a working tool. He earns his living by collecting materials such as iron, aluminum, plastic and cardboard on the street, which he later resells in the city’s recycling centers. The hard work is rewarded: with his cart to collect the materials Walder manages to earn up to 150 reais a day. 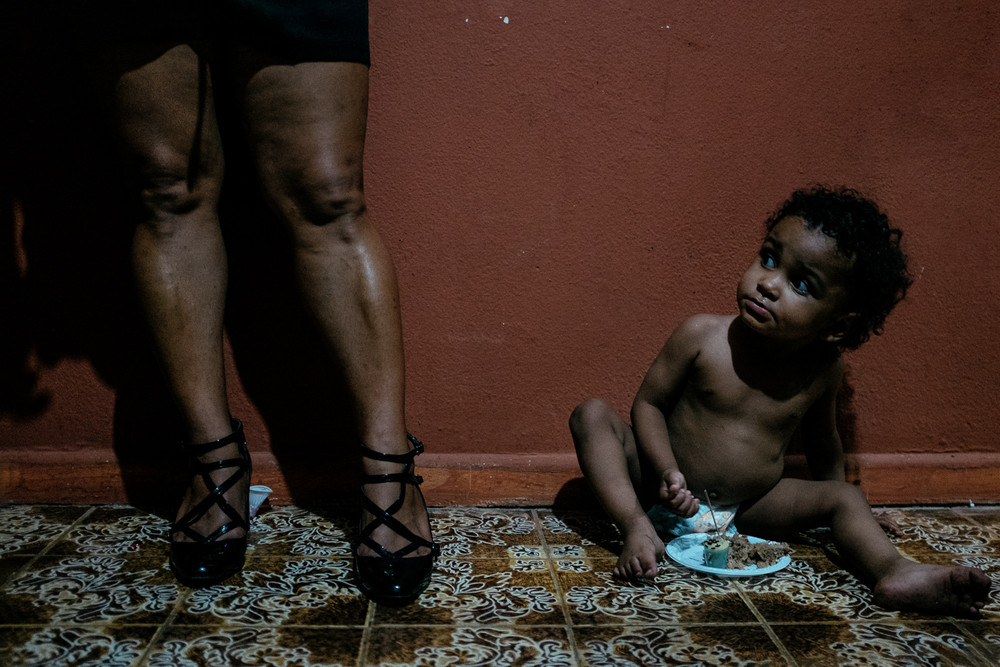 A birthday party
Birthday party in a tenement in the Cracolândia region. Even with a pandemic outbreak, there is no social distance in the region and almost nobody wears masks. Many wonder why the population so exposed has not yet been decimated. Users and residents of the area ironically joke that it is the smoke that keeps the virus away. 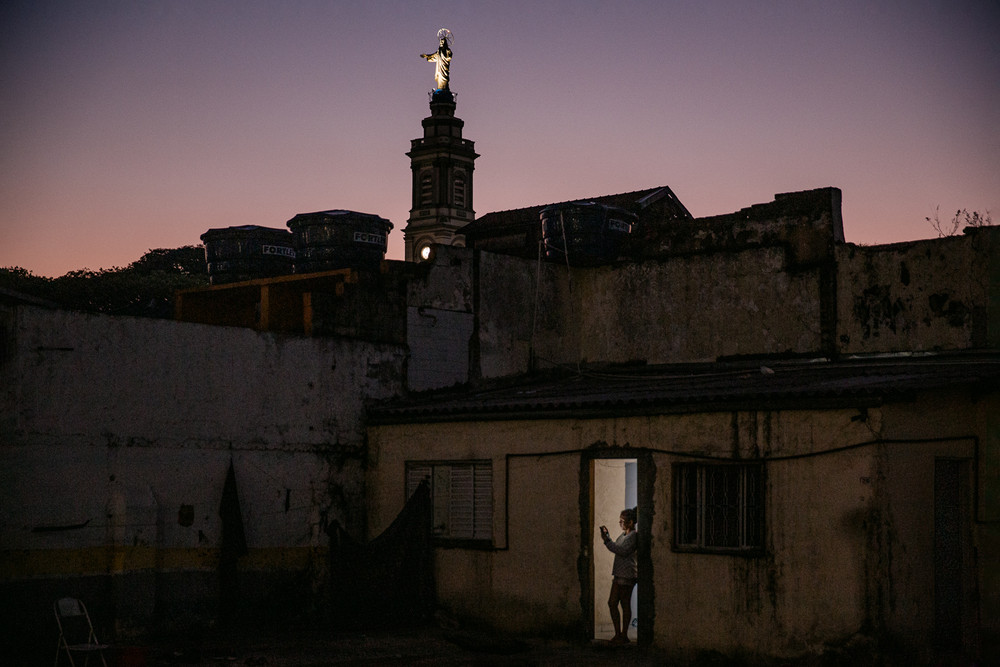 Tati
At nightfall, on the horizon, the statue of Christ the Redeemer, seems to watch over and protect those who live in this troubled region. Tati lives in the ruins of an abandoned parking lot next the concentration of drugs users. Those old buildings in the neighborhood will be demolished to build new housing. 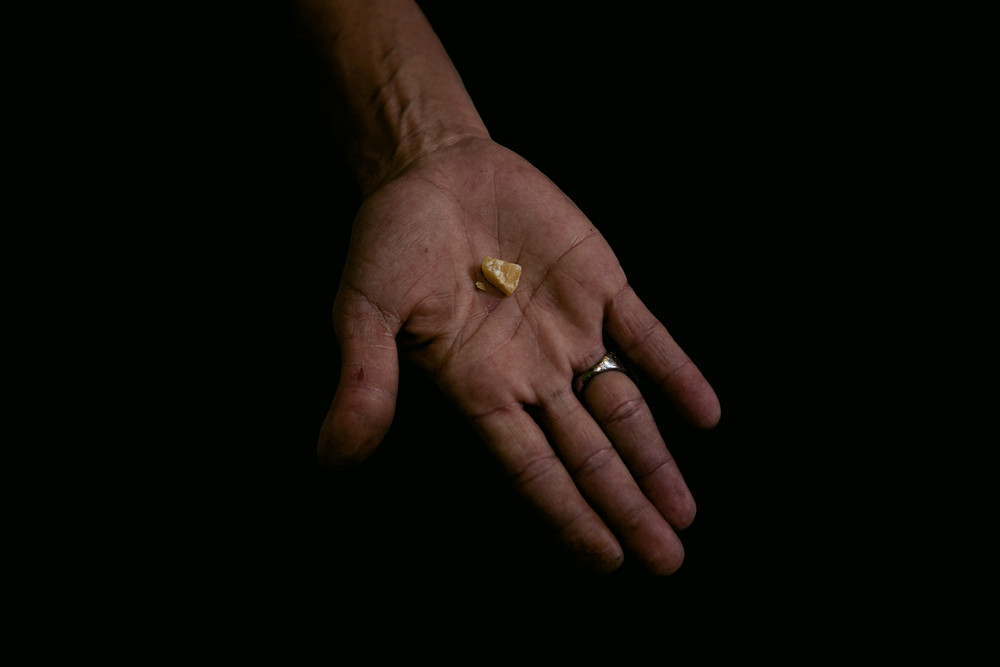 Half a gram of crack
Half a gram of crack paid 20 reais. It seems that everything in this suburb revolves around this seemingly harmless little rock. A survey by the UNIFESP (Federal University of São Paulo) Alcohol and Drug Research Unit revealed that, on average, 1,680 people consume drugs daily in Cracolândia. The study also points out that each user spends R$ 192.50 a day on crack.

Freelance documentary photographer, born in Milan in 1977, he has a degree in Sociology. In 2003 he moved to Bolivia where he worked with a Human Rights organization. In the last years he developed mostly personal and commissioned documentary projects. Since the end of 2014 he has been living between Italy and Brazil where he started a project about the megalopolis of São Paulo and he began to document the reality of the indigenous population in this Brazilian megalopolis. His work has been exhibited in international festivals and featured in international magazines. He’s member of Codici ricerca e intervento, independent research organization of Milano. He is member and contributor of EverydayBrasil and EverydayAmazon (EverydayProjects).