This long-term documentary work reports the difficulties suffered by people who migrate from their countries, due to war or hunger and want to reach Europe, in search of a better future. Since 2015, Europe has not left its borders and has intensified surveillance over them. In 2015, in Lesbos, Greece, thousands of people were forced to cross the Aegean Sea, on a very dangerous journey. In 2016 Macedonia closed its border, leaving thousands of people, living for months in a field between the mud and the train tracks that cross this border. In February 2017, hundreds of migrants are forced to live for months in the “barracks” of the old central station of the Serbian capital, with temperatures below -15 degrees. In 2018 and 2020, through Bosnia. From the forests, hidden, many families risk their lives to cross this border, when the police arrest these people, they are beaten and returned to the starting point.
In 2019 and 2021, the mountains of the Alps, between Italy and France, have become a step for migrants who want to reach the north of France or England. Due to police pressure in Ventimiglia, Italy, a somehow safer passage, migrants are forced to cross the snow-capped mountains of the Alps. In 2021, a new route is opened for migrants who have been living poorly in Calais for years. They put themselves in the hands of traffickers, to cross the English Channel in small boats. Once at sea, the traffickers leave them to their own faith, to cross the 30 kilometers that separate the two countries. So far, 11 deaths have been counted. 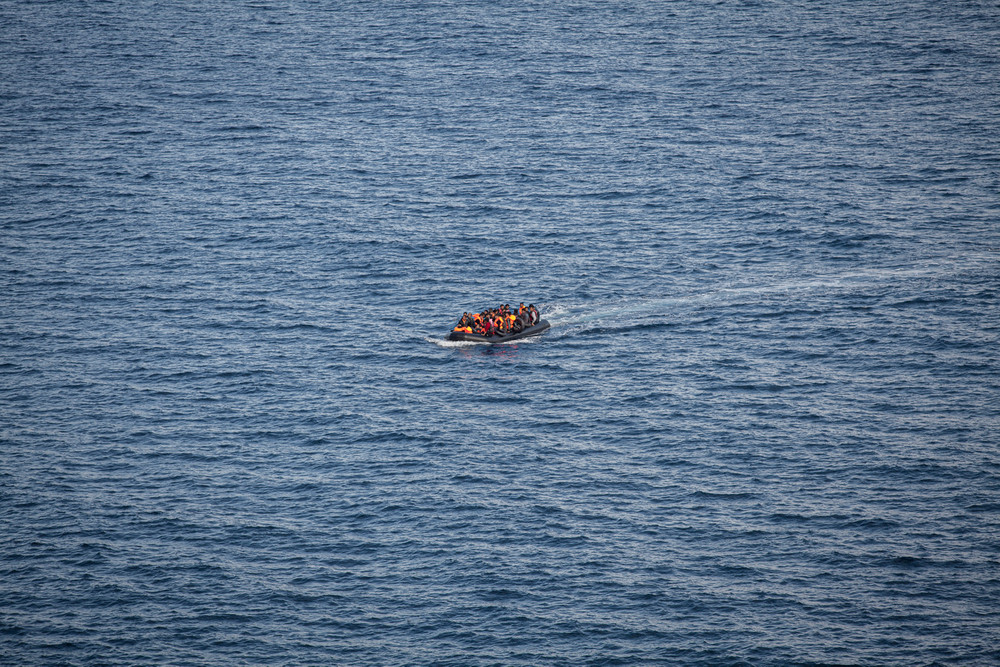 In September 2015, thousands of migrants crossed the 9 kilometers that separate Turkey from Greece, in the Aegean Sea, towards Lesbos, fleeing the war in Syria. In the photograph, an overloaded plastic boat crosses the Aegean Sea towards the north coast of the island of Lesbos. It is estimated that approximately 800,000 people have arrived on the island fleeing their countries, and 800 migrants have died.. 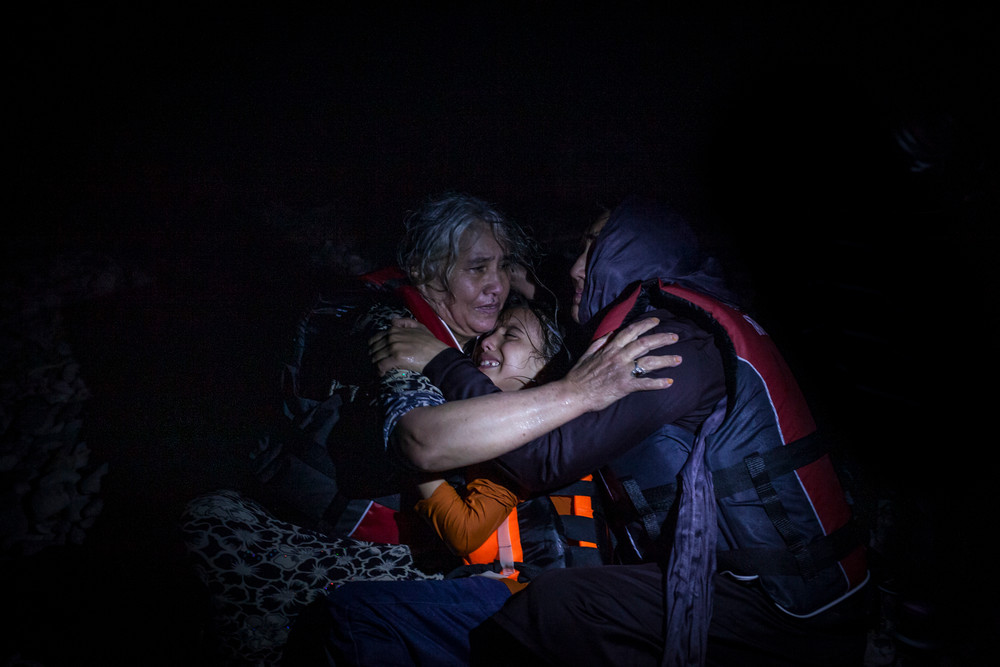 An old woman hugs her daughter and granddaughter, after having crossed at night, from Turkey to Greece, on Lesbos. Human traffickers force to pay about 1,200 euros for each person who wants to make this dangerous journey. They organize groups of people who want to cross this route, and force them to get on plastic boats, overloaded, and with fake life jackets, which further increases the danger of crossing this Sea. 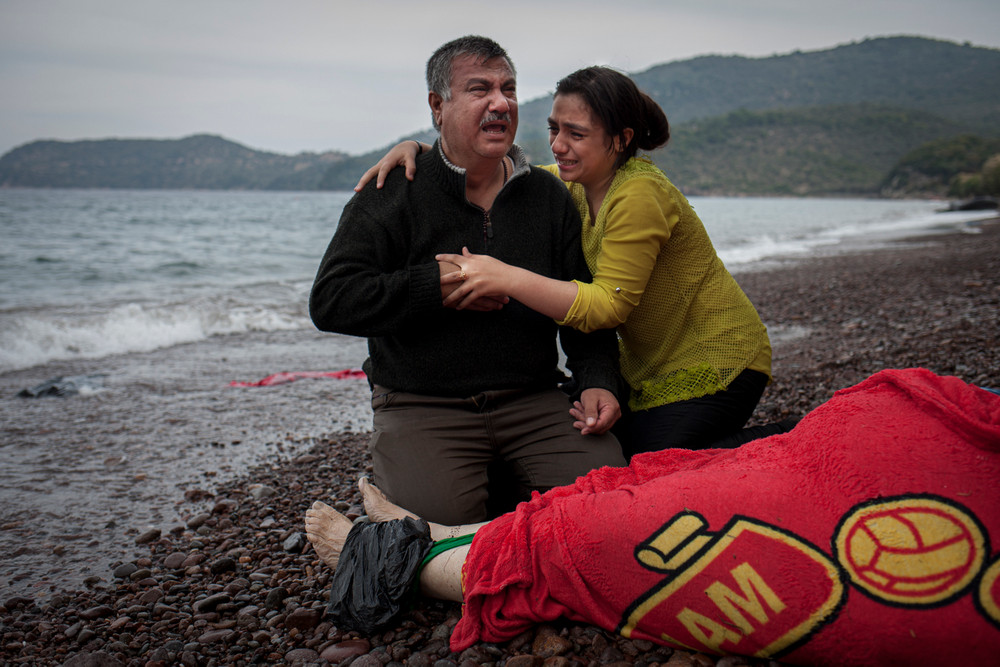 The father and his daughter mourn the death of his wife, due to hypothermia, on a beach in Lesbos, because the boat in which they crossed the Aegean Sea to reach Greece, remained for hours in the drift. 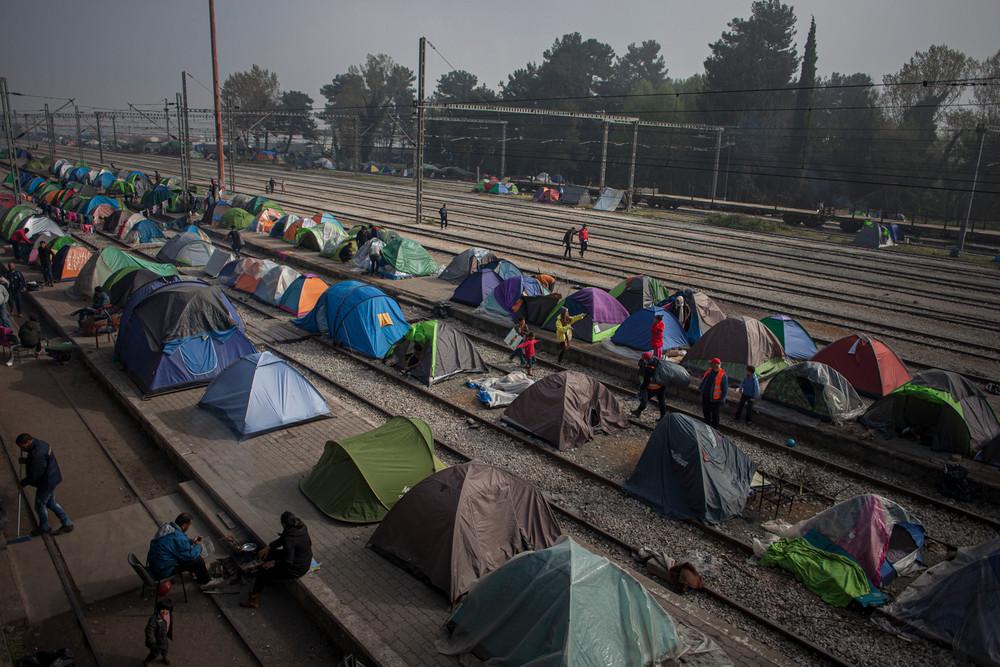 For more than three months, 14,000 people, including 4,000 minors, lived in tents on the tracks of the train that crosses the border between Greece and Macedonia, in Idomeni. 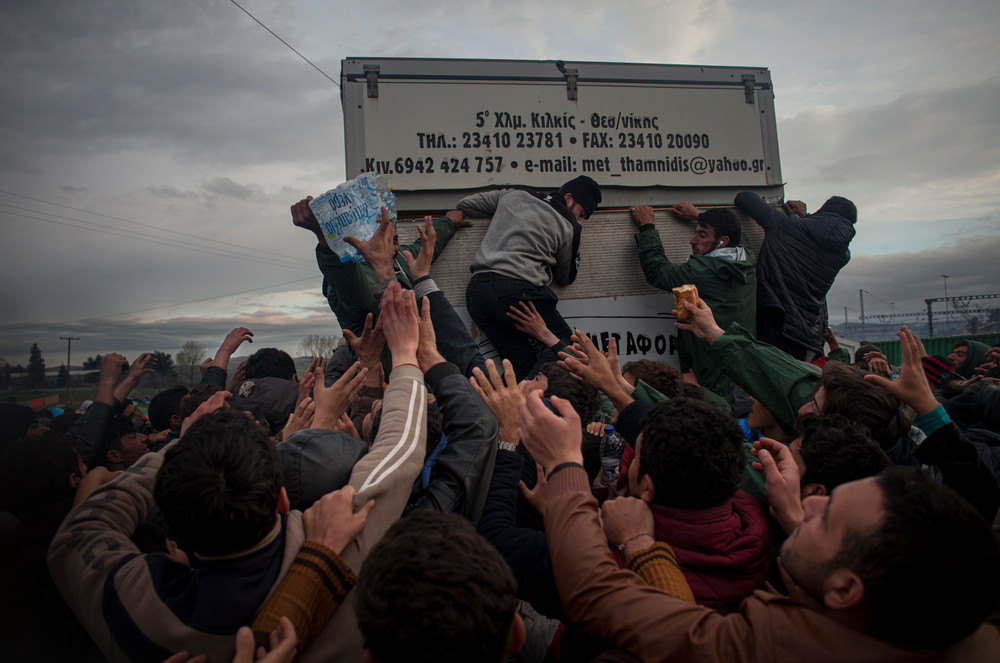 In the small town of Idomeni, in March 2016, 14,000 people were trapped in transit to Europe. Due to the closure of this border that the Macedonian government ordered, these people lived badly for months, without food, without electricity, with rains, on this border. 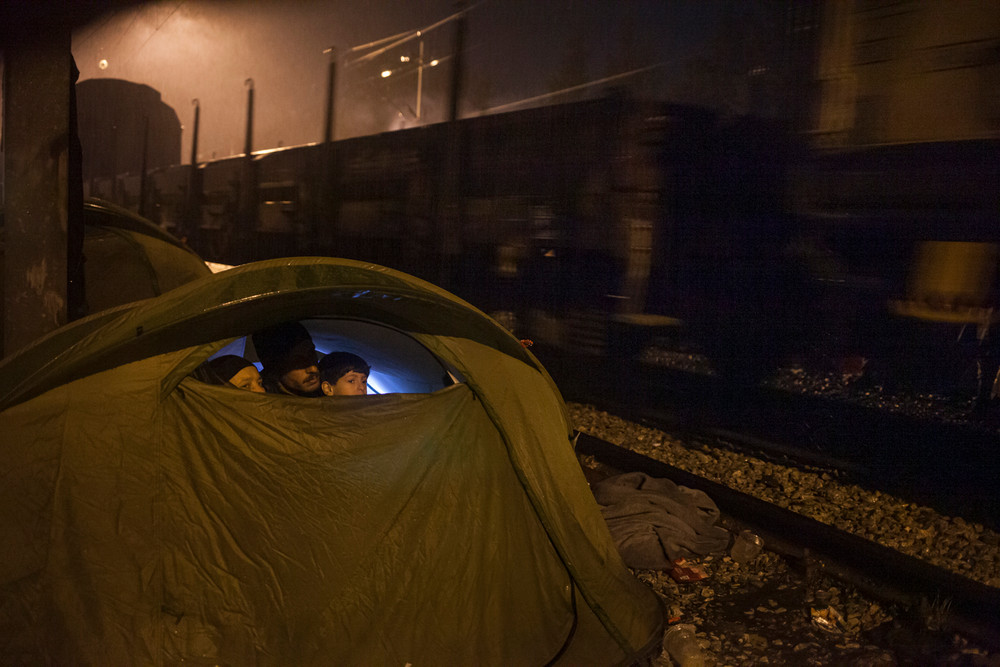 A family from Afghanistan watches from their store next to the train tracks that cross this border, as a freight train passes, towards Macedonia, Europe. Shortly after, the Greek government, evicted this makeshift camp, locking up all the people in militarized camps scattered throughout Greece. 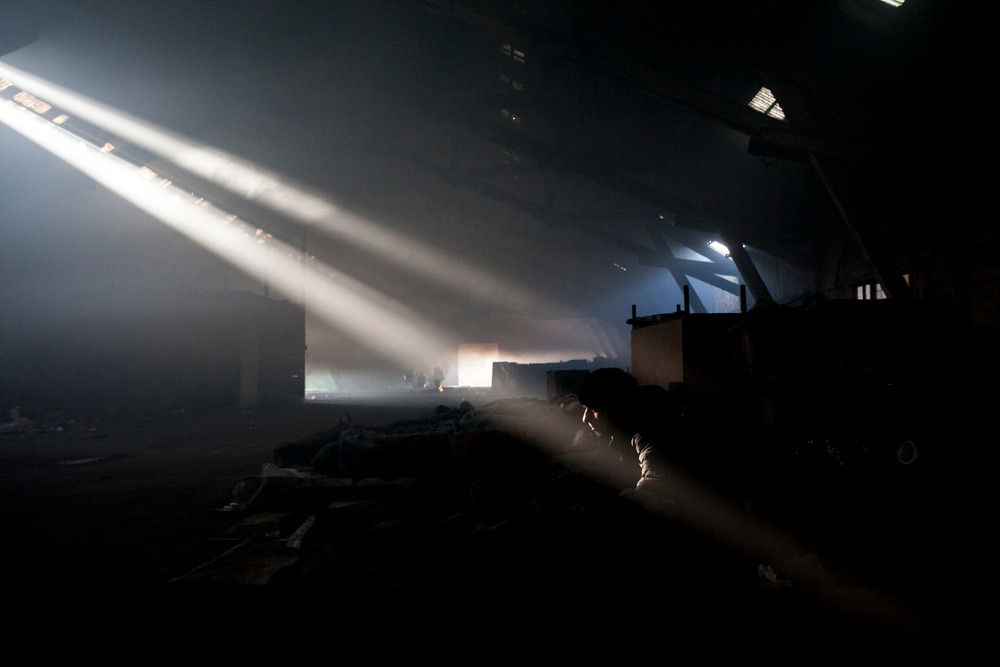 A migrant from Afghanistan, inside the barracks of the old central station in Belgrade, waits for the right moment to get on the train that will take him to the border with Bosnia. Temperatures in Serbia in winter can drop to -15 degrees. 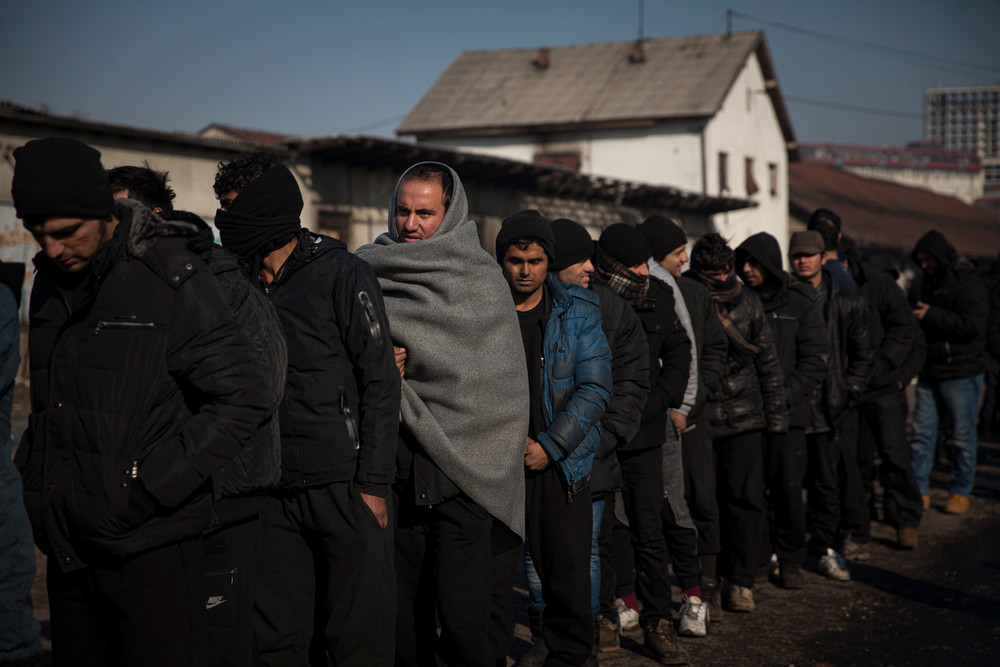 Row of people to get a food ration, in the barracks of the central station of Belgrade. Only one NGO, (No Name Kitchen), could give this food ration to the hundreds of migrants who spent months in these conditions.

Hundreds of migrants are living in the barracks of the old central station of Belgrade, on their way through this city, towards Bosnia, in their attempt to reach France, Germany or England. Without food, without electricity, without sanitary services, these people try to raise money to continue their journey. Many need months before resuming their route. 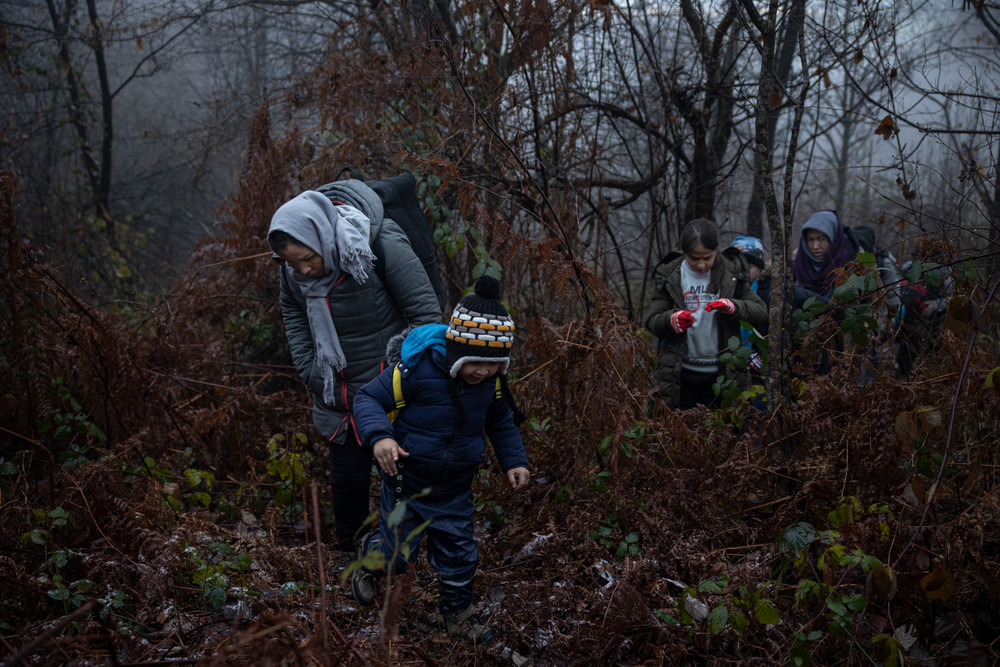 THE GAME, that is what migrants call the fact of crossing the border between Bosnia and Croatia. A border that over the years has been fortified with police, motion sensors, drones, etc., to prevent the entry into Europe of thousands of migrants from Afghanistan, Iran, Pakistan, among others. Many of these migrants have been trying to do GAME for months, but when they are intercepted by the police, they are often beaten and sent back to Bosnia. Alia and her son hike through a forest after crossing the Bosnian-Croatian border. After walking several kilometers, they have entered the humid forests of Craocia. They walk quietly, so as not to be discovered by the police, since most of the time, if they are intercepted by the police, they are beaten and sent back to Bosnia. 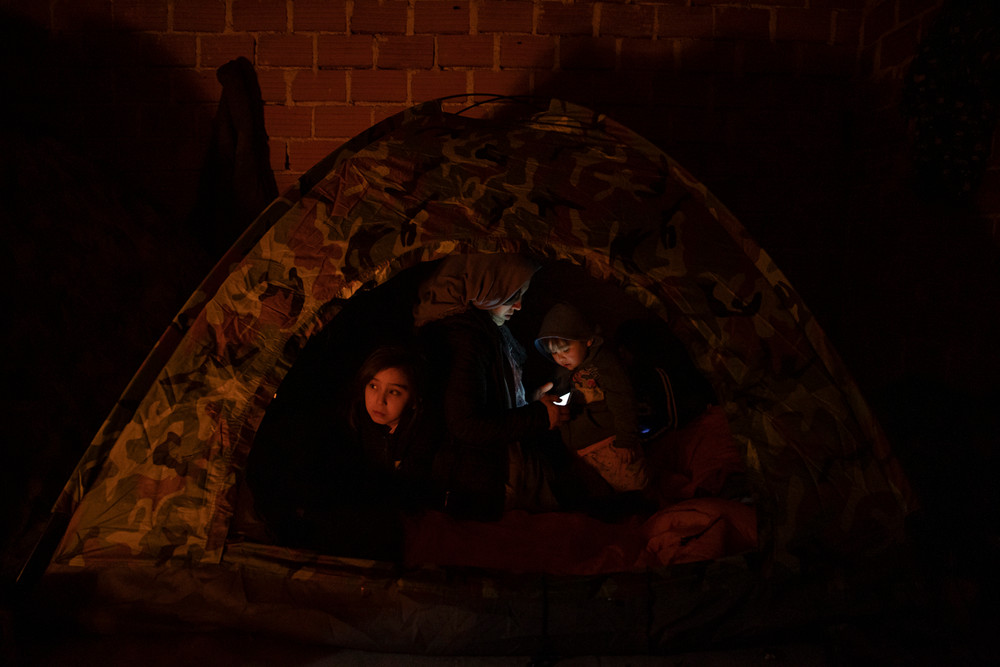 Malika and her children, housed in a tent in an abandoned house near the Croatian border, look at the map on their mobile phones to try to cross the Bosnian-Croatian border the next day. 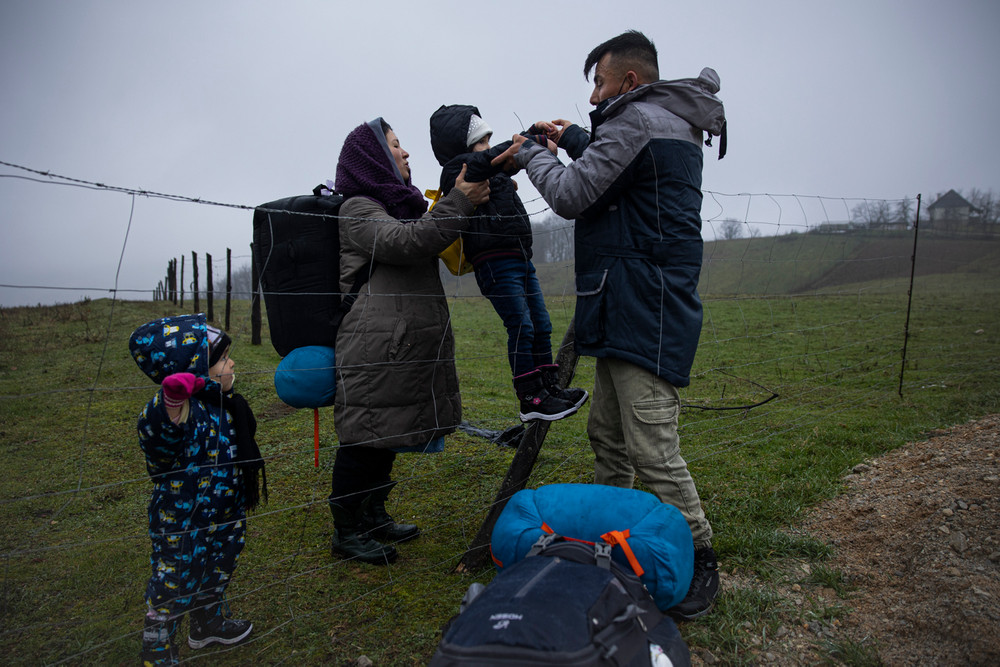 Malika passes her 5-year-old daughter to her husband Mohammed over the fence, on the border between Bosnia and Croatia, in the small town of Velika Kladusa. 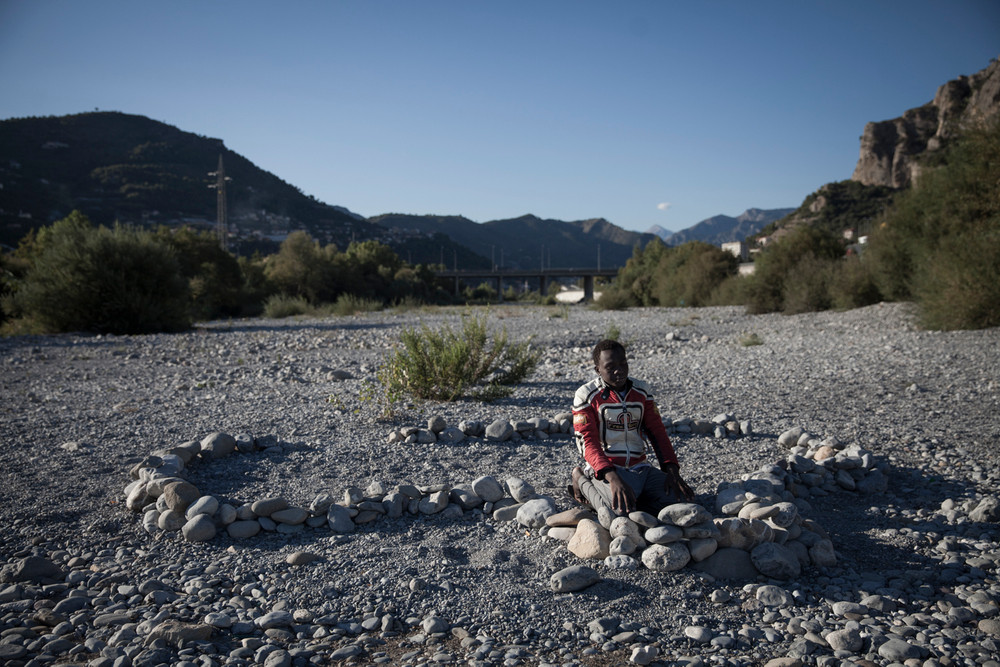 A migrant from Eritrea prays near the river that crosses Ventimiglia, in Italy, before crossing the mountains of this town to cross to Fracia, to Menton, but continue on his route to Paris. To cross this mountain, you must walk for 3 hours, and overcome a difference of 1200 positive meters.

A cross marks the place where in 2017, a migrant died of hypothermia was found when trying to cross these mountains, to enter France. Because of this fact, police pressure on the other side of the border increased, and the police now intercept people who cross this route. 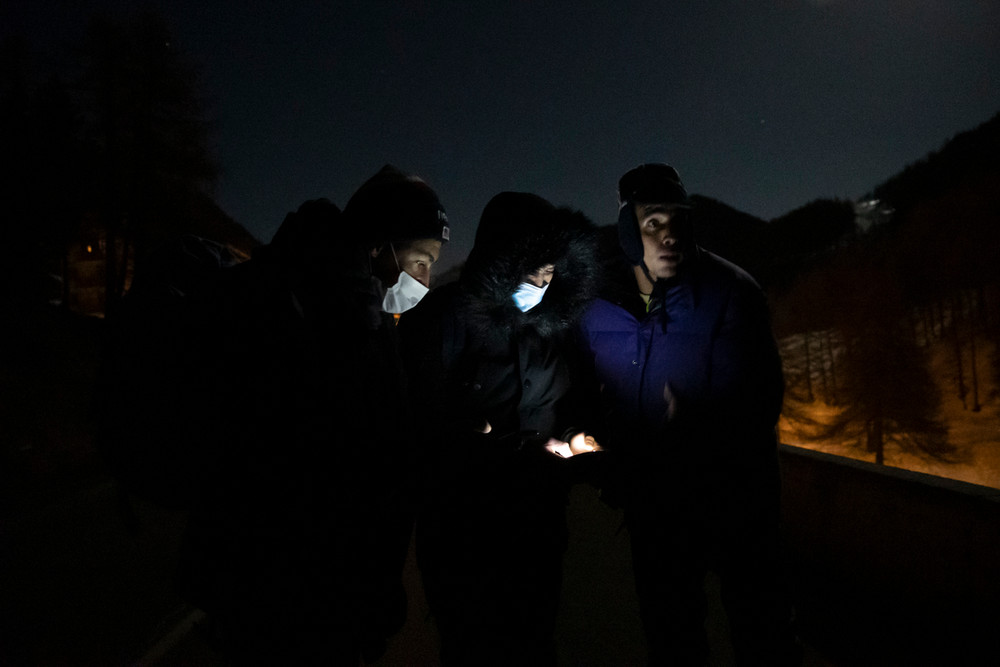 Three migrants look through the mobile phone, the way to go, to be able to cross this border of the Alps, without being detected. Due to police pressure in southern Italy, where it is less dangerous to cross, people who want to reach Paris or England are forced to try the snow-capped mountains of the Alps. 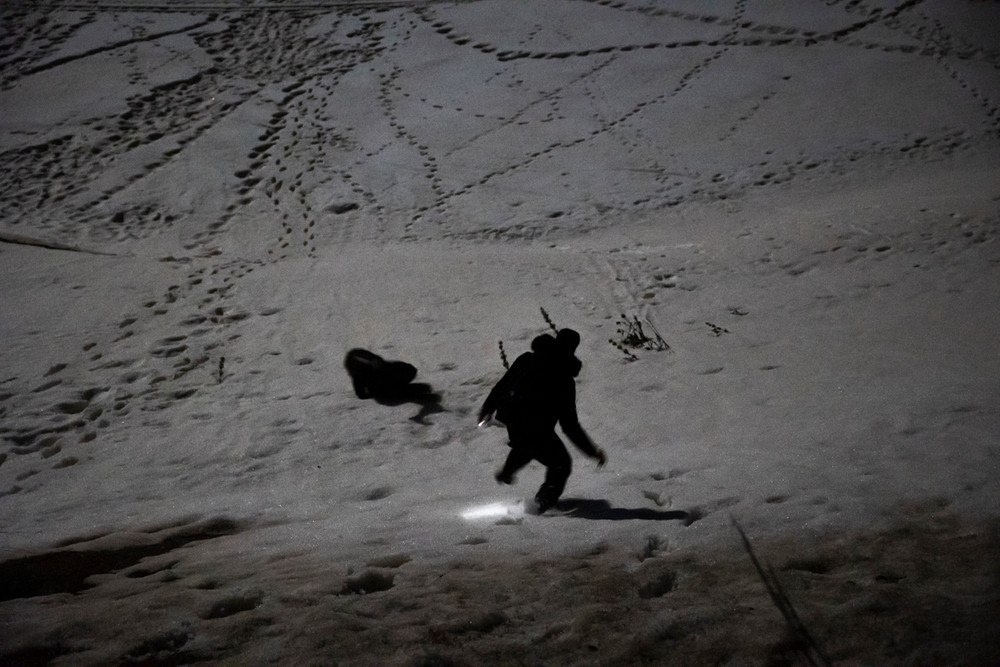 Due to strong police pressure in southern Italy, people who want to reach France or England are forced to cross this much more dangerous route. The route of the Alps. A migrant tries to help his fallen friend down the steep side of these mountains in the Alps. The low temperatures and the snowy and irregular terrain make this route one of the most dangerous to be able to cross to reach the north of France or the United Kingdom. 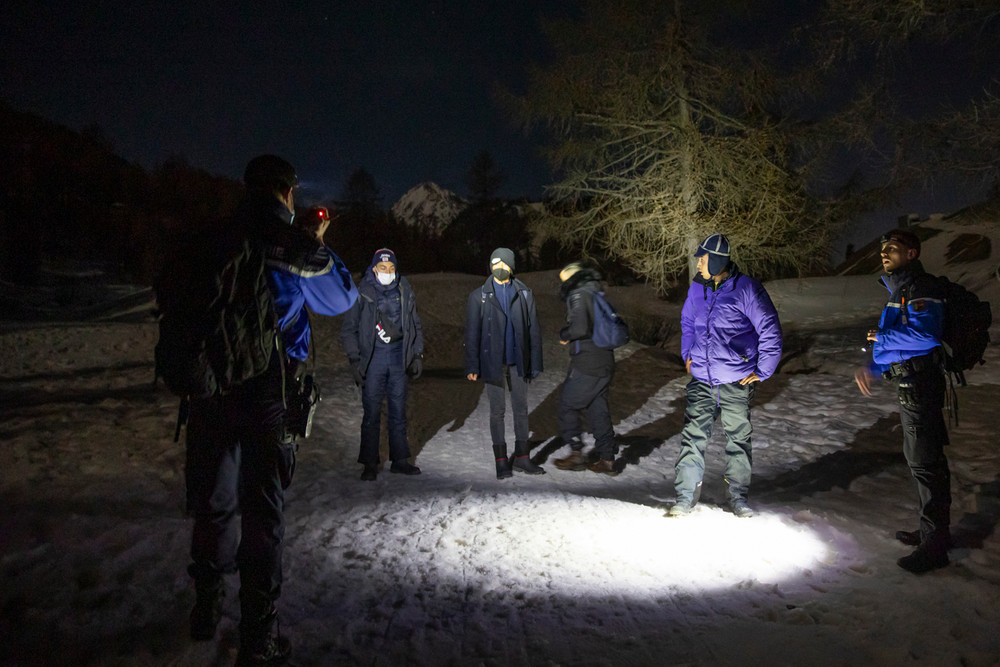 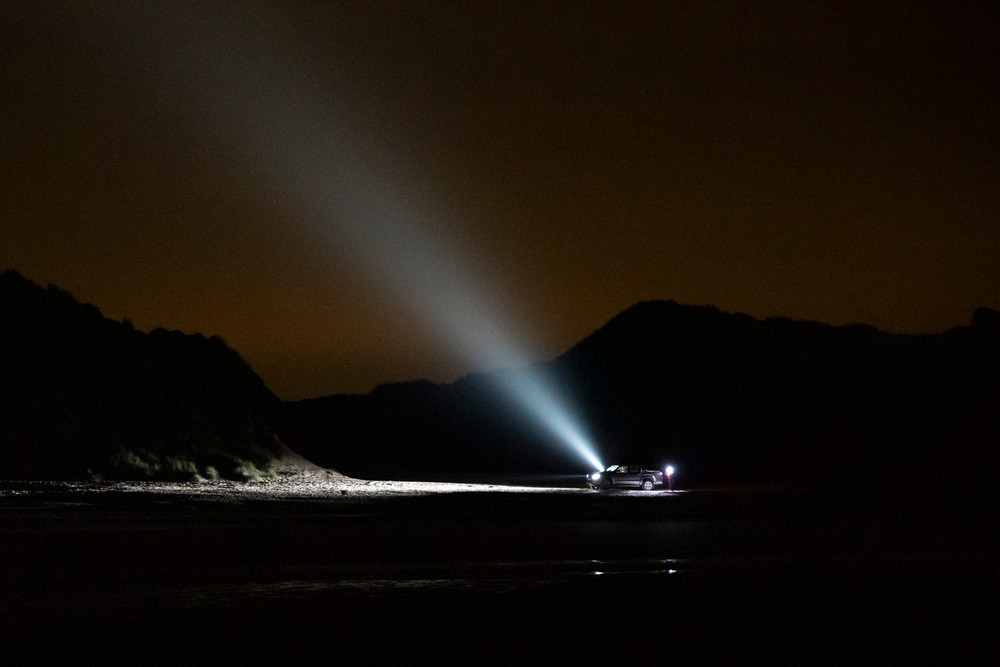 A French police patrol searches for migrants hiding in the dunes of Wimeraux beach in Nord Pas de Calais. People who want to cross the channel, hide at night in these dunes, so when it dawns to be able to get on the boat to try to cross the English Channel by day and thus be less dangerous. 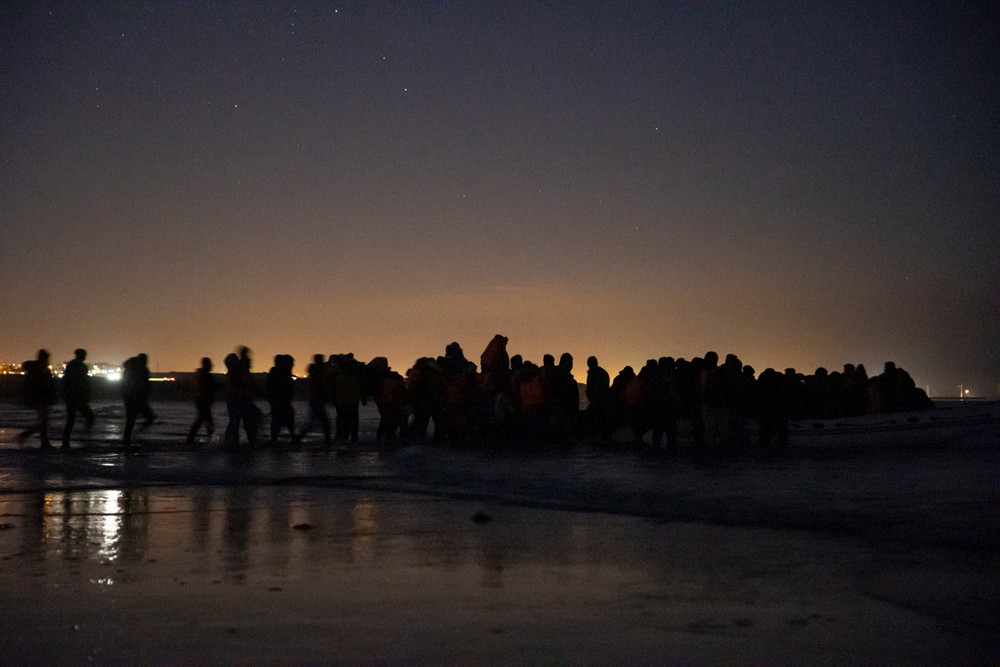 In recent months, this route has been opened, which consists of crossing the English Channel, in boats at the hands of “passeurs”, human traffickers. They organize groups of migrants who want to reach Ingletarra, stopping at night and paying 2,500 euros per person, they put them on a boat and leave them to their own devices. In the photograph, a group of about 80 migrants, get on one of these boats, to cross the channel. 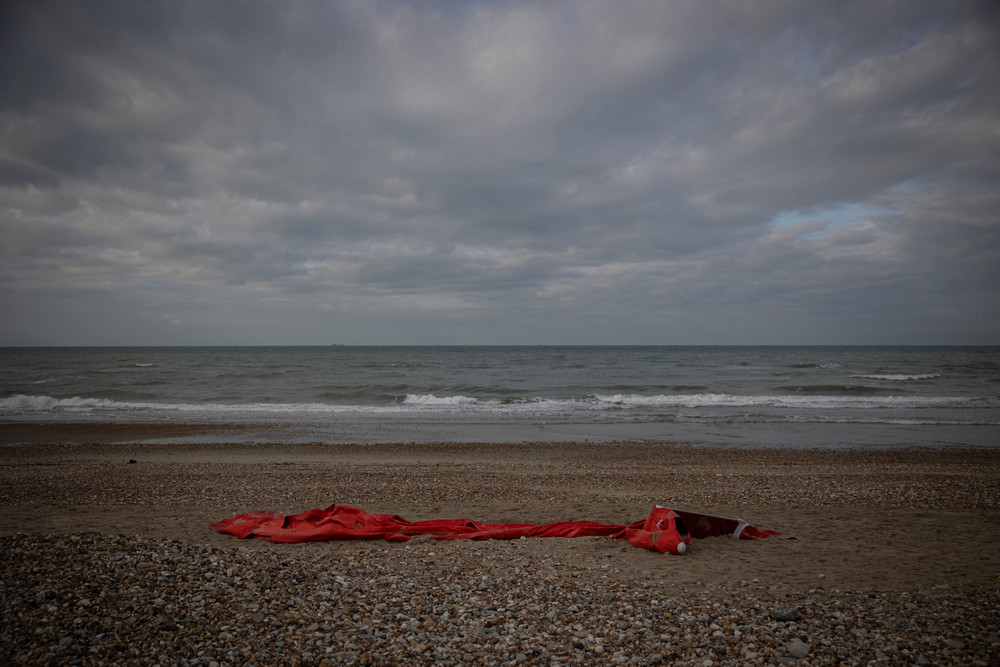 In August of this year, more than 800 people crossed this route in a single day. To date, 11 people have been killed trying to cross the English Channel. This canal is the busiest in the world for cargo ships.

2003 – PHOTO JOURNALISM study at the IEFC (institut d’estudis fotogràfics de Catalunya).
2004 – Photo essay course in conflict zones at the IEFC.
Between 2005 and 2009 different courses and workshops such as PHOTOGRAPHY AND JOURNALISM MEETINGS IN ALBARRACÍN, PHOTON in Valencia or HUMAN JOURNALISM in Madrid, added to my learning.
In 2010 I publish EL PESO DE LA POBREZA, a documentary about women porters on the fence of Melilla.
2011 – I start working as a photojournalist in the EL9NOU newspaper, in central Catalonia.
2013 – I publish HOLIES, a photo essay about the Ghanaian community in Spain.
Since 2015, I have focused my work on documenting migrations across the different borders of Europe.
Work published for the AP (Associated Press) and for the AFP (Agence France Press).
2020, I have documented the COVID-19 Pandemic, in Spain, for ELDIARIO.ES.
In 2021, I published a documentary research work on animal slaughter companies, for the OPEN SOCIETY FOUNDATION.