In the shadow of the Vesuvius, the area of Naples is subject to a major political, ecological and sanitary furore. During twenty-two years, about 10 million tonnes of industrial waste have been buried illegally, with the help of the Camorra, the local mafia, and the complicity of the mayors of the 106 municipalities. The industrial waste, repurchased by the mafia at a very interesting price from 450 Italian and European companies, have been blended with urban waste and abandoned in open dumps. The fires triggered from time to time to reduce the amount of waste, and whose fume are extremely toxic, have given its name to the Land of Fires. The scandal broke in 2013 when a study made by the American army at Corney Park base to control the standard of living of the soldiers based in the area of Naples revealed a high level of water pollution in the region. The report, which concluded that there was an « unacceptable health hazard » notably due to the presence of uranium, enlightened the link between the waste illegally buried and the environment contamination, thus revealing the significant consequences of this smuggling on economical and sanitary fronts.

The number of congenital malformations is 80% superior to the national average, and the number of cancer accounted for in the area is in constant increase. Besides, cultivated land pollution damaged the important agricultural activity, subsequently threatening to impact on local agrifood industry.  Lately, in early March 2021, the Italian National Institute of Health released a too-long-awaited report on the health impact of toxic waste buried, confirming the actual connection between the exponential increase in congenital pathologies as the current cancer epidemic caused by prolonged exposure to corresponding carcinogens. In spite of the clamorous ISS report, the Government substantial silence continues. 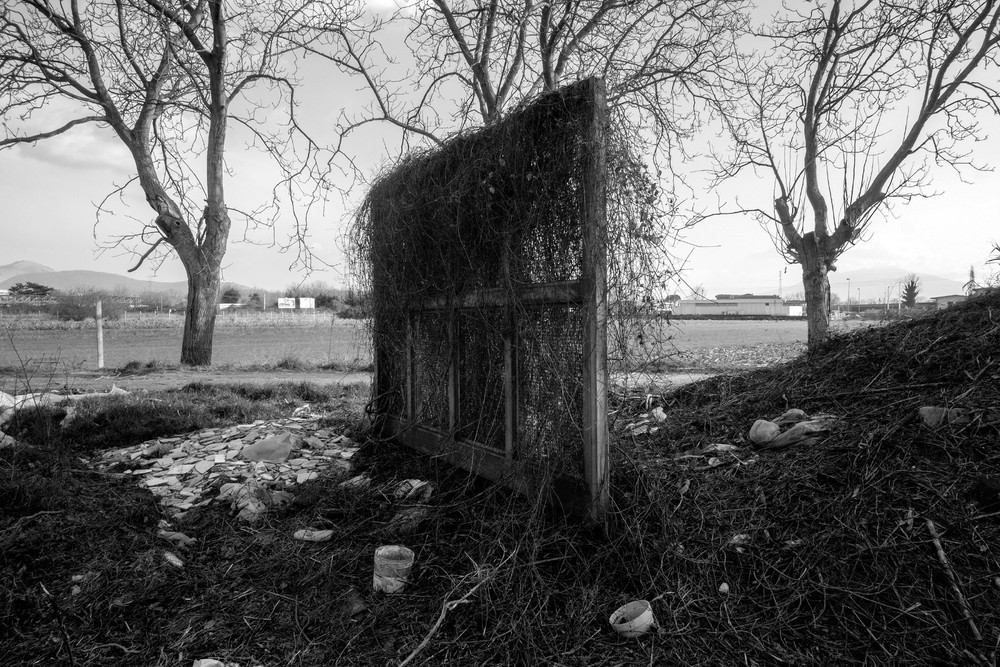 Maddaloni, Feb 2015: The entrance Gate to “Cava Masseria Monti”. Once used as a drilling spot for Tufa Rock, popularly used in local constructions. The spot was then recicled as a dump site, mostly filled in illegal manners, it is now part of the land confiscated by local authorities as highly contaminated and unsafe. 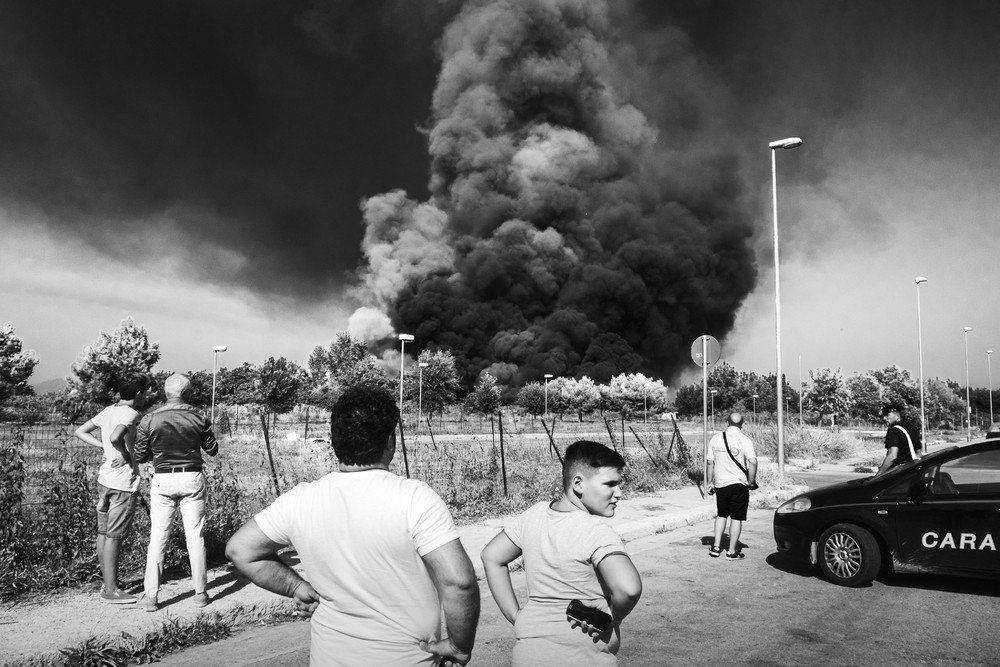 Giugliano, Caserta, Sept 2015: Residents are watching at the toxic column of black smoke coming from an impound lot for confiscated vehicles while it is burning fully up to the last car. as a drilling spot for Tufa Rock, popularly used in local constructions. The spot was then recicled as a dump site, mostly filled in illegal manners, it is now part of the land confiscated by local authorities as highly contaminated and unsafe. 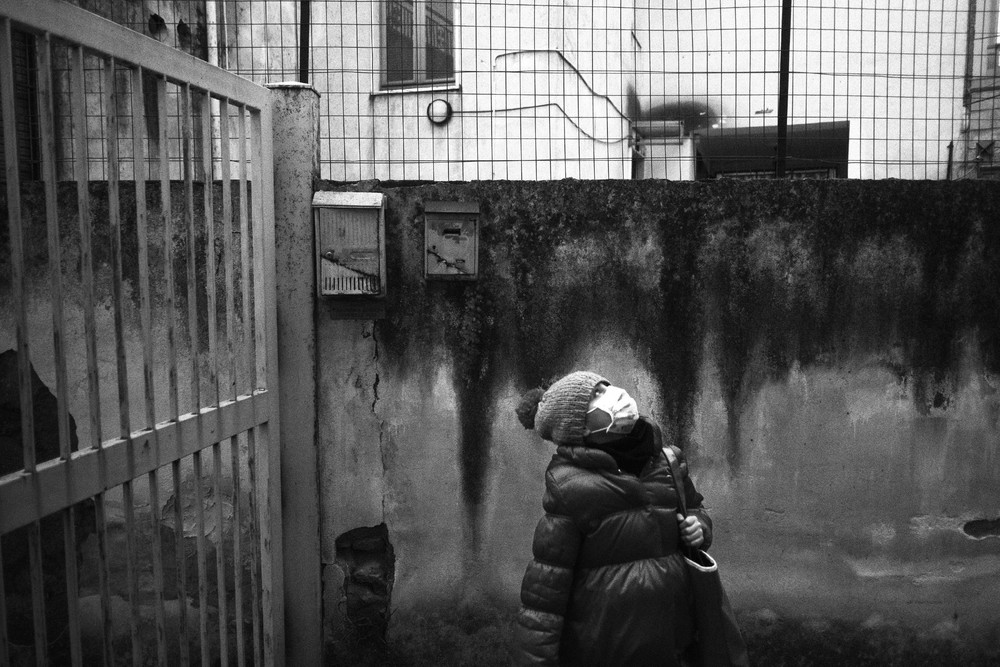 Boscoreale, Naples, Italy. March 2015. Flavia is just back at her grandmother’s house after having received chemotherapy treatments at Pausillipon hospital 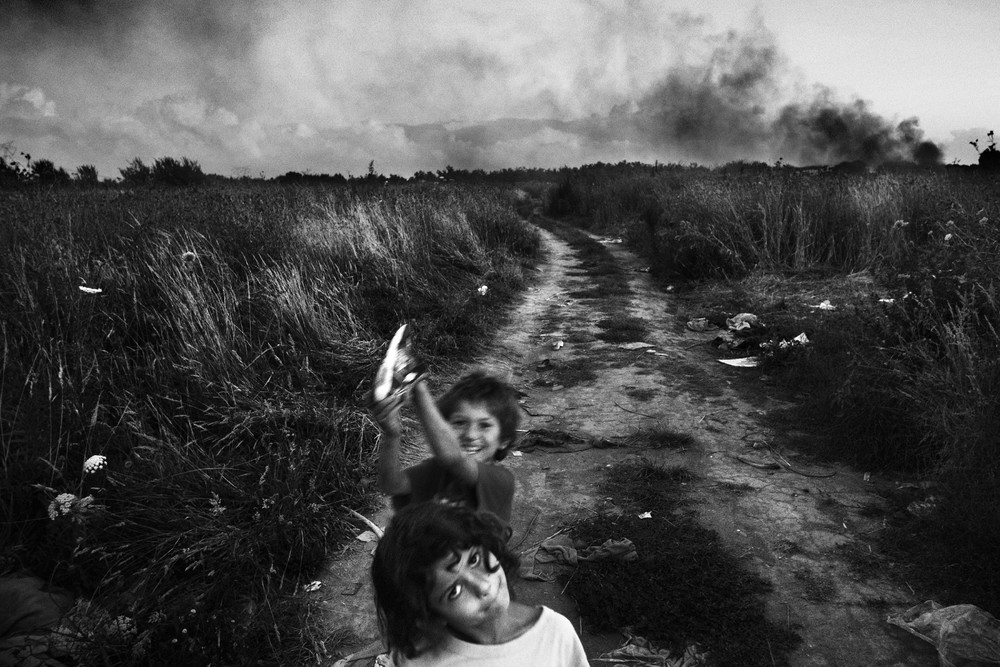 Giugliano, Italy. October 2014. Boys playing in a Roma camp next to a toxic waste site. Some toxic materials are burning just few yards behind them.

Giugliano, Caserta, Sept 2015: an impound lot for confiscated vehicles is fully burnt, up to the last car. 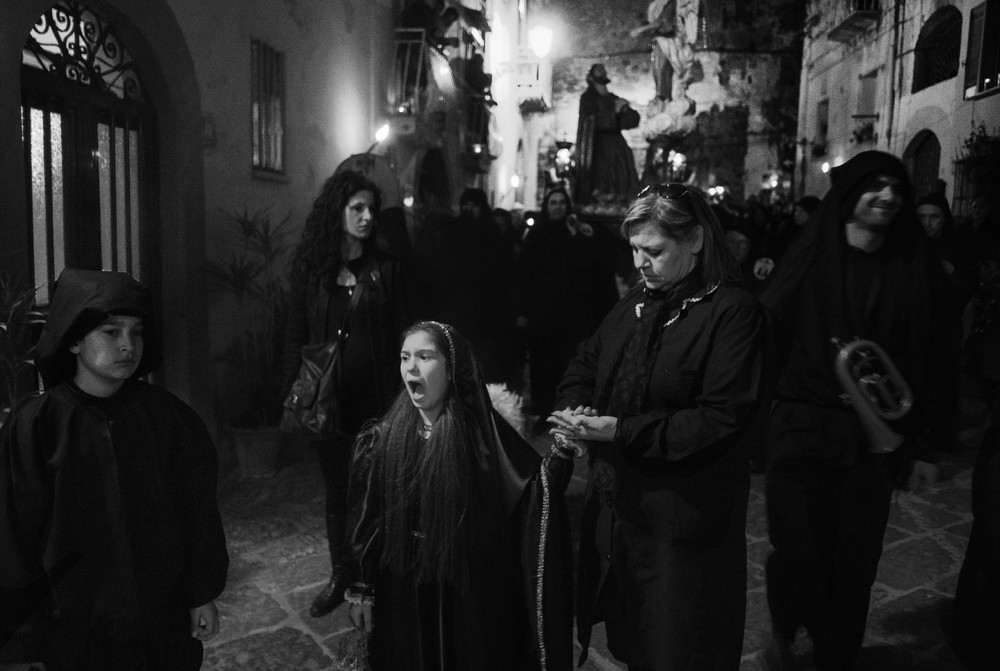 Sessa Aurunca, April 2014: Easter calebrations in a village situated just on the northern side of the “Triangle of Death” and located above a dismissed nuclear plant that have never been cleared. 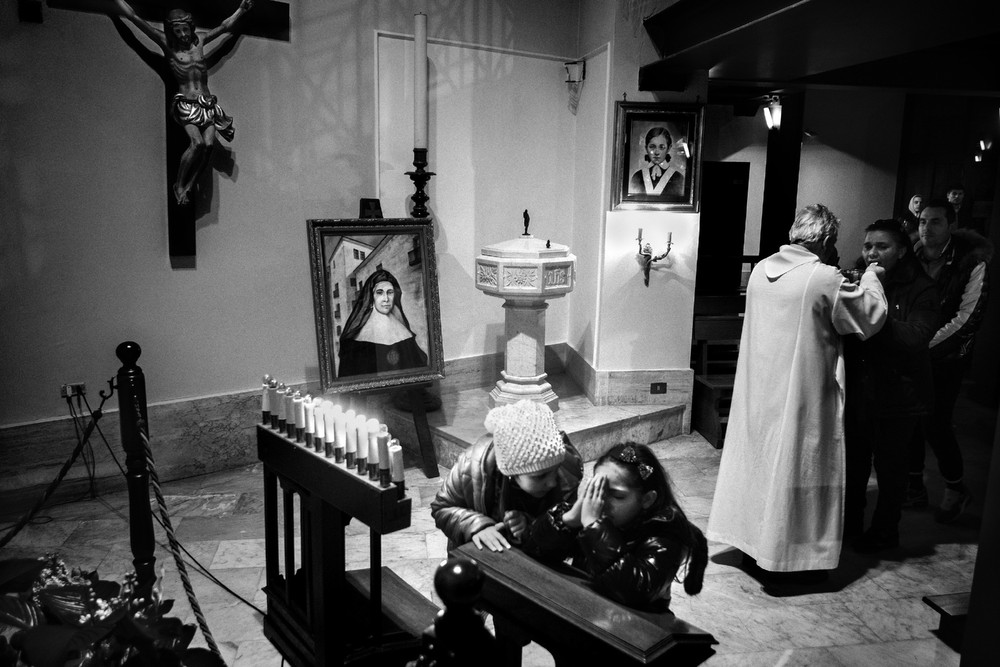 Caivano, Mar 2015: two little girls are praying during the funeral cerimony held for the magistrate Federico Bisceglia died in an apparent car accident on the highway to Naples. He was investigating on local camorra affiliates involved in the illegal dumps affair. 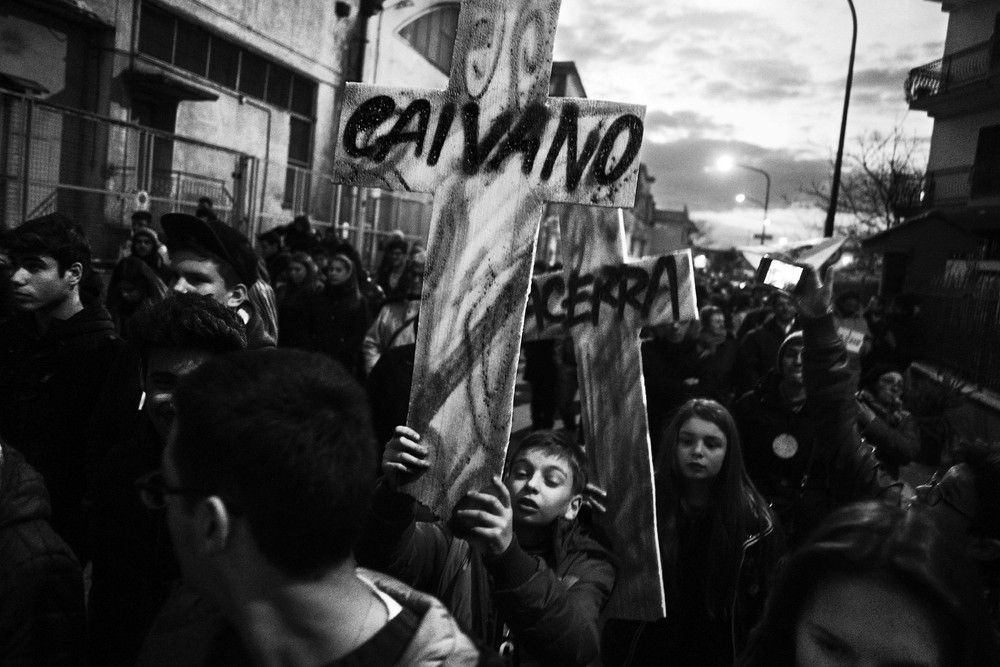 Marigliano, Feb 2015: a group of kids are taking part to a protest against government unfulfilled promises. The last Letta’s government ratified a law which is considered unconsistent to solve the problem. 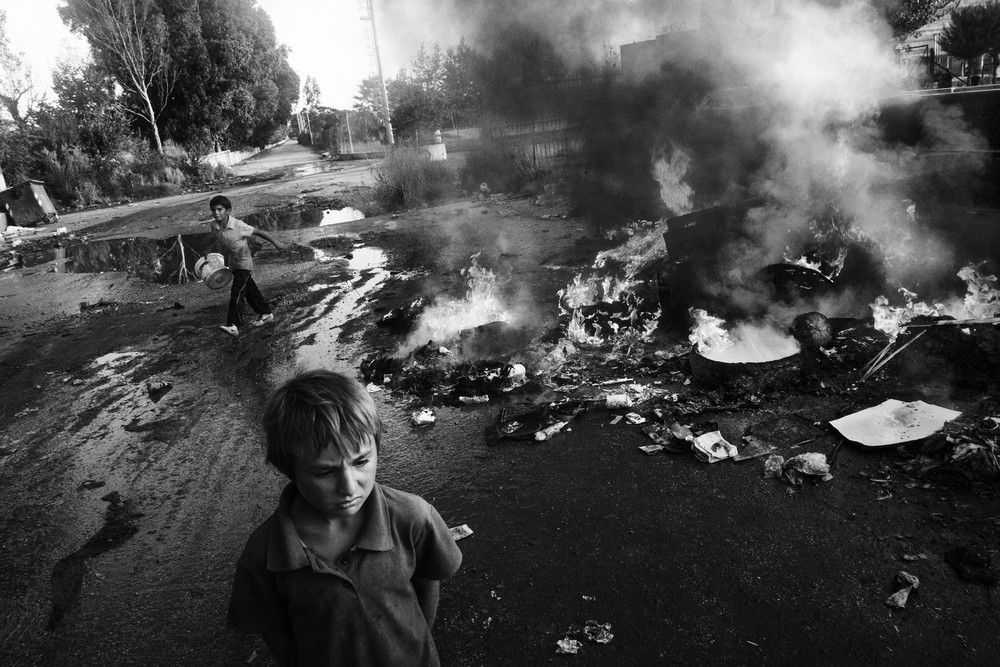 Giugliano, October 2014: A Roma child residing in a camp that lays just upon an illegal landfill is standing a burning toxic fire. 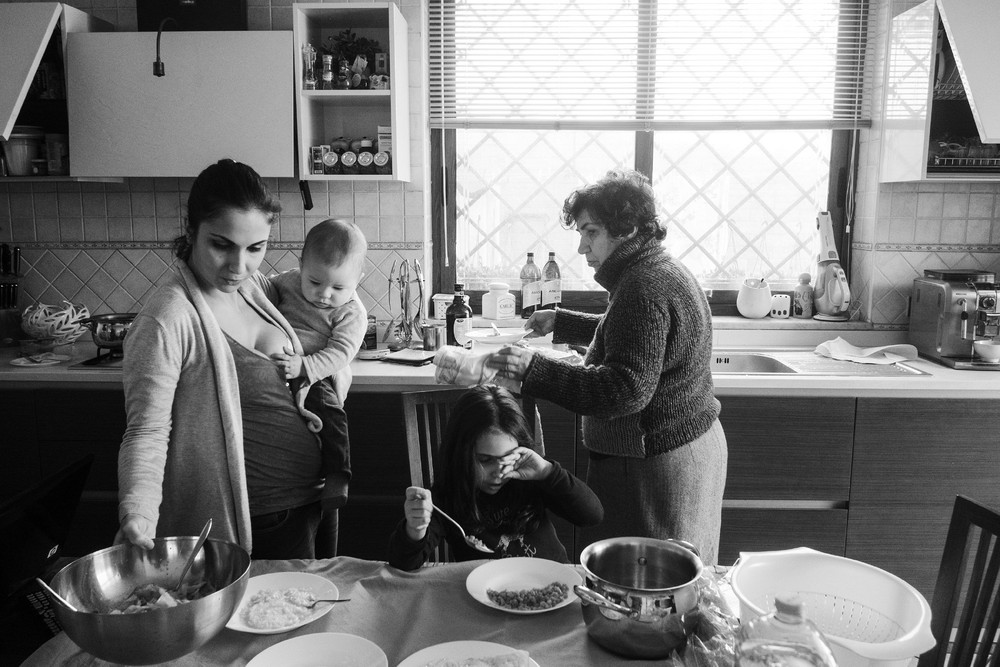 Boscoreale, Naples, Feb 2015. Flavia’s grandmother, sister and aunt holding Francesco. Francesco is 9 months old in the picture and he was born after multiple attempt of her mother and father to have an assisted pregnancy because her ovaries were surgically removed because of a tumor.

Naples, July 2016: A toxic fire burning in the coun try side is releasing smoke and ashes in the farms around. 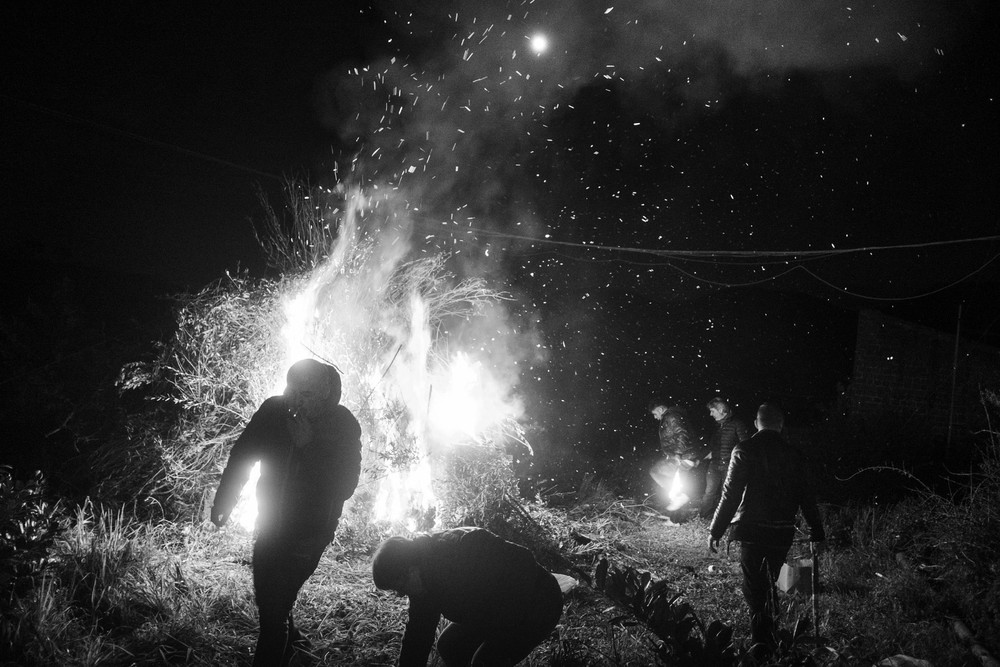 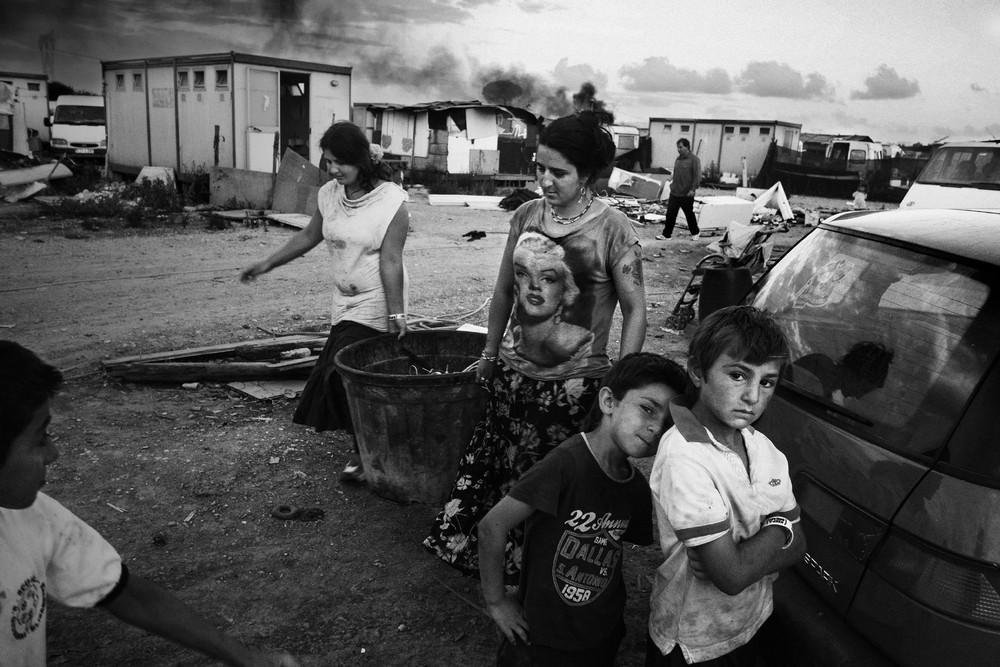 Giugliano, Italy. October 2014. A view inside a Roma camp next to a toxic waste site. 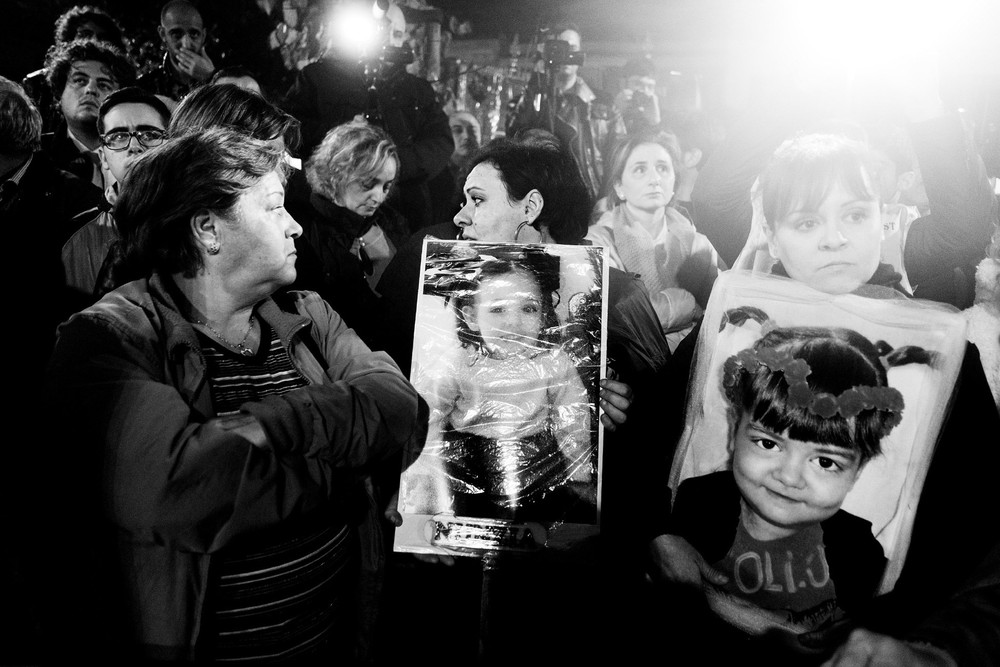 Casal di Principe, Caserta, Dec 2014: A group of mothers are showing up the images of their kids died by cancer at the end of a rally organised against government denial and indifference. 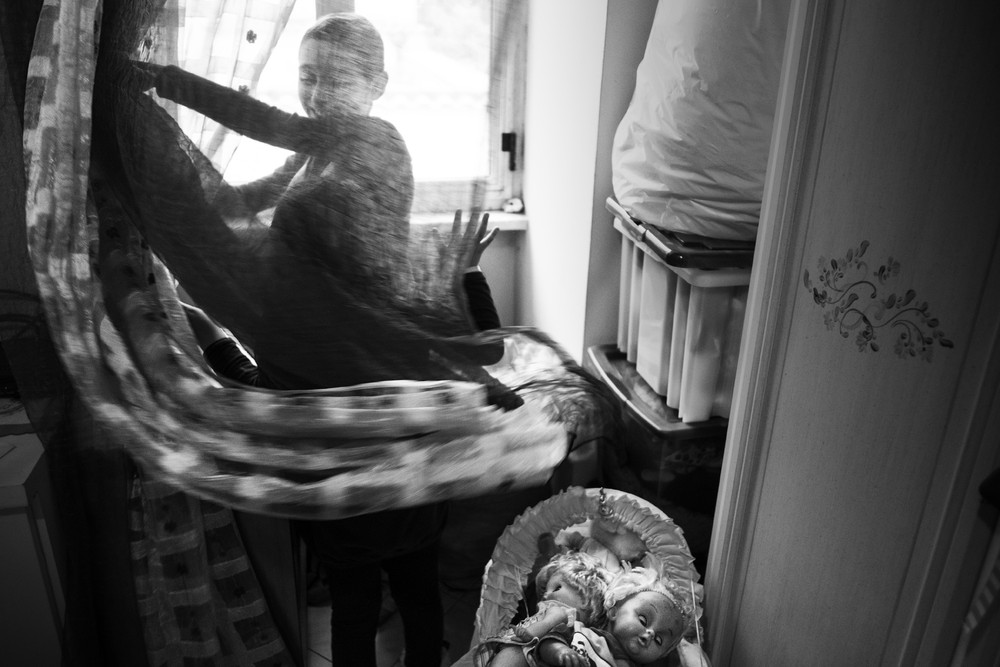 Boscotrecase, Italy. March 2015. Flavia, 10, playing behind her bedroom curtains with her sister. Flavia, who lives close to a toxic waste dumping site, was given a diagnosis of leukemia last year. 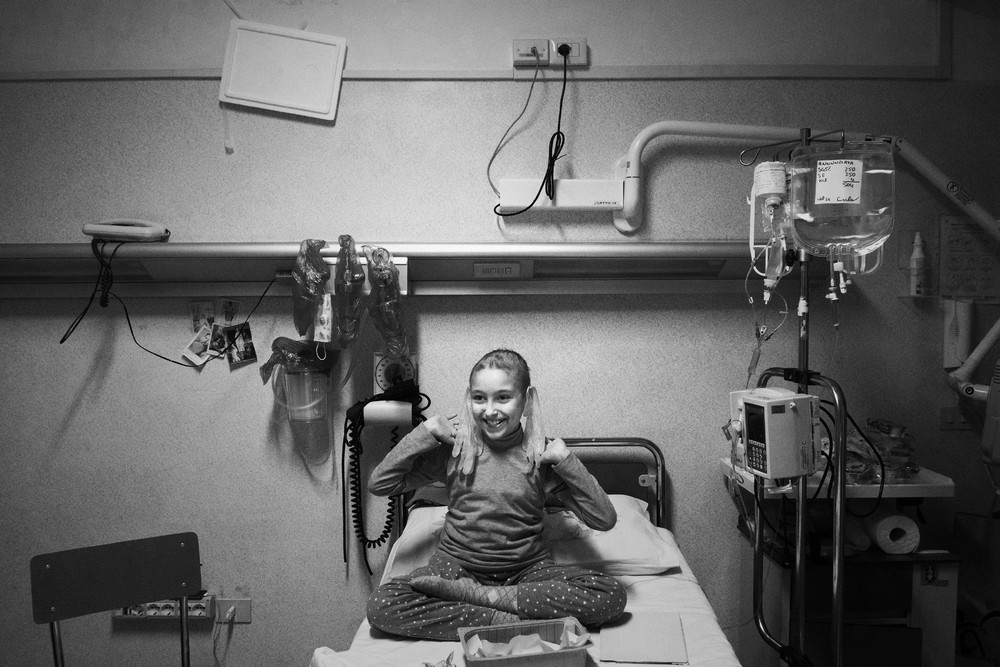 Boscotrecase, Mar 2015: Flavia is playing with some nurses tools at Pausillipon Hospital, where she gets chemotherapy treatments. She was diagnosed with Leuchemia at age of 9 at her birthday and had chem therapy treatments for about a year. she is now continuing the therapy at home.

Giugliano, Feb 2016: A toxic Landfill leaking biogas from the underground in the surroundings. 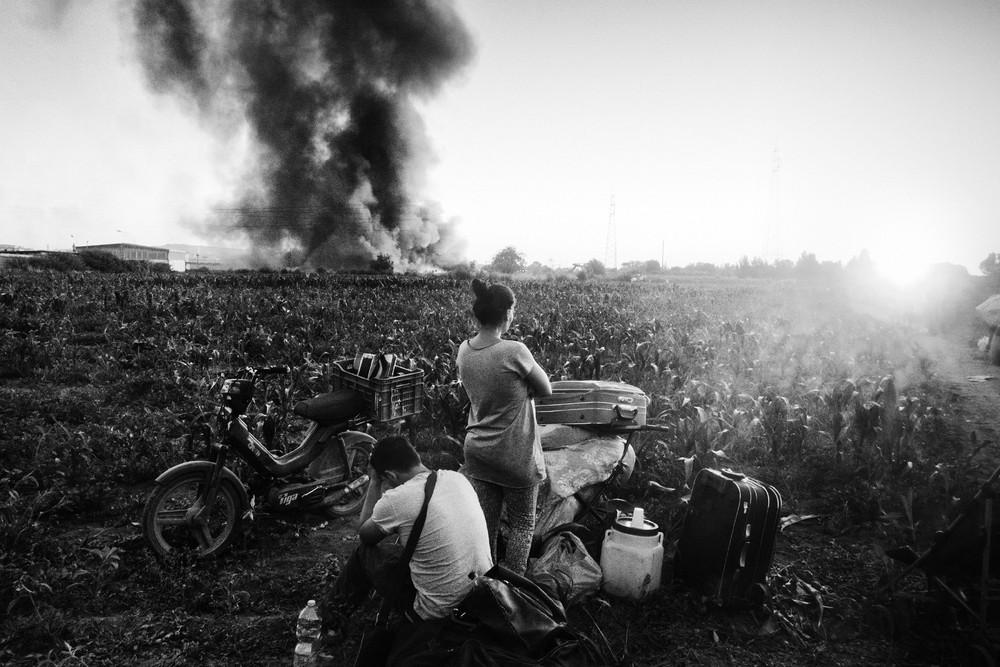 Naples, July 2016: Gipsy people resideing in the Naples surroundings are looking at the smoke column coming from their burning Roma camp. Witnesses said that two people on a land rover started the fire. 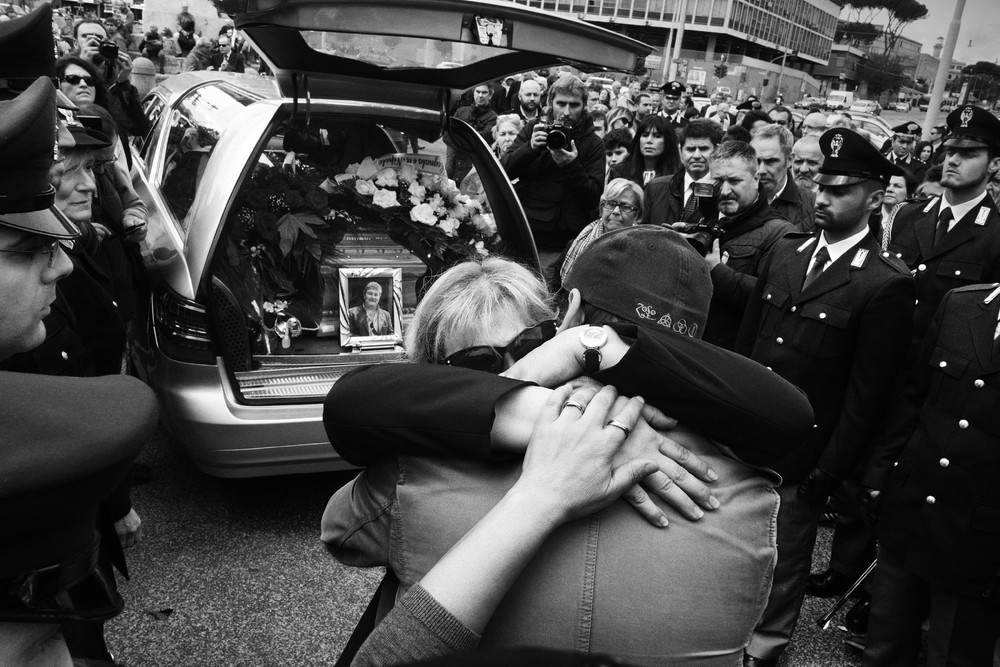 Rome, May 2014: Roberto Mancini whife hugging one of her friends in front of their loved one coffin. Roberto was a policeman on the frontline against the trading of toxic waste in Campania region. As a result of the years passed investigating about toxic waste on suspected sites he got cancer and died after a 5 years battle for life laving a wife and a daughter. 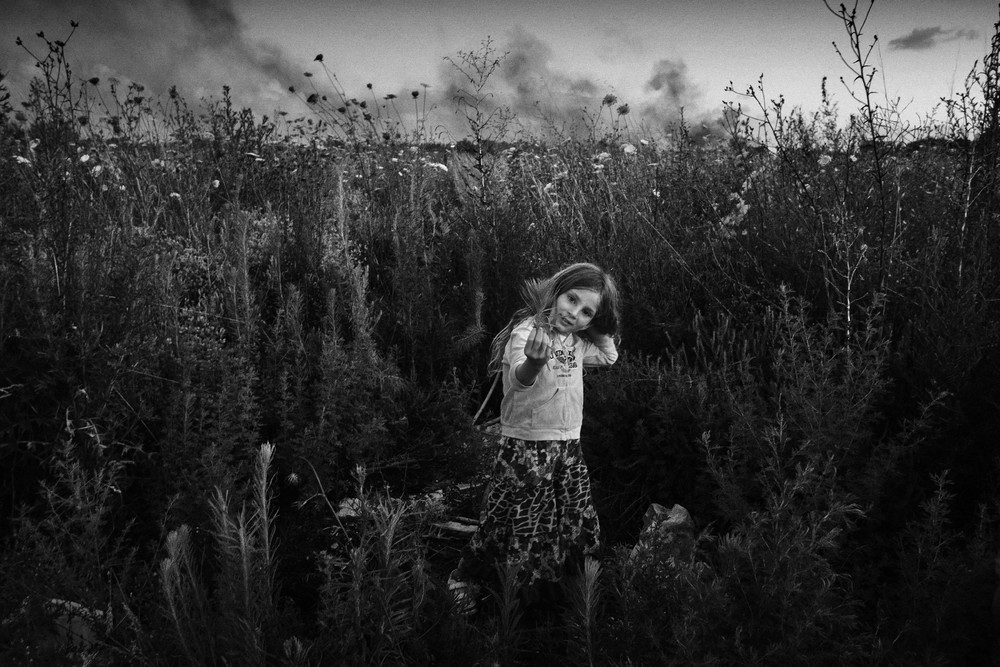 Giugliano, Italy. October 2014. A gipsy girl is playing in a Roma camp located next to a toxic waste site.

It was only by chance that in 2003, while attending a degree course at the Sapienza University in Rome, he discovered his interest in photography. Two years later he was represented by the Grazia Neri agency before joining AgenceVU in 2008.

He works as a photojournalist for the most prestigious international publications, such as National Geographic Magazine or TIME, and as a documentary photographer interested in social and geopolitical dynamics. He is best known for his important project on the consequences of Pakistan’s involvement in the war on terror.
It is from here that he works with the support of the Carmignac Foundation on the subject of his first book, Lashkars.

Berruti has won numerous awards including the Joop Swart Masterclass, 2 World Press Photo Awards and 3 Pictures of the Year International, a Visa d’Or Award, the Magnum Foundation EF, the Carmignac Photojournalism Award and the Fellowship to the W. Eugene Smith Award, among many others.

His work has been exhibited at major international festivals such as VISA POUR L’IMAGE and Arles and his images are a permanent part of the Carmignac collection and the MAXXI museum in Rome.

In 2017 he left AgenceVU to start a new path as one of the founding members of MAPS, a Brussels-based collective that brings together an important number of internationally renowned photographers and creatives.