They live in abandoned buildings, dismantled factories and old out-of- town houses without windows, water or electricity. They find shelter in tents and shacks built with wooden poles, ropes and plastic sheets in what are usually called “jungles,” spontaneous makeshift camps set up in the woods near the Bosnian-Croatian border. They are mainly young people between the ages of 18 and 35, coming from countries with high internal conflicts such as Pakistan and Afghanistan living along the 100 km of road that separates Bihac from Velika Kladusa, the two largest cities in northern Bosnia. In this part of the country, the canton of Una Sana, the number of people crossing the border to reach Europe has grown exponentially since 2016.The routes leading to Croatia and crossings can last for days and almost all of them end with violent pushbacks by the Croatian police and people are forced to go back, often with heavy marks on their bodies, without money and with broken cell phones. But according to the Danish Refugee Council in 2020, there are about 21 thousand people who were pushed back from Croatia to Bosnia and 9 thousand who managed to get to Slovenia and were returned to Croatia. And finally, once they entered Italy, were brought back by bus to Slovenia and from there transferred to Croatia and back to Bosnia. It is called the ‘pushbacks chain’.

The multi-layered European border has made the passage more and more difficult and the living conditions of people left in Bosnia are getting worse day by day. One of the most significant situation is the one of Lipa camp, built in April 2020 to cope with the covid emergency and destroyed in December 2020 due to a fire. The people in transit who are still there, are living in inhumane conditions in overcrowded tents and without essential services, and with winter temperatures below zero, surviving becomes more and more of a daily challenge. – This photographs were taken between December 2019 and October 2021 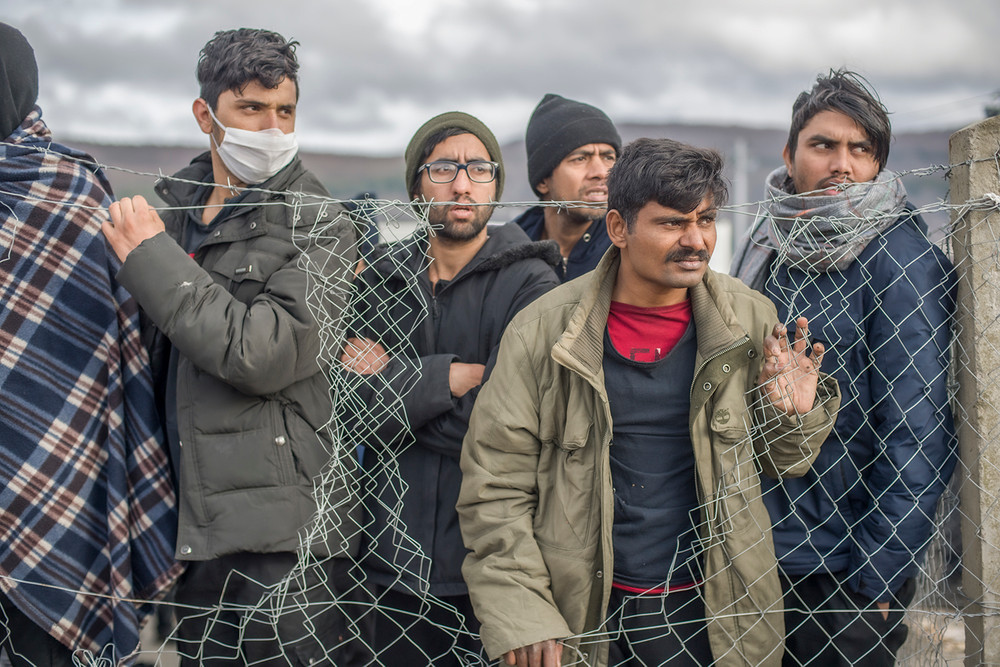 Waiting for future
A group of migrants watch from the barbed wire fence of Lipa Camp. In the first days of the year, there were many protests and tensions with Bosnian security forces. Lipa Camp, 04.01.2021 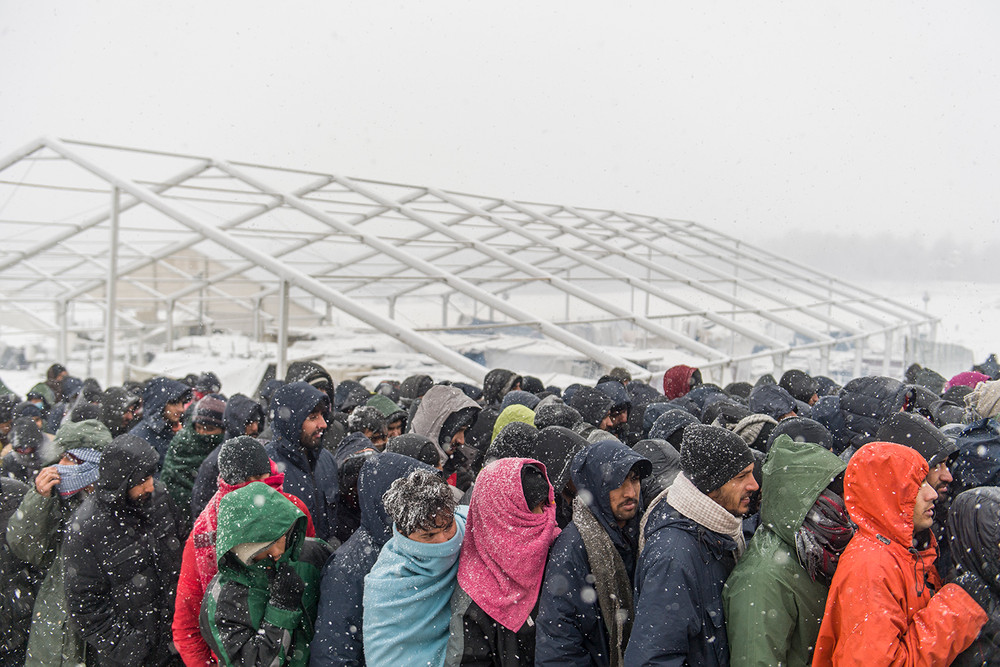 A line for the food
The long line under the snow for the distribution of the only daily meal at Lipa camp by a Red Cross team. After the fire on 23 December and the protests in Bihac against the reopening of Bira camp, migrant people were forced to stay in Lipa without any kind of assistance or basic services. Lipa Camp, 08.01.2021 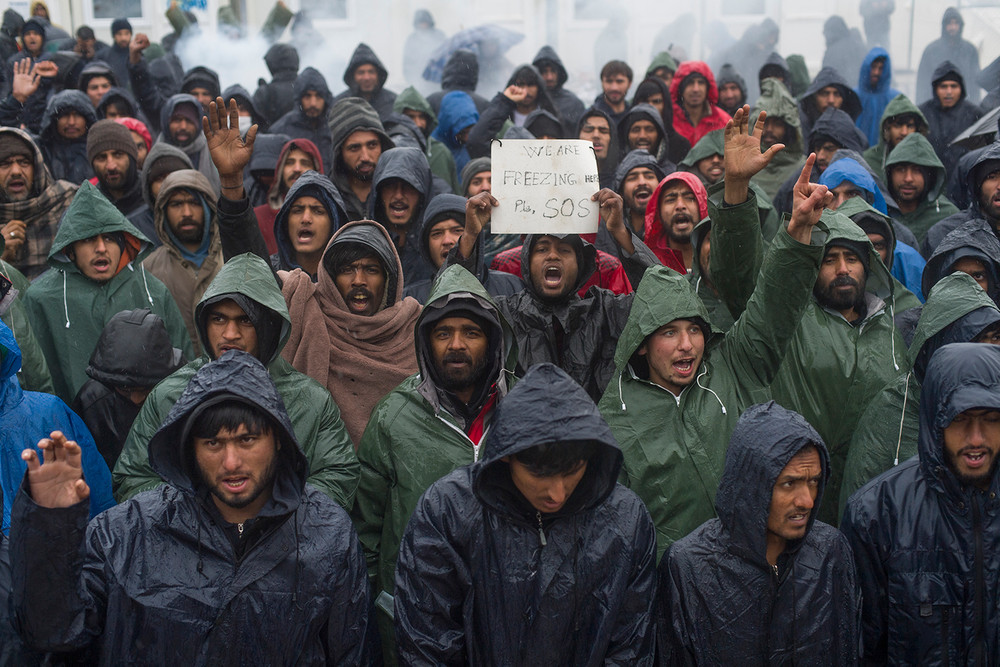 We are freezing
The protest of migrants living inside the Lipa camp against the inhumane conditions in which they are forced to live. Some have started a hunger strike, to demand a dignified solution and the respect of human rights. Lipa camp, 03.01.2021 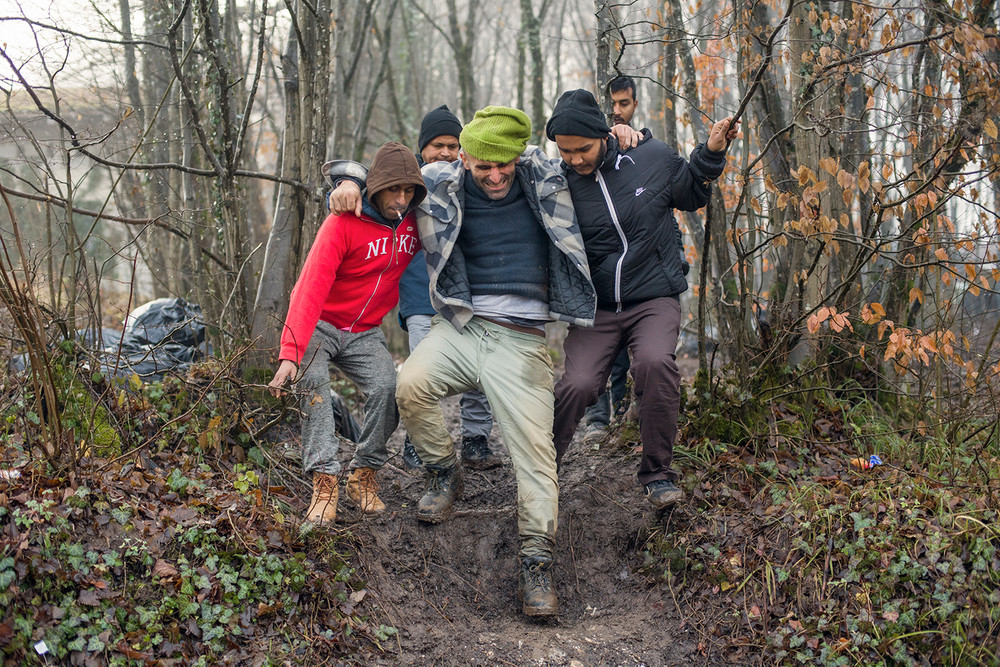 Solidarity
Nasrullah (center) is 37 years old and originally from Iran. When he arrived at the jungle of Velika Kladusa limping, he had just been rejected by Croatian police, beaten and left in the middle of the woods near the Bosnian border. The Bangladeshi boys fed and comforted him, and helped him get to Miral camp to be seen by a doctor. Nasrullah is one of the many, too many daily pushbacks. Velika Kladusa, 06.01.2021 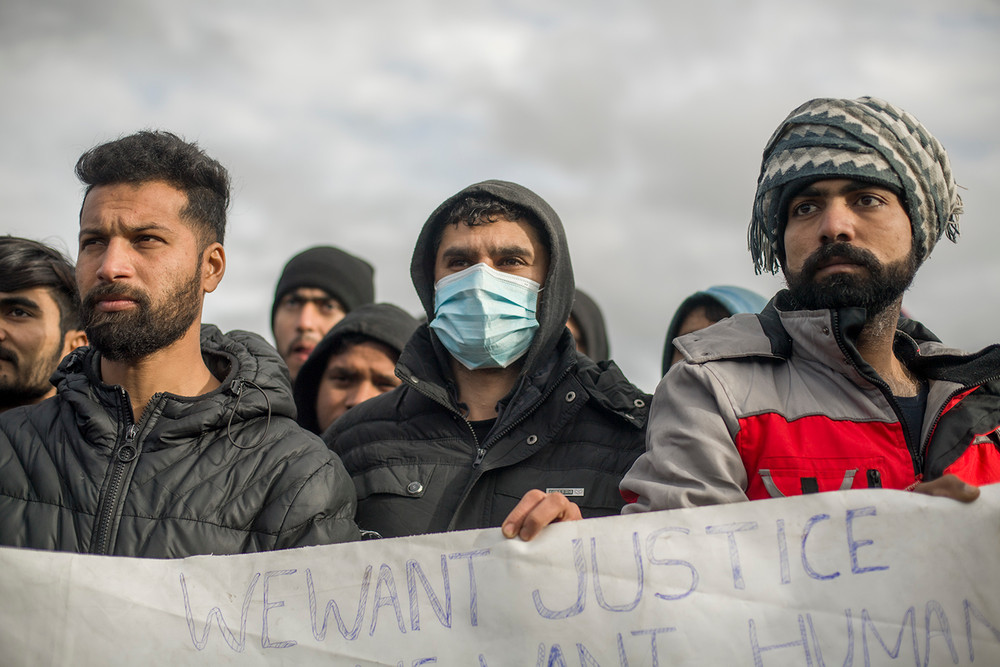 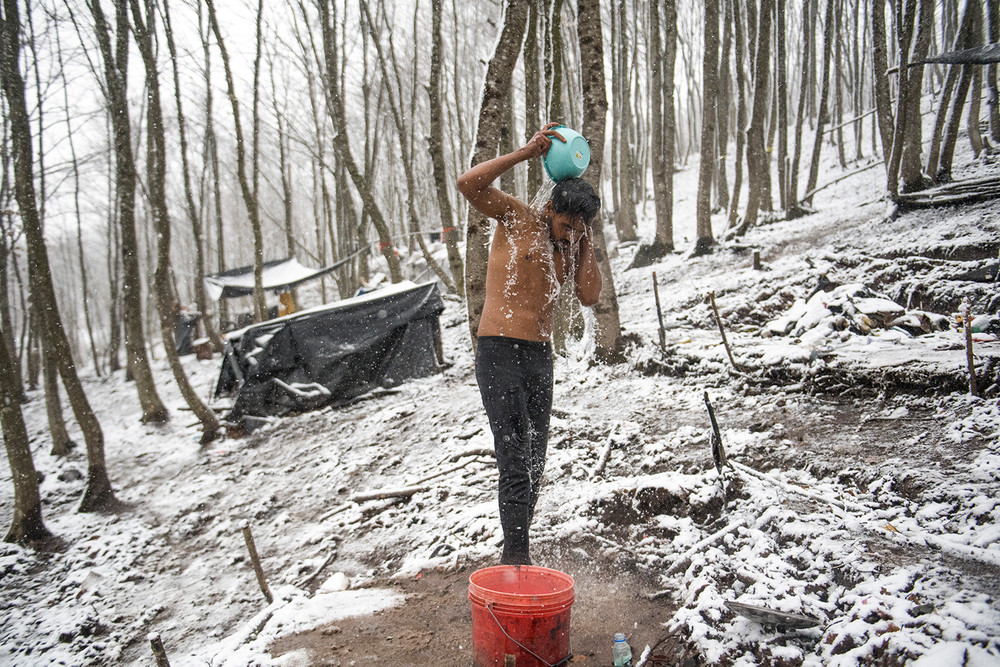 Shower and snow
Sumon is 22 years old and from Bangladesh. He started studying Political Science in Istanbul, but there he made the decision to leave, encouraged by advice and hope. He left in 2019 and has been in Bosnia for 5 months after 4 pushbacks by Croatian police. His wish is to finish his studies, then it will be seen. The Bosnian winter increases the precarious living conditions of the thousands of people trying to reach Europe. Velika Kladusa, 10.01.2021 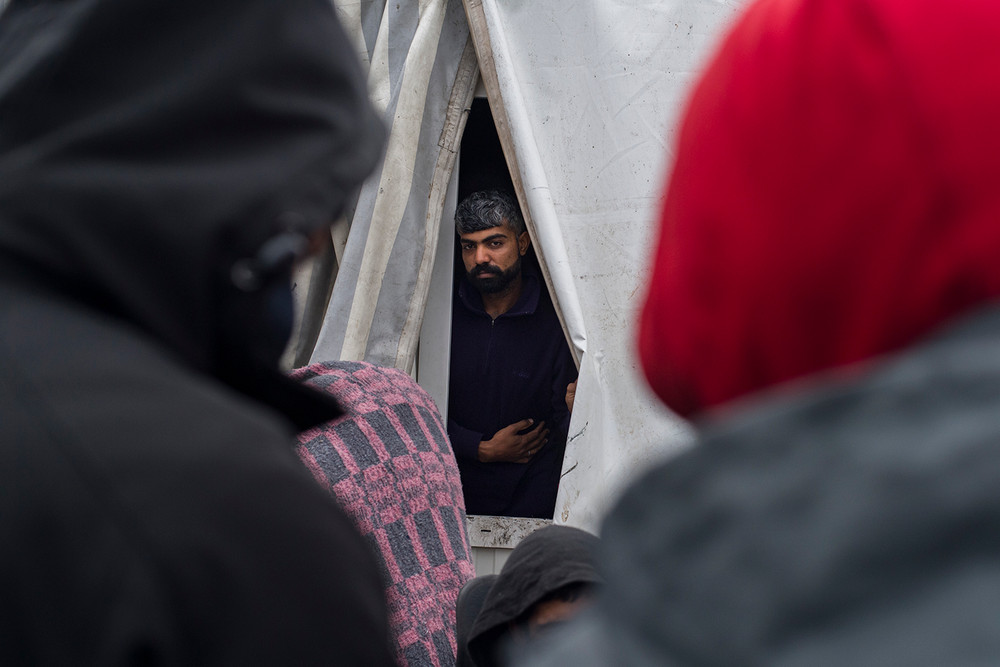 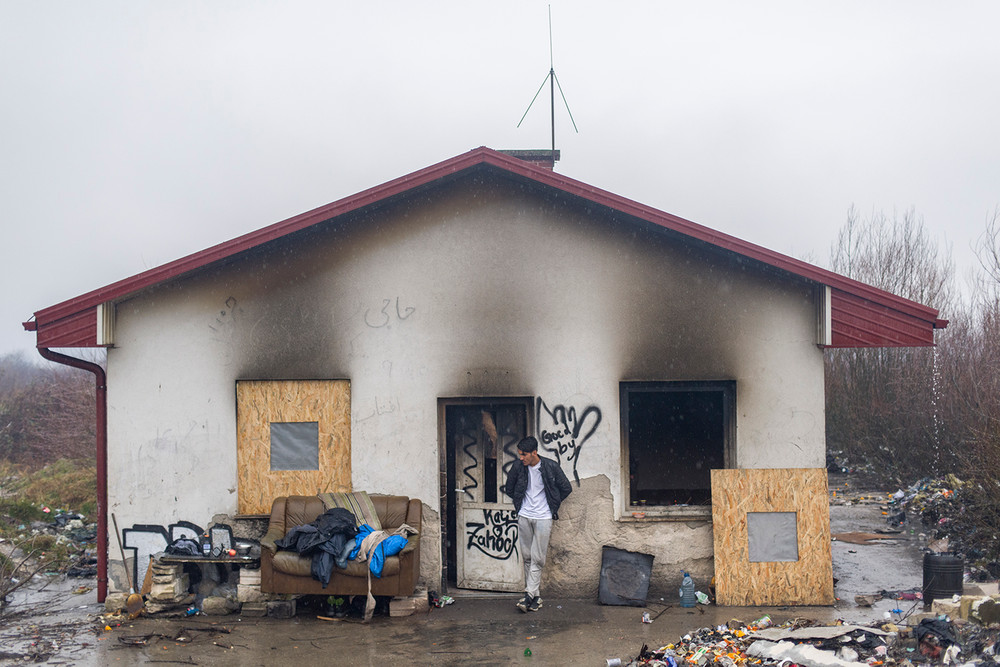 A place called home
The outside of an abandoned house few kilometers outside the city of Bihac, where ten boys from Pakistan and Afghanistan have found shelter.They are waiting for better weather conditions so they can try to cross the border again. Bihac, 03.01.2021 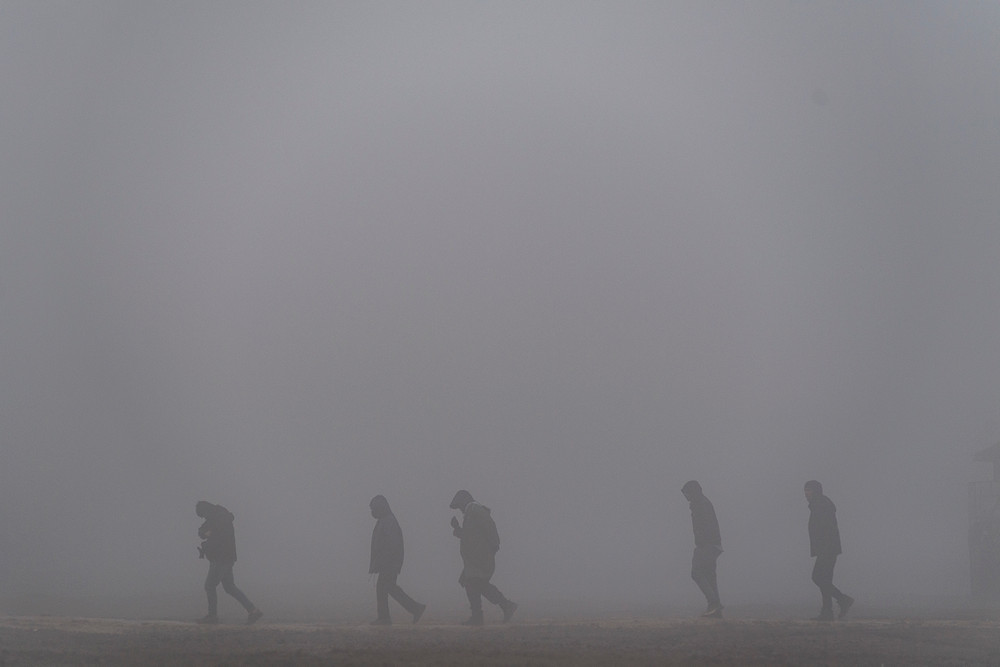 People on the move
A group of migrants walk just outside the Lipa camp, built in April in an isolated area 30 km from the city of Bihac. Lipa Camp, 03.01.2021 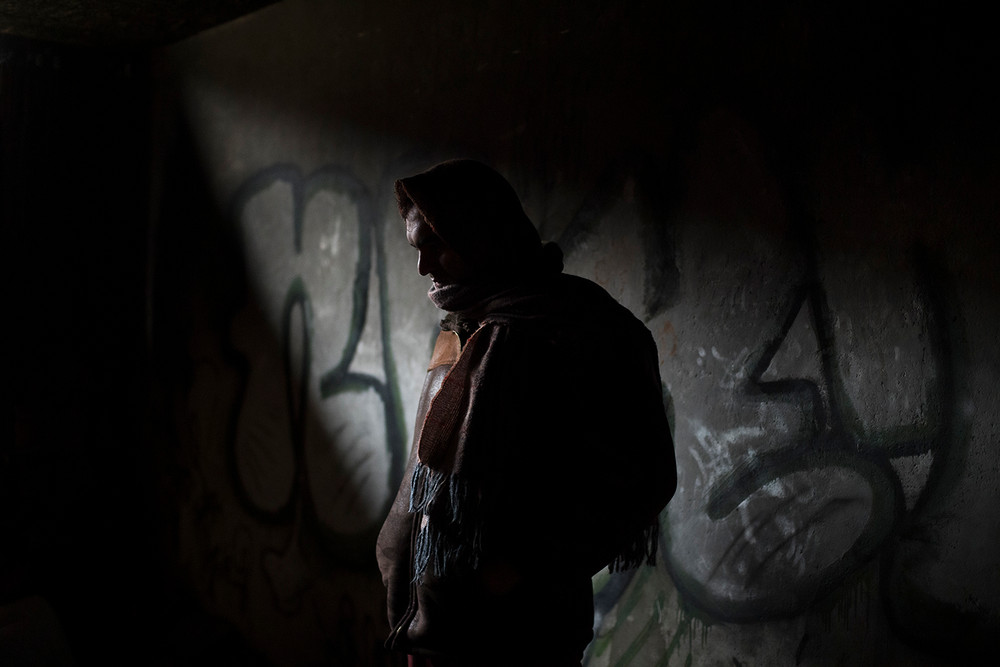 Inside a squat
A man from Pakistan rest inside the large abandoned building along the Una River in Bihac where lived almost two hudrends people. 04.01.2021 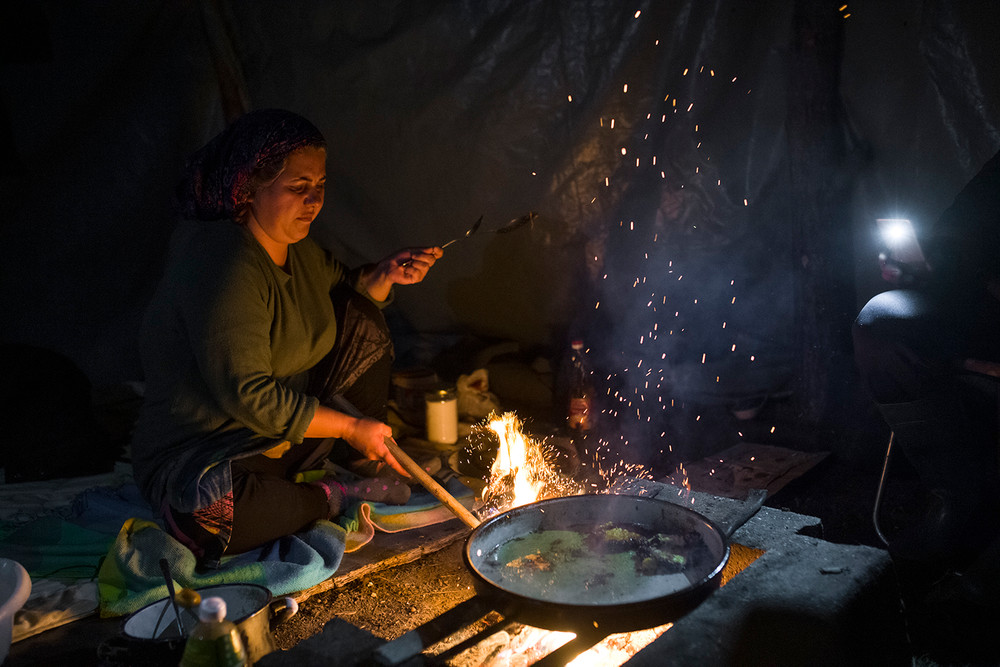 Cooking for people
An Afghan woman cooks inside her tent in the jungle of Velika Kladusa. About 200 people live in this informal camp in an attempt to cross the border into Croatia. Velika Kladusa 22.10.2021 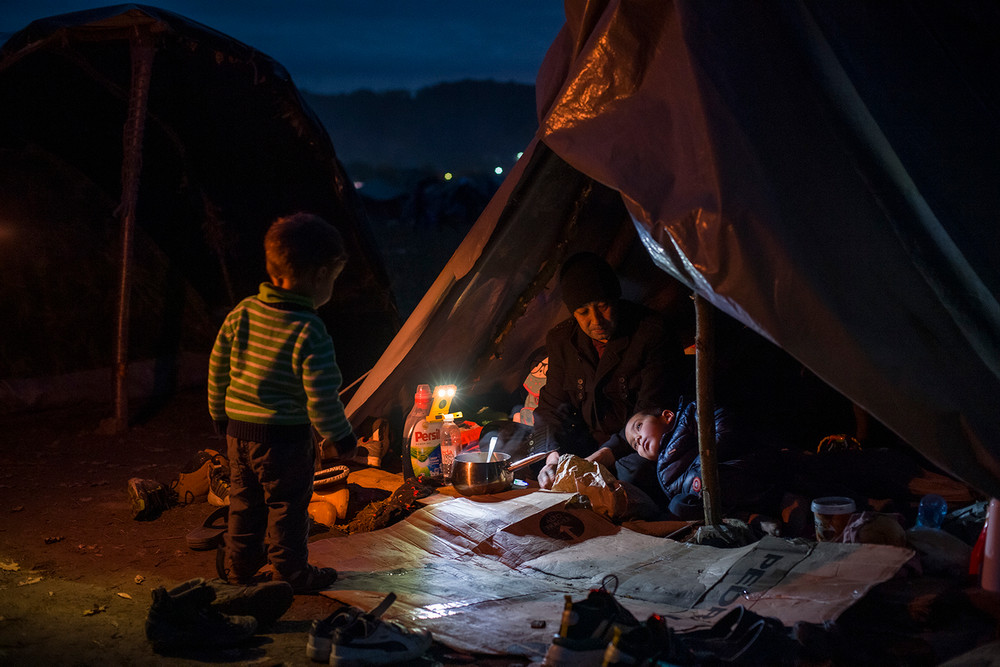 Night time
An Afghan family has just finished eating and is preparing to go to sleep in the informal camp in Velika Kladusa, on the border with Croatia. Velika Kladura, 23.10.2021 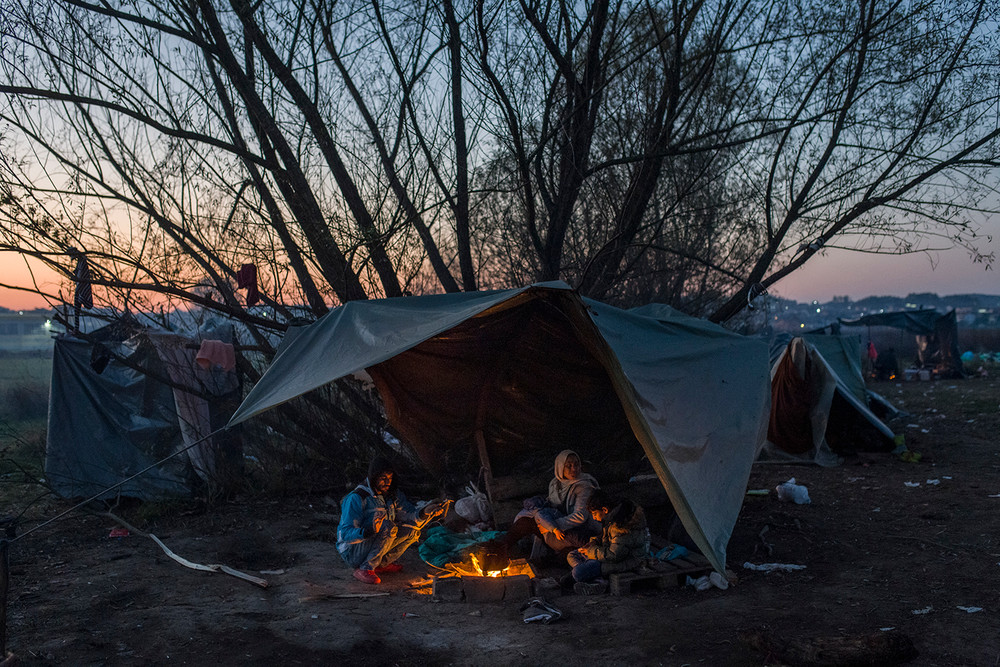 Warm up
An Afghan family warms themselves by the fire in the jungle of Velika Kladusa. There are many families living in this informal camp who are continually pusheb back by Croatian and Slovenian police as they try to reach Europe. Velika Kladusa, 27.10.2021 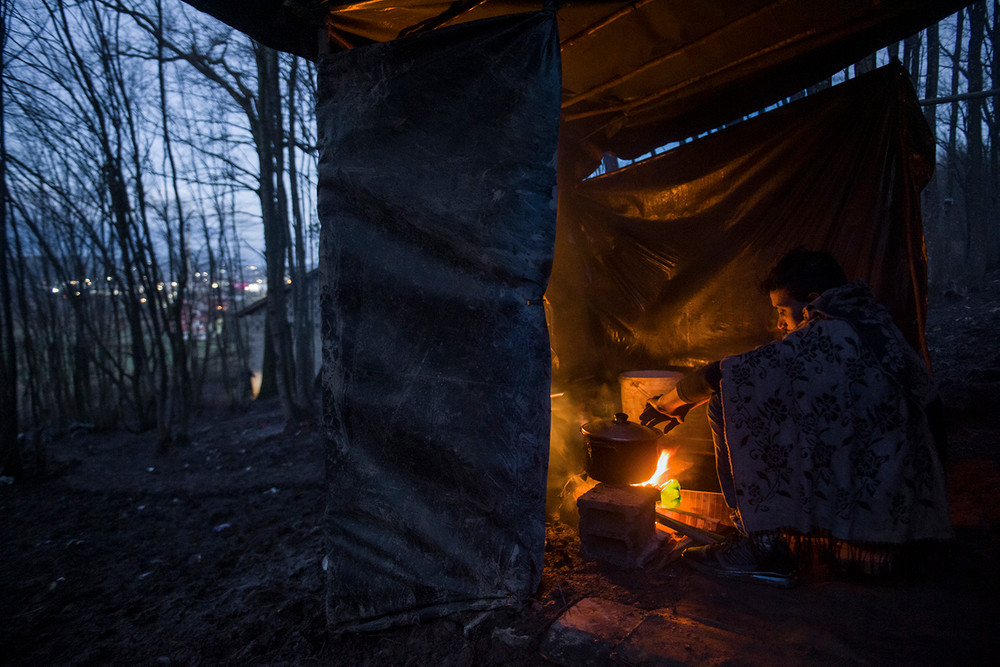 Jungle
Husen, 40 years old, from Bangladesh, prepares dinner in the “jungle” of Velika Kladusa. He has been in Bosnia for 4 mon- ths and has been rejected 3 times. Waiting for spring he lives in a tent with 3 other people. Velika Kladusa, 06.01.2021 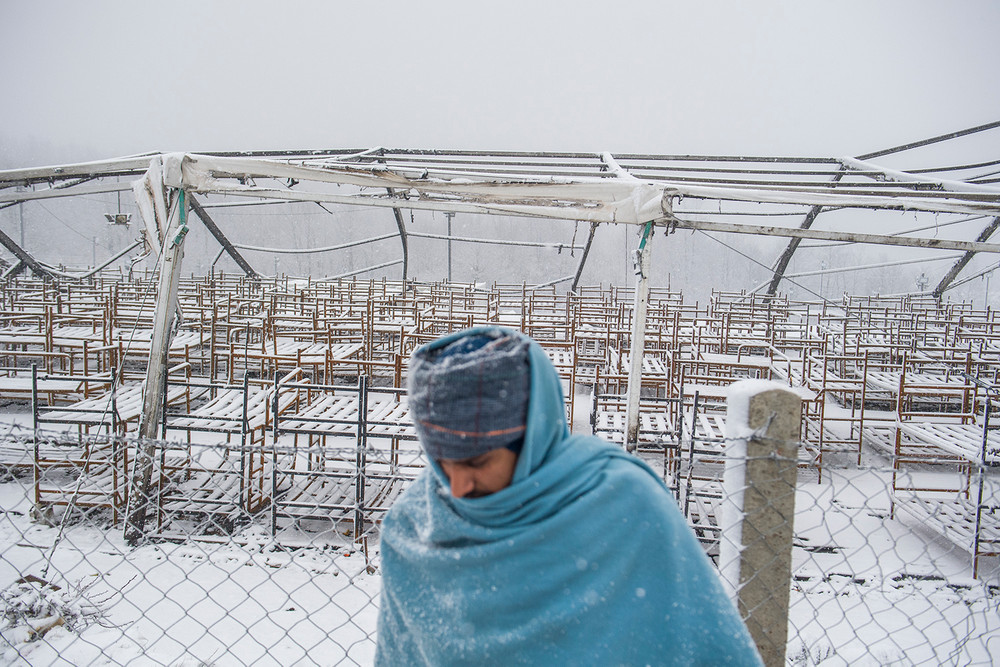 The burned Lipa
A Pakistani boy walks under the snow in front of what remains of the Lipa camp after the fire on December 23, 2020. Despite the destruction of much of the camp, a thousand people still live there. Camp Lipa, 06.01.2021 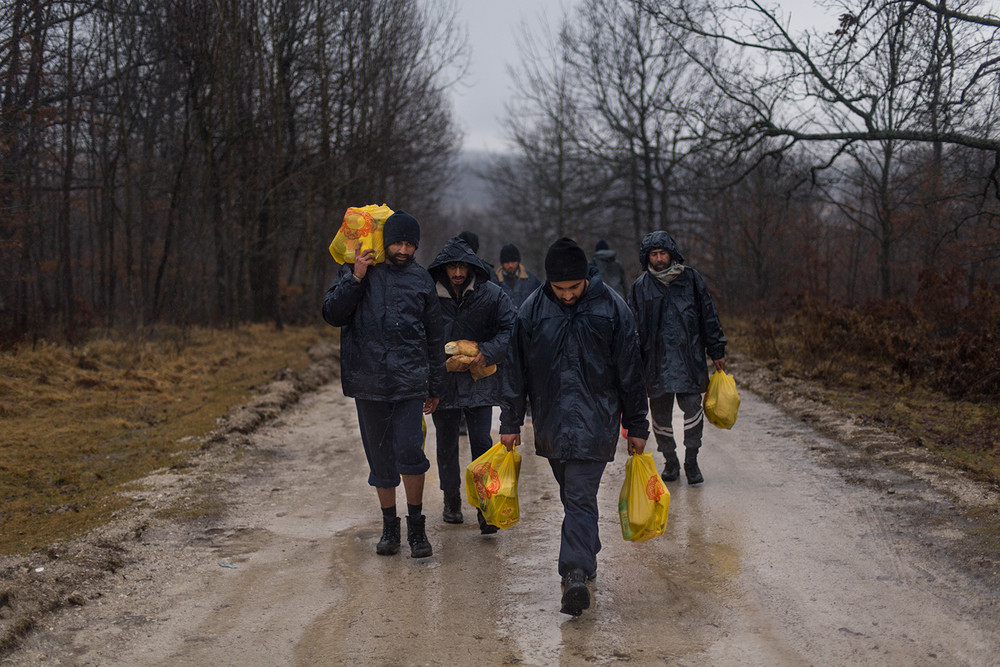 Food and rain
A group of migrants return from a distribution of comfort supplies not far from Lipa camp. After the fire on December 23, the IOM ceased operations inside and people were left without food and assistance. Lipa, 03.01.2021 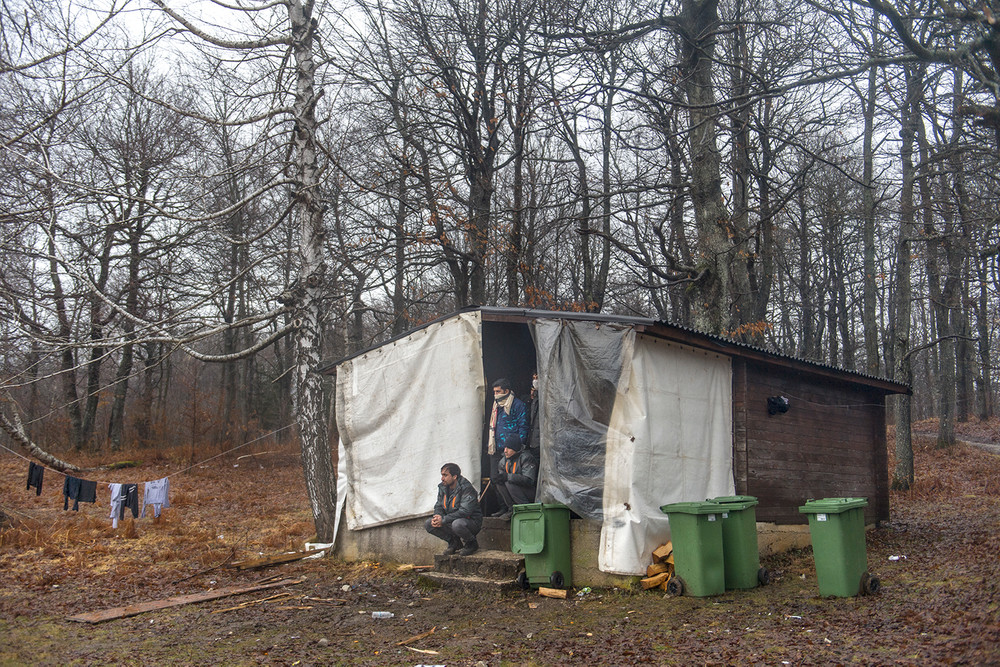 Shelter in Lipa
An abandoned house has become a shelter for a group of migrants from Pakistan. After the fire in Lipa camp, many have been seeking an alternative solution to survive the cold Bosnian winter. Lipa, 03.01.2021 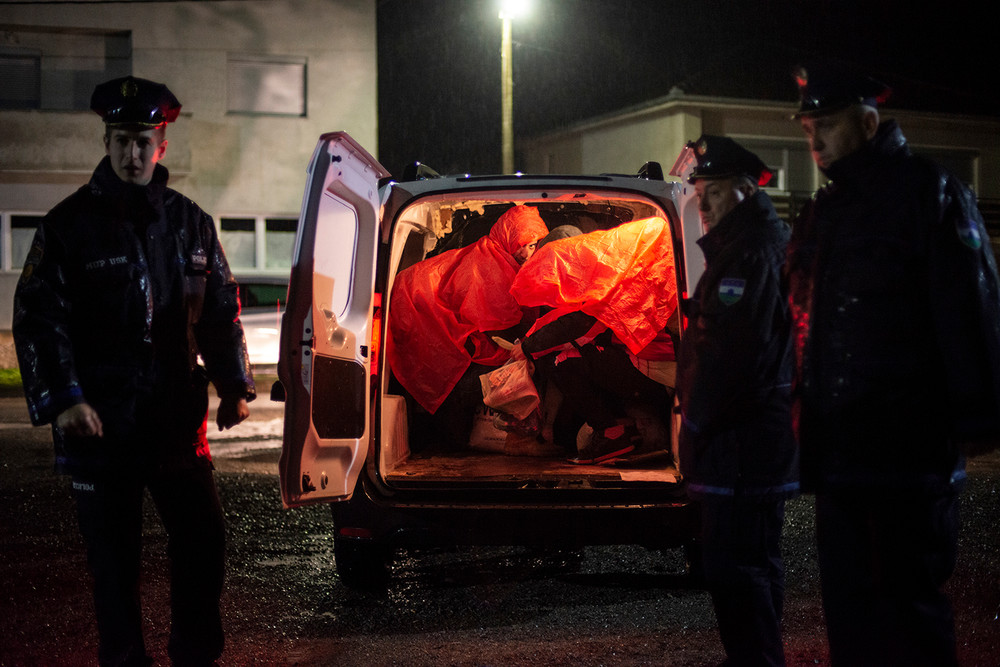 Derportation
A group of migrants stays crammed inside a small van after being taken off a train bound to the town of Bihac by Bosnian police in Bosanska Krupa, northwestern Bosnia. In the little village of Bosanska Krupa, almost every night the Bosnian Police get on the train to search migrants and take them into vans. Bosanska Krupa, 13.12.2019 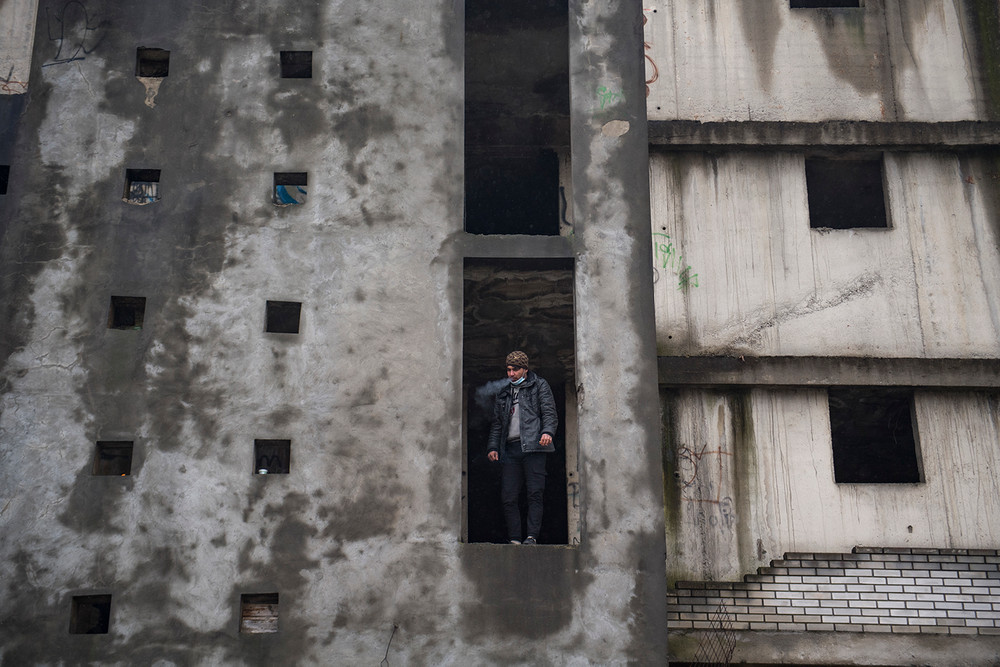 Squat in Bihac
A Pakistani boy looks out over the large abandoned building along the Una River, where nearly 200 migrants live. Bihac, 04.01.2021 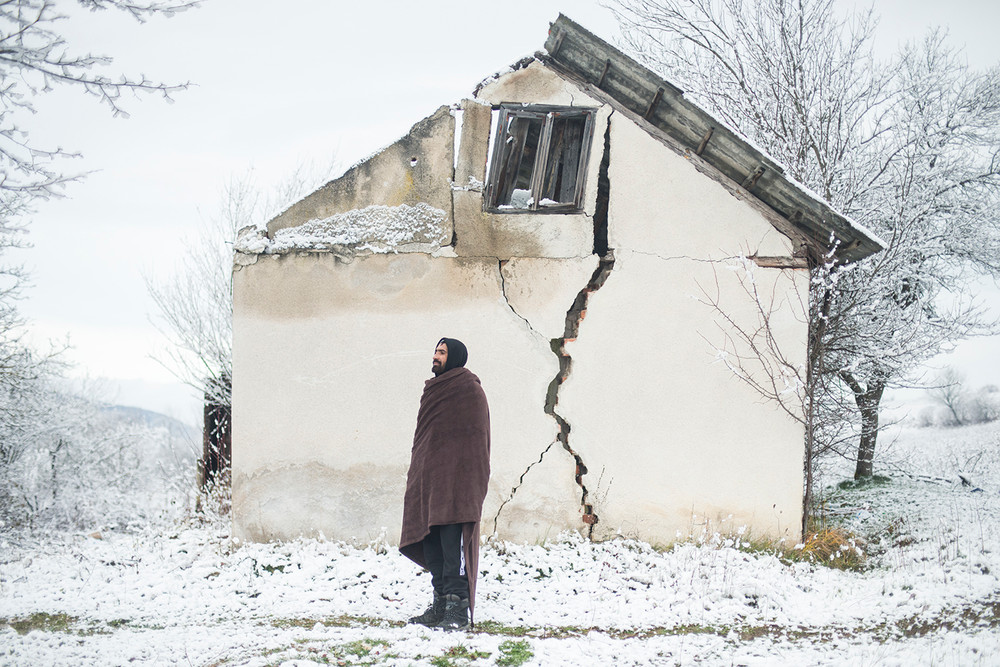 Broken
Seyed, 25, a house painter from Pakistan, stand outside his temporary house where he has been living for 3 months. He has been pushed back 6 times from the Croatian Police. Sturlic, 13.12.2019

Michele Lapini is a 83 class freelance photographer. Born in Valdarno in Tuscany, he studied Development Economics and International Cooperation first in Florence and then in Bologna. His photographic work intersects with his interest in the social, environmental and political issues that characterize today’s world. He has worked in cities such as London, Barcelona, ​​collaborating with cultural and music festivals. He lives and works in Bologna covering the news for “La Repubblica Bologna” and his photographs have been published in Internazionale (IT), The Guardian (UK), Corriere della Sera (IT), Pagina99 (IT), L’Unità (IT ), Repubblica.it (IT), Latinoamerica (IT), Terre di Mezzo (IT), E – ilmensile.it (IT), Rai Uno (IT), etc. He is one of the photographers of the book “Genuino Clandestino” released in March 2015 with TerraNuova Edizioni.