A decade of war and destruction for freedom

In the wake of the “Arab Spring” that spread to the Middle East in 2010, the Syrian regime prepared for the possibility that the movement would come knocking on the doors of Damascus. As more and more Syrians took to the streets in the early days of 2011, chants for social and economic reforms rose across the country. The Assad regime wasted no time and deployed the army. Men, women and children were systematically arrested, tortured and killed, and as a result, small militias began to form in different parts of the country as calls for the overthrow of President Bashar al-Assad spread throughout Syria.

The Syrian revolution was born after eight years and lost more than half a million people, and the Syrian revolution entered a state of chaos, forcing millions of Syrians to flee their country and providing a fertile environment for the birth and sanctuary of the Islamic State in Syria and Iraq. The International Criminal Court has collected thousands of documents directly linking the Assad regime to war crimes. Despite this, the international community remains deadlocked and unable to mitigate the violence that the regime continues to inflict on its own people. While half a million Syrians were killed for freedom, which was not achieved after a full decade of war and conflict, the series that was taken between 2018 and 2020 illustrates what happened during the entire decade, as it illustrates a great contradiction between hope and pain. However, there are people who are persistently trying to confront the bitterness of this terrible war with their determination, their hope and their desire to live. This project illustrates the efforts of the civilian population after a decade of war for freedom 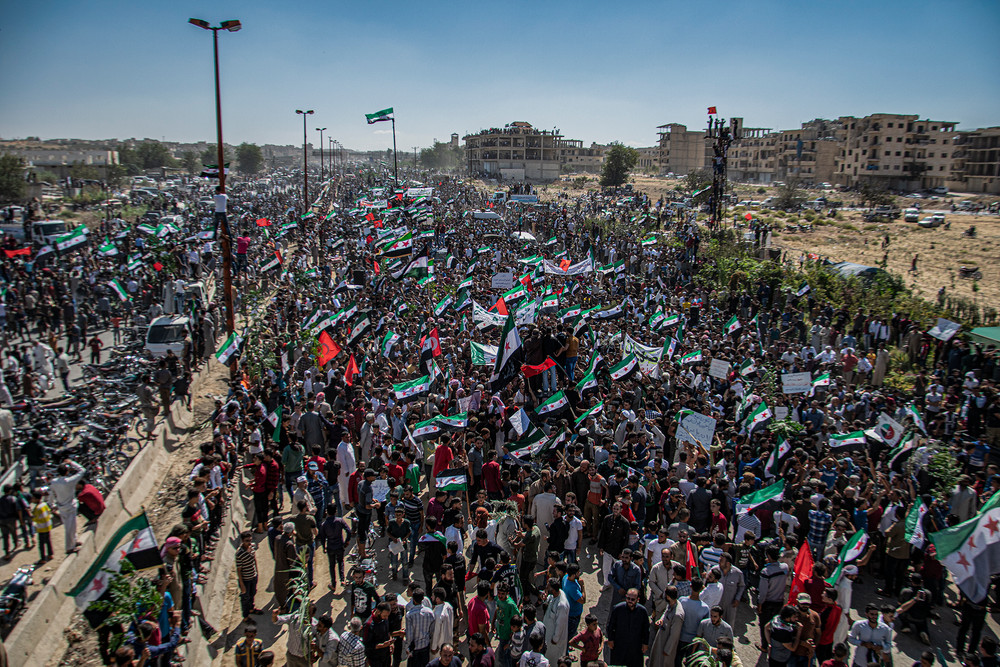 I Thousands of demonstrators in the city of Maarat al-Numan, chanting peaceful freedom, the people want the fall of the Syrian regime 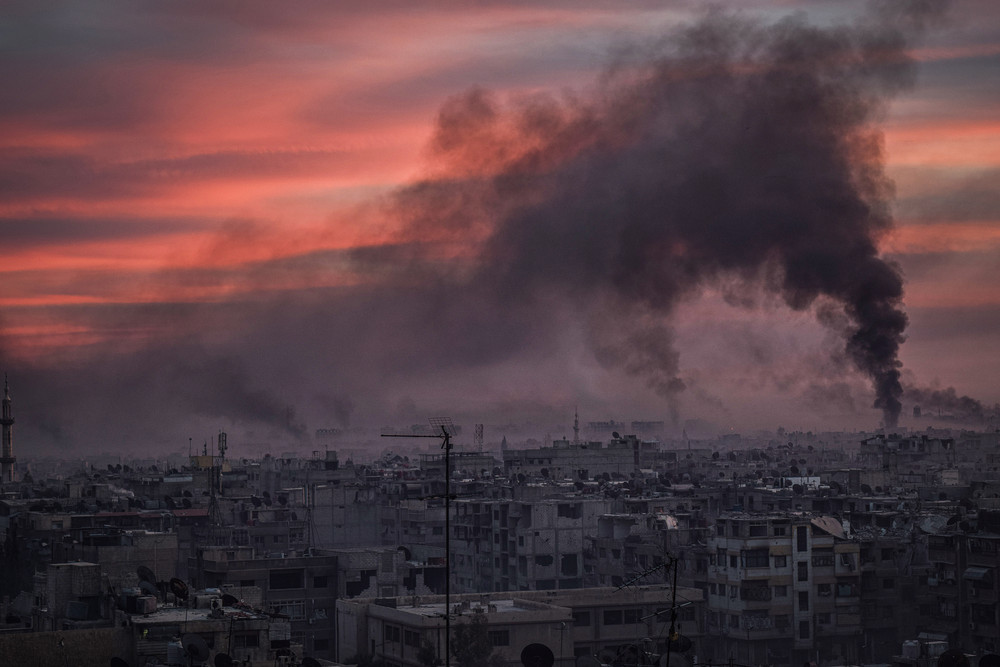 Smoke rising from all sides of the city after 80 air raids on the city in the countryside of Damascus, the city of Douma 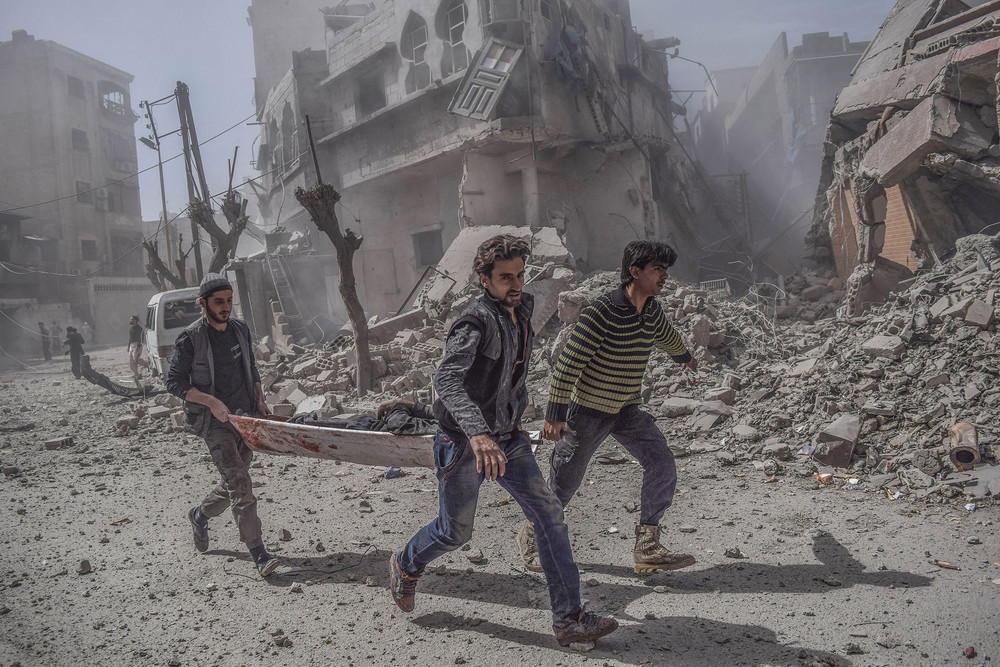 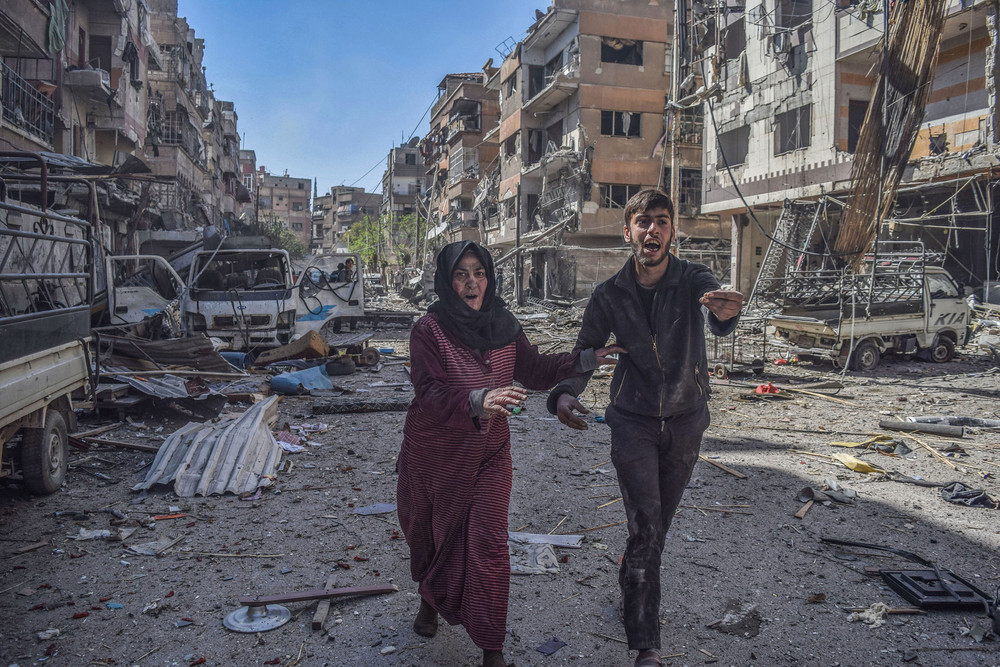 A mother screams very loudly after the killing of all her family members, except for a son next to her who is trying to gift her 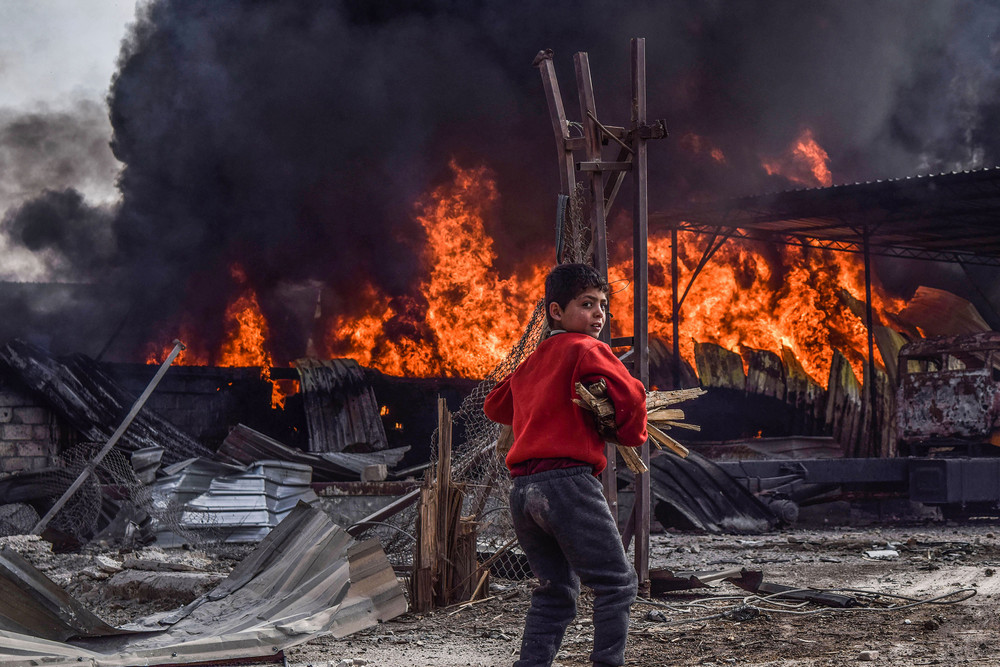 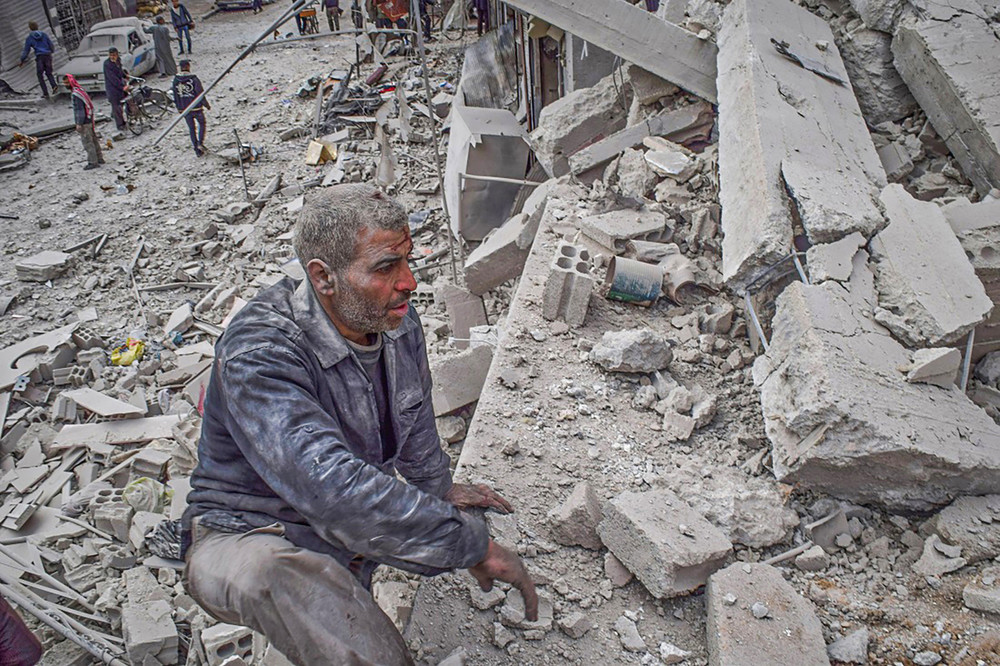 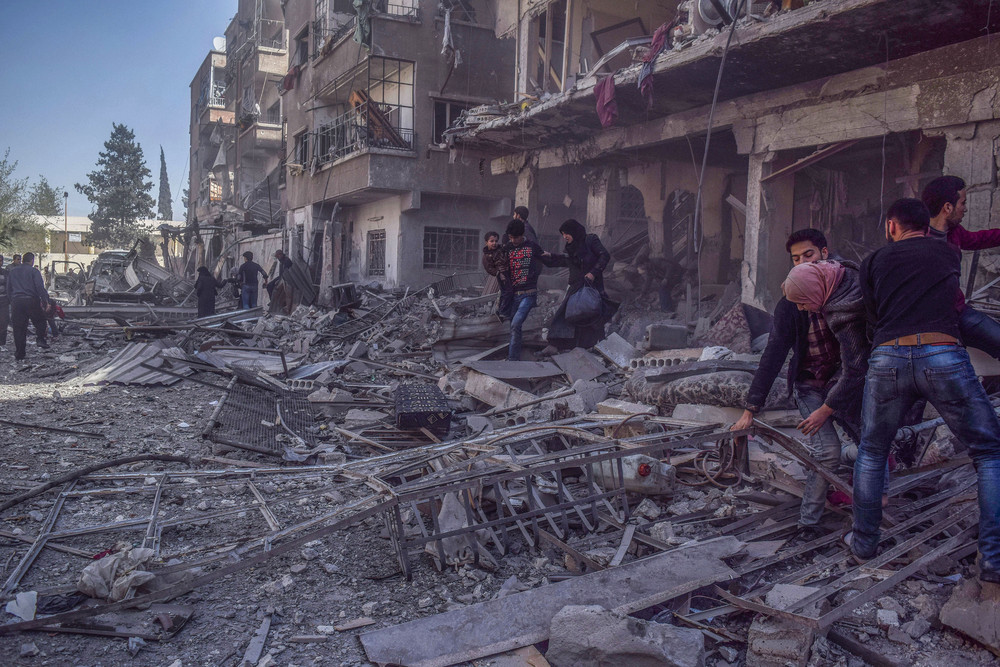 After double raids in the center of the city of Douma in the countryside of the Syrian capital, Damascus, families emerge from the rubble after 80 people were killed in the same place 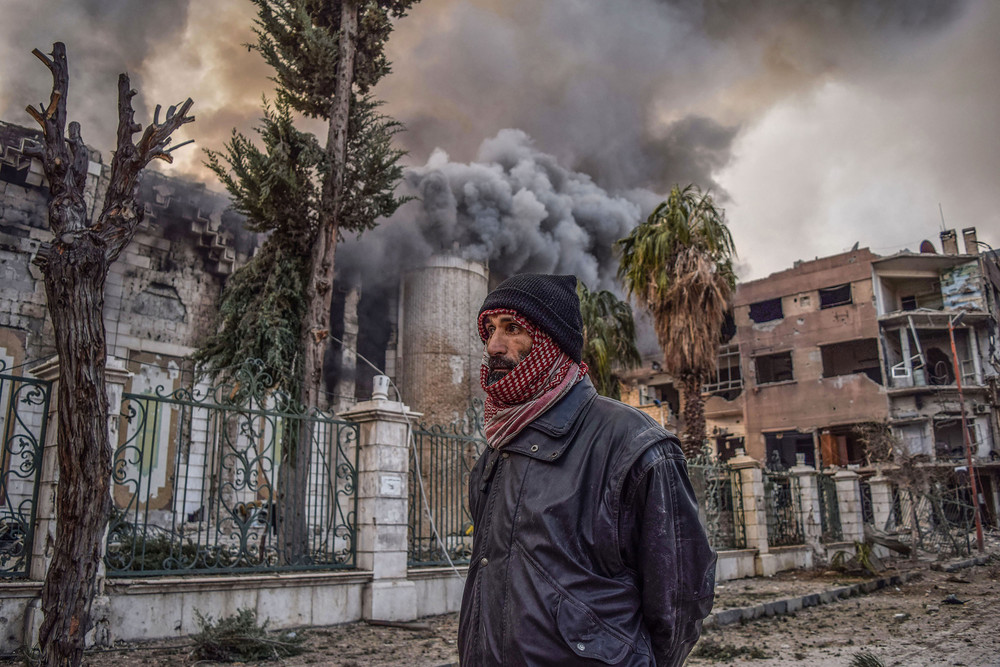 A man walks at the end of the day with rising smoke behind him after losing all his family members in the countryside of the Syrian capital, Damascus, Douma 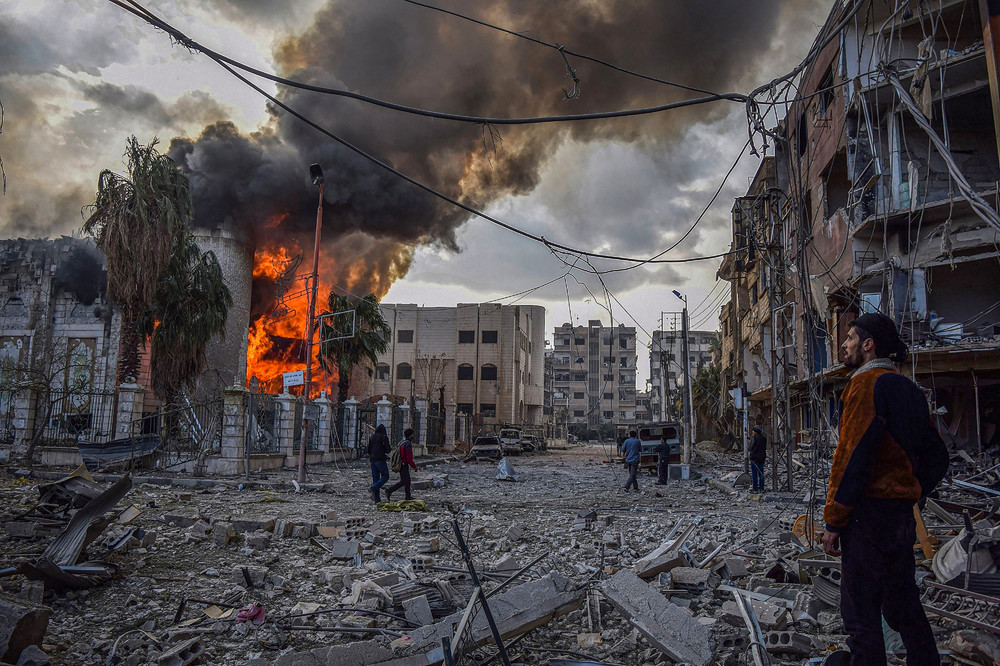 A man emerges from the underground basement as he looks at the archaeological site, the cultural center in Damascus countryside, as it burns after air strikes 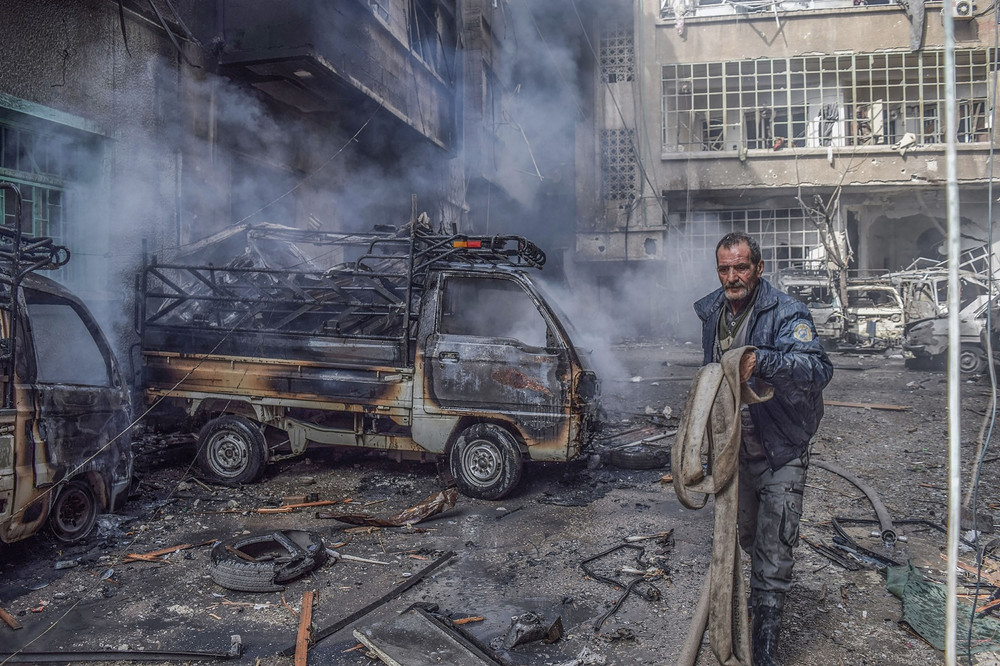 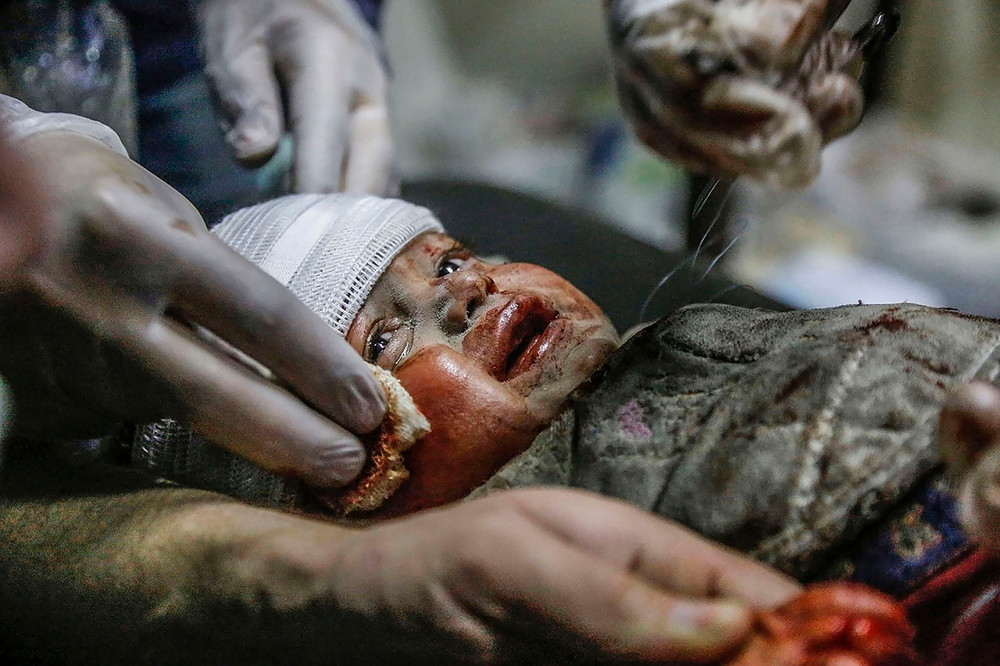 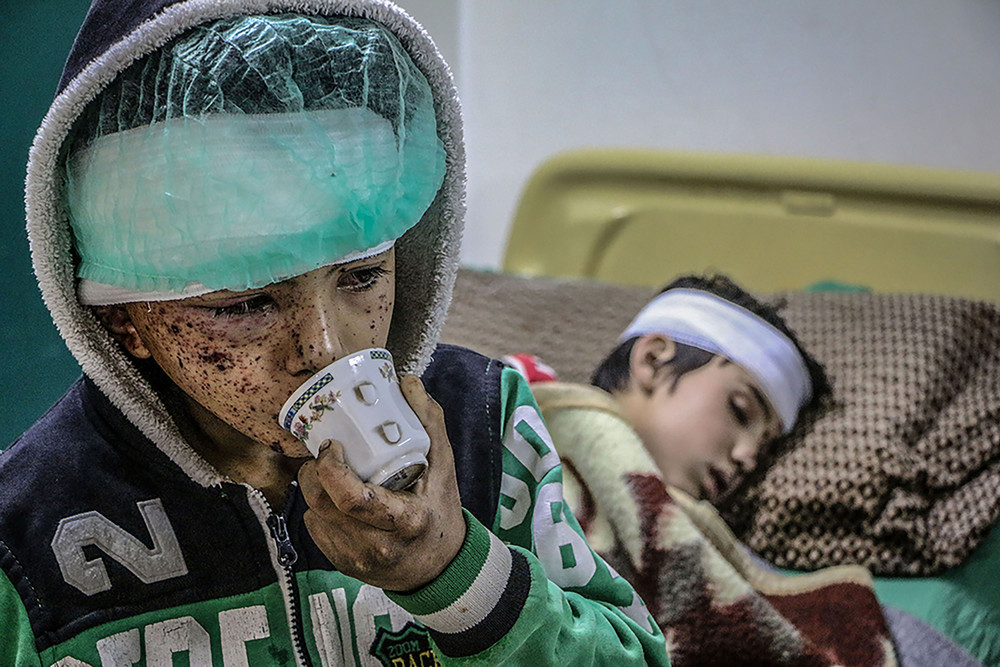 A child sits inside an underground medical point, with his brother behind him, seriously injured, after raids hit their house in the countryside of Damascus 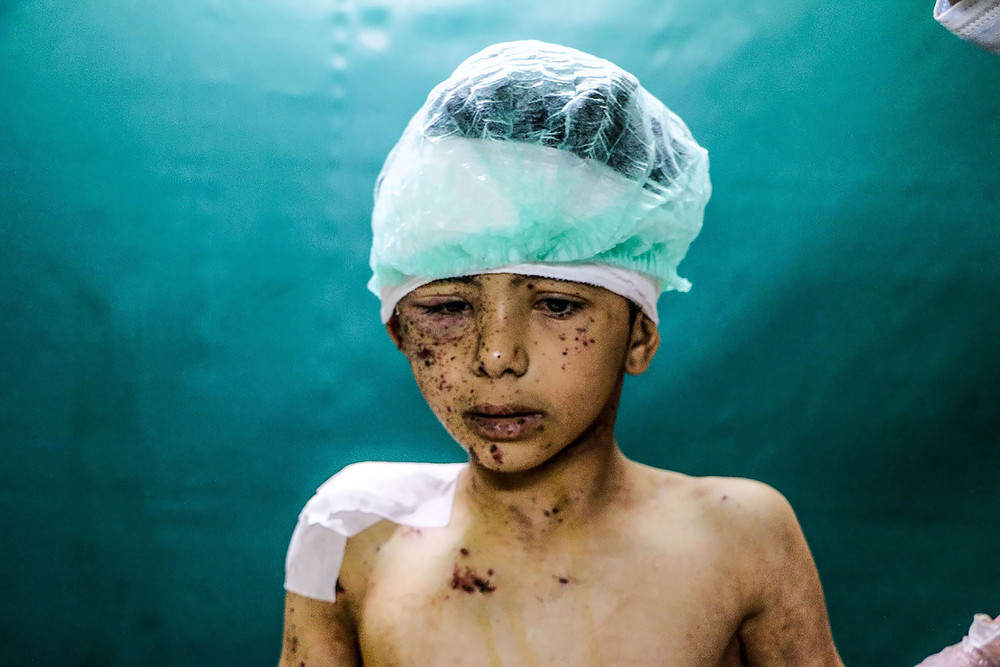 A child sits on a chair while receiving treatment in a difficult psychological condition after raids that killed his family in the countryside of Damascus, Jobar 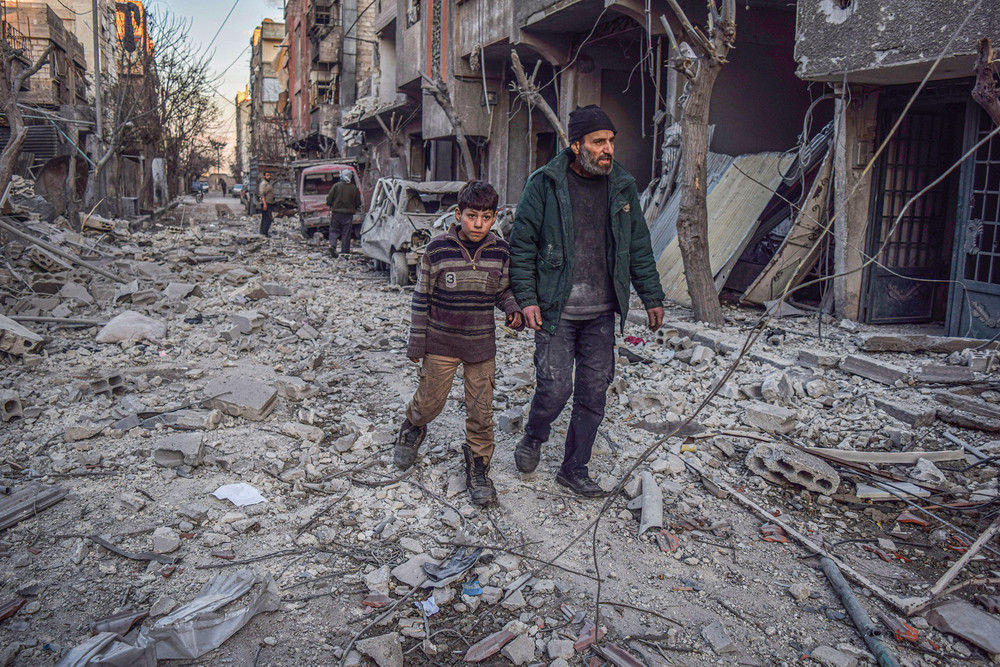 A child walks with his father in the city of Douma in the countryside of the Syrian capital, Damascus, after the destruction of the neighborhood in which they live 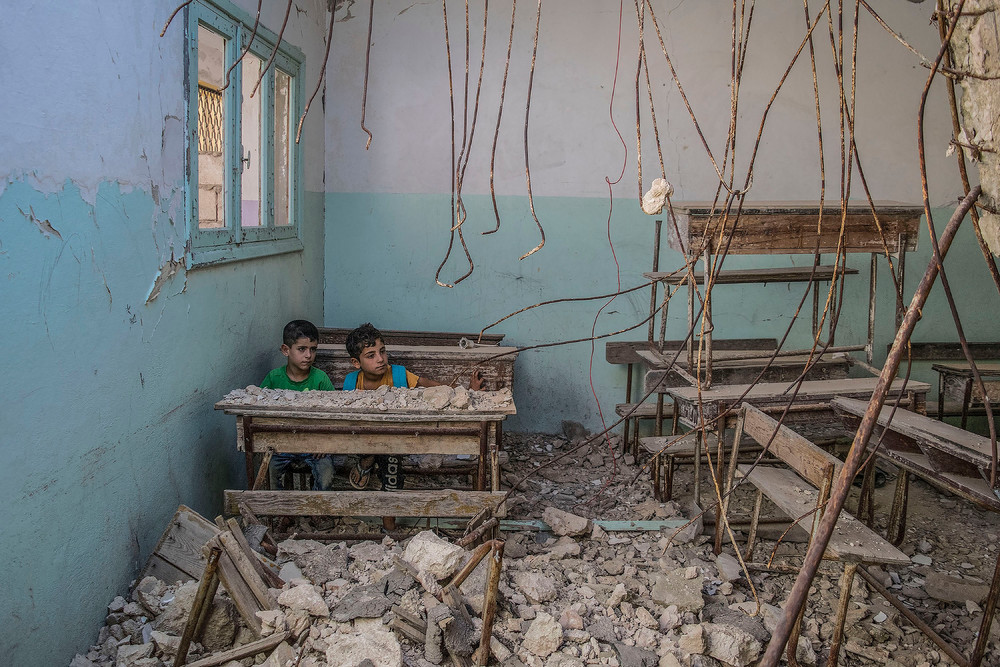 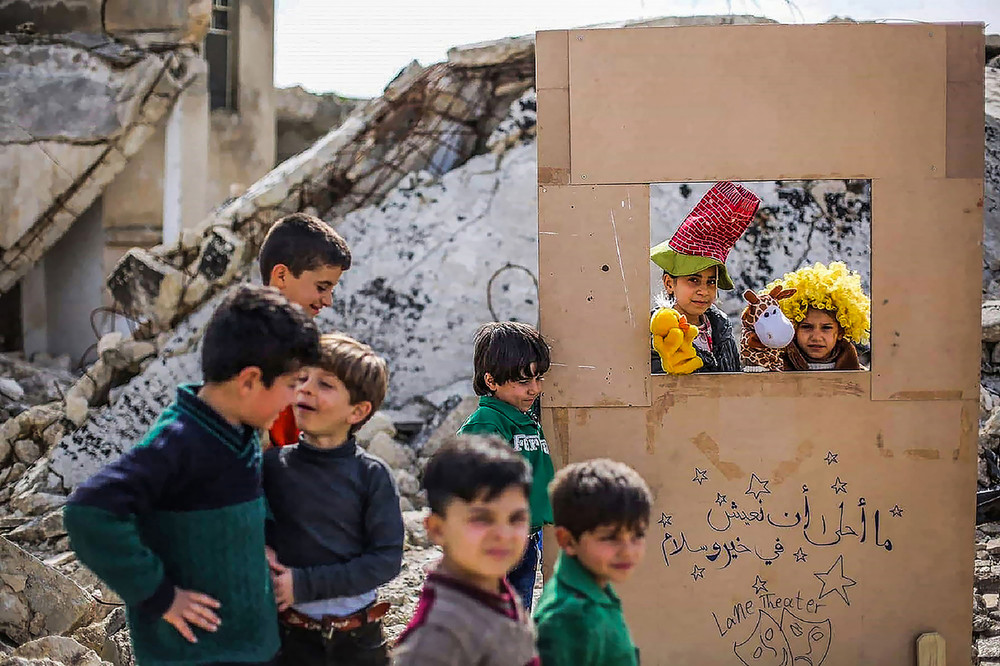 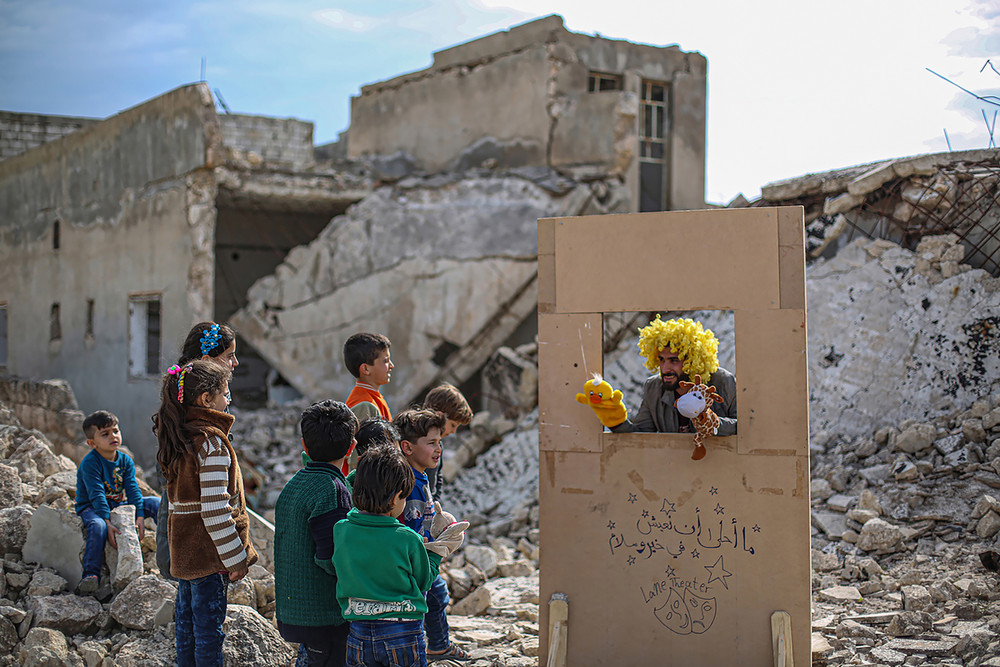 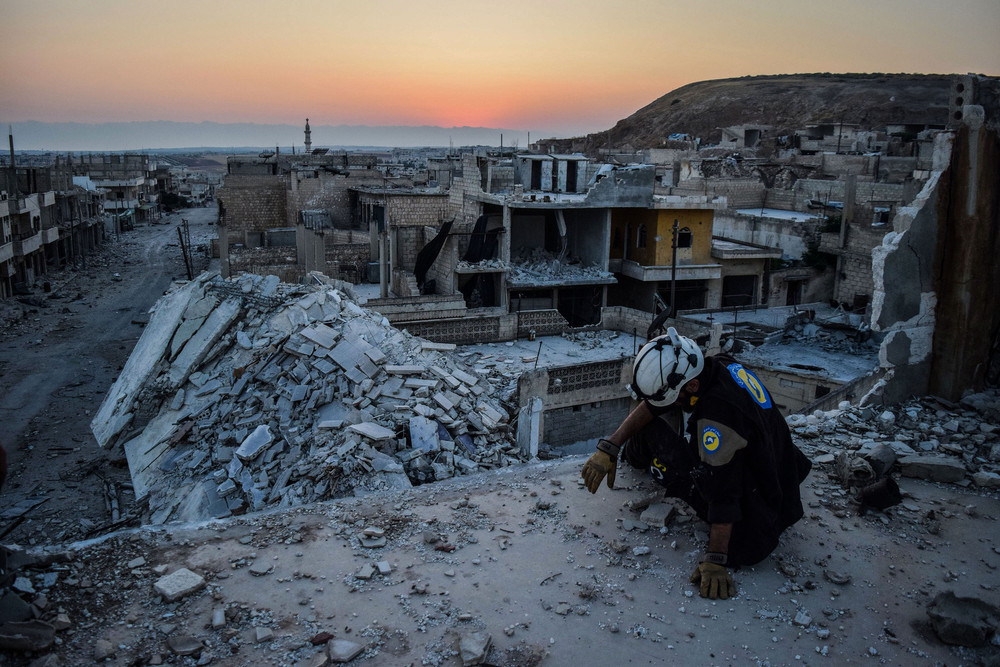 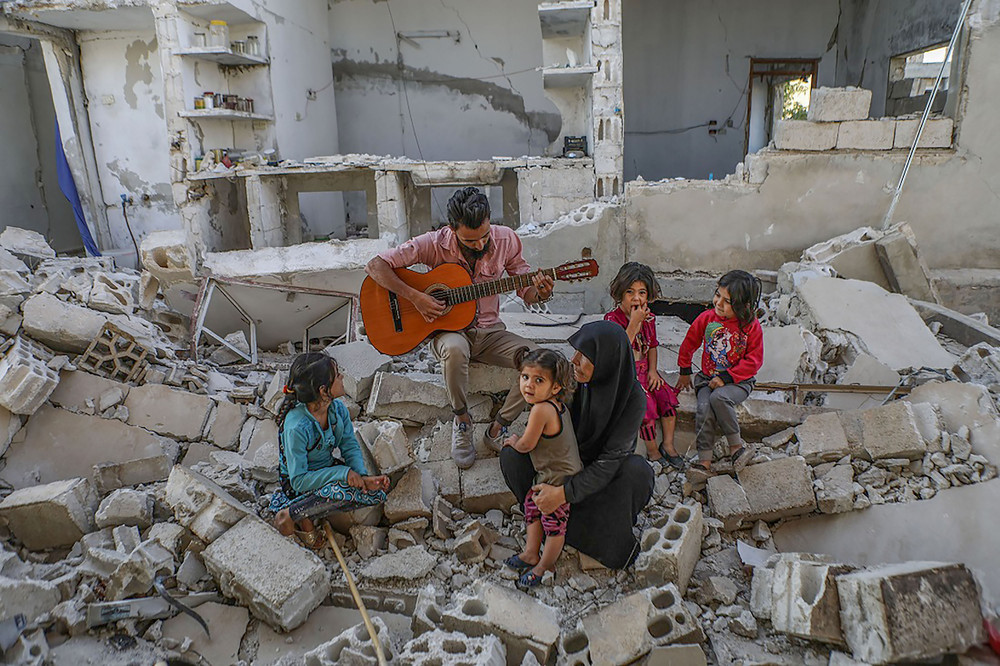 In the circumstances of the coronavirus, the young Muhammad, who is a violinist in Germany, decided to return to get people out of the atmosphere of war by playing melodies. 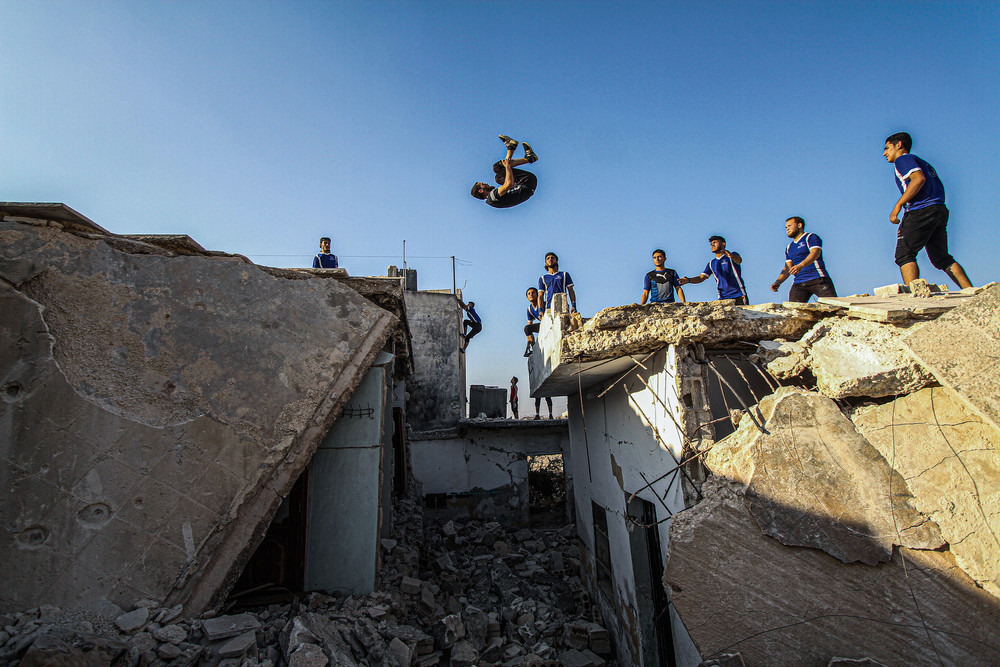 Young people playing parkour over destruction, as her dream was to play like world players, but the war prevented them

Muneb Nassar, born in 2001, is a photojournalist covering news stories with a focus on social issues. He is currently working in Turkey as a freelance photographer who mostly works for Anadolu ajansı, Zuma Press and many other international agencies.

He began his career in photojournalism as a photographer and independent reporter in 2014, where he covered life under siege in Douma, Eastern Ghouta, Idlib and the countryside of Aleppo until early 2020.

He documented massacres, destruction and life, people affected by air strikes and bombing
almost daily. During the ten years he lived under siege in his city, he won many international awards.